A biosensor for the direct visualization of auxin - Nature

A genetically encoded sensor for the quantitative visualization of auxin distribution in plants enables real-time monitoring of its uptake and clearance by individual cells and within cellular compartments.

One of the perks of interdisciplinary floors hosting a wild mix of workgroups is the common coffee corner which is a melting pot of scientific ideas and insights. It so happened that one side of the table was rambling on about the beauty and engineering of molecular sensors that merge ligand sensitivity with the unique properties of fluorescent proteins, and the other side of the table, opposite of the traditional Monday cake, was fantasizing about visualizing a plant hormone named auxin. Indeed, this molecule, more precisely named indole-3-acetic acid, is the holy grail of plant physiology, virtually affecting almost every aspect of plant life. Surprisingly, to date all visualizations of auxin distributions are only indirectly inferred from auxin’s effects. This knowledge gap is critical, since likely the link between the auxin response machinery and the actual auxin concentration is not linear. So the chit-chat at the coffee table was the beginning of an unexpected collaboration between plant physiology (Gerd Jürgen's group) and protein engineering (Birte Höcker's group). The aim: designing a molecular sensor that would allow direct visualization of auxin distributions in transgenic plants using fluorescence imaging, thereby enabling observations in real time.

There are two key elements to this class of sensors: a receptor which binds the target ligand, in this case auxin, and relays the binding to the readout – for example members of the green fluorescent protein family. Often structural rearrangements of the receptor yield changes in the fluorescent proteins and thus a measurable readout. We considered a number of options to construct our auxin sensor. One possible approach would be the use of plant proteins that are known to bind auxin. But besides the complexity of those proteins and their limited structural rearrangements, they are part of the plant´s physiology and might lead to interference with the auxin response. Thus, we researched precursor molecules of the auxin synthesis and their respective binding proteins available in other organisms allowing for a fully orthogonal sensor approach. In the end, the solution was tryptophan and the bacterial tryptophan repressor, which undergoes a structural change upon binding its ligand. We were lucky, as those changes had already been exploited for a tryptophan sensor (Kaper, PLoS Biology, 2007). The next step was the most challenging effort: alter the binding from tryptophan to auxin and, importantly, engineer high specificity and affinity of the intended auxin sensor. Tryptophan and auxin are chemically relatively similar (Fig. 1a). We approached the problem from two directions, using computational binding pocket engineering and a directed evolution approach – i.e. more or less targeted mutagenesis paired with constant probing of the specificity and affinity. While the computational approach showed no apparent success, directed evolution was successful. Ole Herud-Sikimic powered by constant sugar intake and our crazy parallelization approaches in performing mutagenesis, E. coli transformations, protein purification and testing en gros (Fig. 2a), steadily produced sensor variants that gradually lost their tryptophan affinity and became nearly exclusively specific for auxin. In total, more than two and a half thousand variants were manually created and tested using almost one and a half thousand primers – at some point no laboratory assistant was willing any more to fulfill Ole’s constant need for competent cells. And he had to find more tricks, like use less permanent marker to speed glassware cleaning or cutting tube lids to speed up DNA extraction. Additional, scientific challenges came from the fact that developing biosensors for plants is far less established than for mammalian systems. Nonetheless, the brute-force approach yielded AuxSen – the first direct sensor for the ubiquitous plant hormone auxin (Fig. 1b). The first proof of the performance of AuxSen we got from fluorescence activated cell sorting (FACS) when Kenneth Berendzen used his modified cytometer to quantify the FRET ratio in Arabidopsis thalianaprotoplasts. Yet this was just the beginning.

We obviously wanted to understand why our computational engineering fell short of the sheer will-power of a PhD student and further unravel how we changed and fine-tuned specificity and affinity. To this end, Sooruban Shanmugaratnam and me undertook endless (equally sugar driven, Fig. 2b) night-shifts at the Swiss Light Source (and once BESSY in Berlin) to trace as many of the engineering steps by determining the crystal structures of the variants. Already very early on, we found the solution to the bad computational performance: in the wildtype tryptophan repressor, which already binds auxin, albeit with very poor affinity, the auxin molecule is bound in a 180° flipped configuration compared to tryptophan – however, the tryptophan configuration was the basis we used for our models. The subsequent mutants that were identified stabilized this flipped orientation and ultimately completely blocked the tryptophan configuration and with this the affinity to tryptophan (Fig. 2c). A further difficult aspect for computational approaches was that the major stabilization of the auxin configuration came from an arginine residue – the amino acid with the highest degree of freedom in the whole set of natural amino acids – thus presenting a challengingly large set of orientations for the algorithm to explore. However, each new structure over the course of our work elucidated new vantage points and enabled us to focus and optimize the mutational approach. Ironically, we could have guessed the flipped auxin position since in 1988 a difference density map already suggested such a binding mode for another indole derivative (Lawson, Nature, 1988) – however, the structure was never deposited. A Cheers! to good literature research.

Now, the only thing left to do was prove the ability of AuxSen to report auxin distributions live in planta. Making the transgenic lines (Fig. 3a) was a challenge in itself and required another heroic high-throughput effort using Agrobacterium tumefaciens transformations and monitoring of the seedlings. Martina Kolb mastered this remarkably challenging and delicate imaging task and selected the best lines from more than 200 transformants. But, all´s well that ends well, we also tackled this challenge.

Of the many experiments done, our live monitoring of the gravitropic response was definitely the most impressive and insightful, in experimental setup as well as in scientific finding. Gravitropism is the ability of plant roots to always find their way back to the soil by identifying the gravity vector, even if the root is completely pointing in the wrong direction and is exposed e.g. after an earthquake. Christian Feldhaus used Fischertechnik® construction toys from his kids, pimped with some Thorlabs® parts, to construct a 90° tilted confocal imaging setup that enabled us to rotate the specimen around the horizontal axis while imaging (Fig. 3b). For the actual imaging we again had to find a number of nifty little tricks, like building a reservoir for the plant under the microscope for the long imaging sessions, fixing the root with double sided tape and especially preventing any premature perturbation of the orientation. But then, armed with a stop watch, Martina imaged the auxin distribution, then rotated the plant and re-imaged. To our great surprise, a process that was thought to take much longer seems to happen within a minute or so – so fast that we could barely follow with our imaging. The auxin redistribution machinery in plants is actually very fast-responding, allowing the plant to monitor gravity and its own position in 3D-space almost in real time (Fig. 3c).

This was our most unexpected finding thanks to AuxSen, but it will definitely not be the last. There are surely many secrets in plants that can now be visualized and unraveled using AuxSen.

As an afterthought: when going through our data deposition the earliest file from this project was dated 2012. This is also an inspiring thought for all young researchers: Never give up hope – good work will get published eventually! 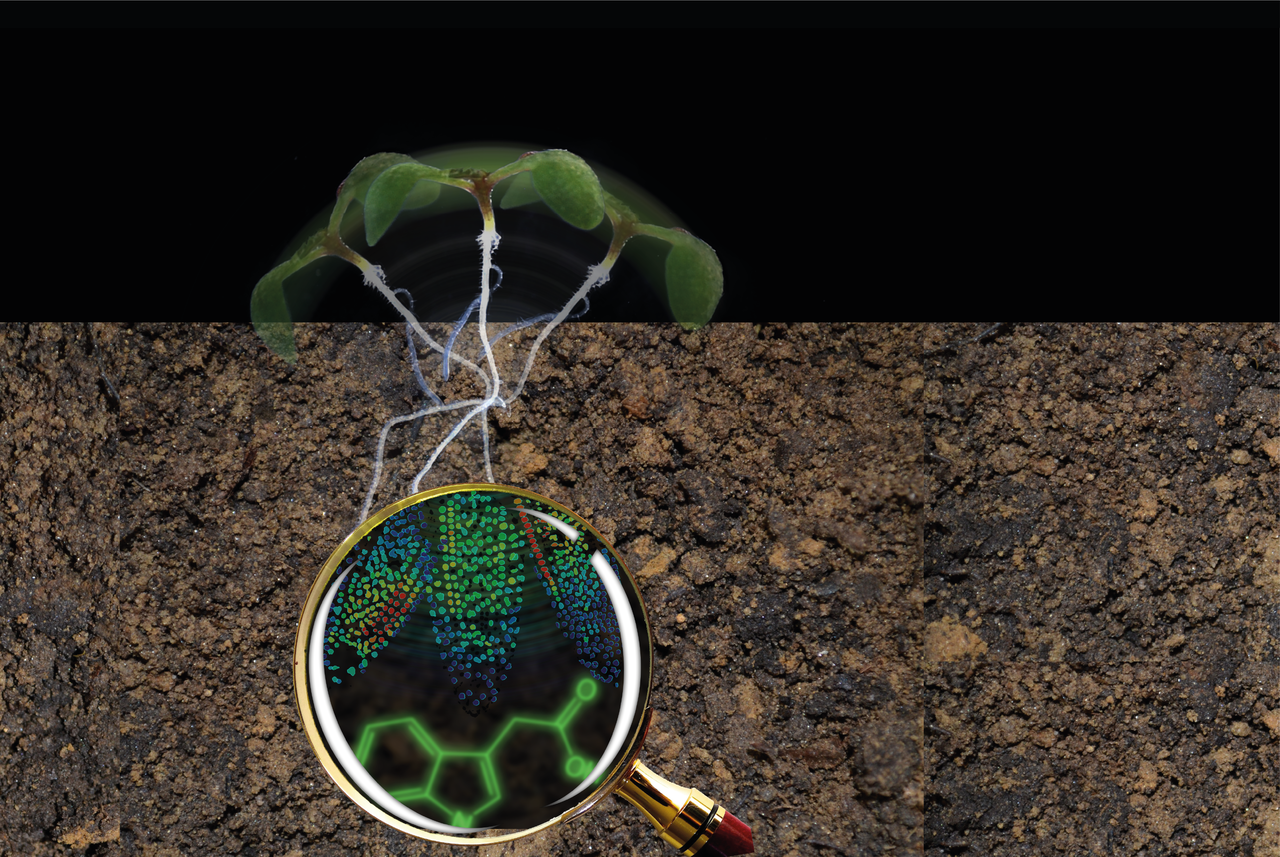 The development of AuxSen - the first direct transgene biosensor for the ubiquitous plant hormone auxin.