How to steer a living cell like a ship

The design of feedback biomolecular controllers is essential to synthetically regulate biological processes in a robust and timely fashion. Here the authors introduce a wide array of biomolecular Proportional-Integral-Derivative (PID) controllers that are capable of enhancing stability and dynamic p…

In 1922, Nicolas Minorsky wrote for the first time the mathematical law for what we now refer to as proportional-integral-derivative (PID) control. This ubiquitous scheme is at the heart of a three-part feedback regulation strategy that was first developed by Minorsky while working on automatic ship steering systems. Today, more than 95% of all industrial feedback control systems employ this PID control strategy.

One hundred years later, control theorists working in the field of synthetic biology are attempting to genetically engineer PID control systems inside living cells [1-5]. Such systems promise to achieve robust and precise regulation of cellular processes, with many potential applications in industrial biotechnology and medical therapy. But why PID, you may ask, and how is it different from the more familiar negative feedback strategies? The integral term of a PID controller gives robust perfect adaptation, a highly desirable property when regulating key variables of interest (e.g. species concentrations). The proportional and derivative terms, add to perfect adaptation enhanced dynamical stability, good transient dynamic performance, and noise rejection properties.

There is no shortage of challenges engineering PID control systems in living cells: Unlike their electronic/mechanical counterparts, genetic PID control systems must contend with the unique environment of the cell. In such an environment, the variables one works with are concentrations or reaction rates, and therefore they can only be positive. In addition, all mathematical operations must be achieved through biochemical reactions, which aside from being nonlinear exhibit noisy dynamics. Parameters are difficult to design and measure, and cellular resources are scarce and must be shared. In spite of these challenges early progress has shown that integral [1,2] and proportional-integral [3,4] genetic control systems can be successfully engineered in living cells. To date, no synthetic genetic PID control system has been built and demonstrated.

Synthetic PID controllers aside, one wonders if nature has evolved PID control in natural biological systems. While PI control systems have been observed in several biological regulatory mechanisms, I suspect that the answer is ‘Yes’ also for PID controllers. After all, when Minorsky set out to write the mathematical laws of PID control, he was just putting into equations his observations of an experienced helmsman steering a ship! 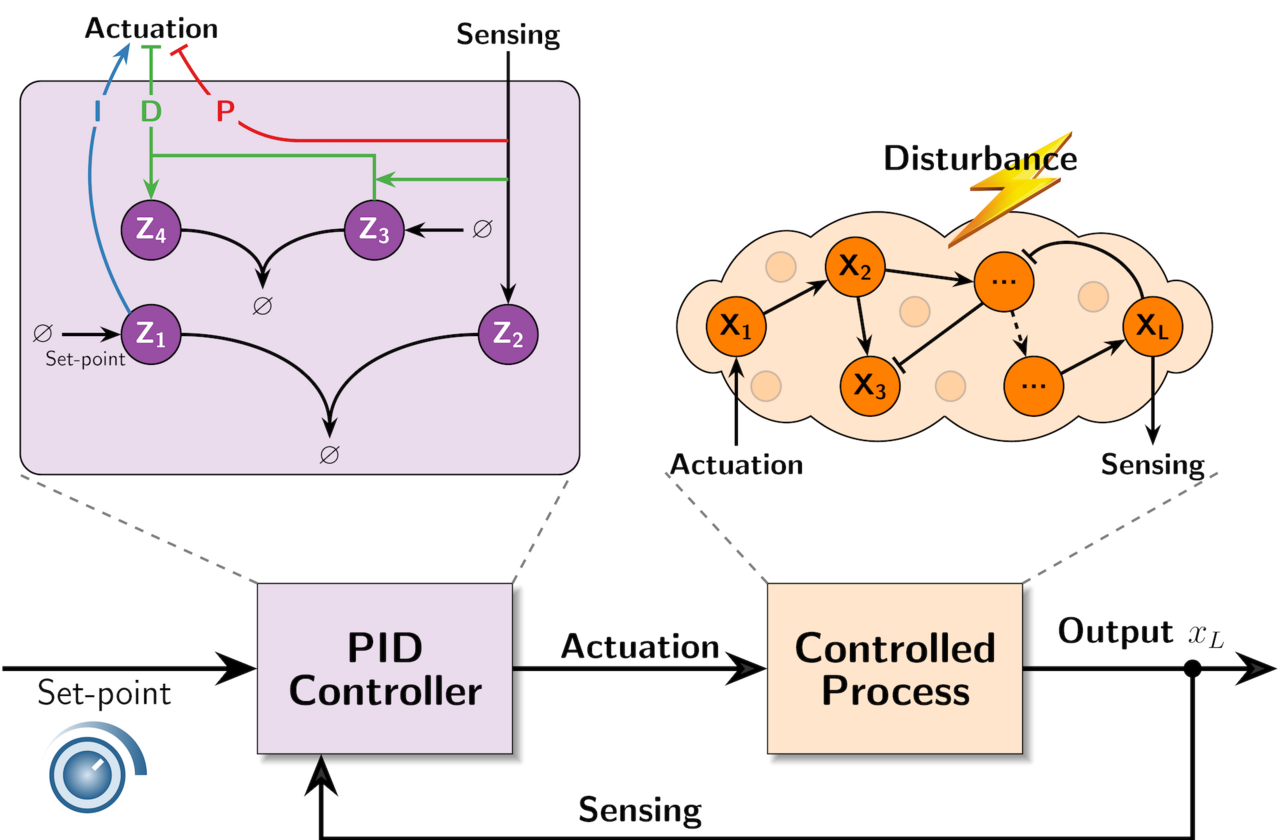 How to steer a living cell like a ship

We present a roadmap for realizing proportional-integral-derivative (PID) cybergenetic controllers in living cells.