A comprehensive understanding of mammalian biological function and disease etiology requires the real-time visualization of molecular and cellular events in deep tissues of intact living organisms. The Nobel-prize winning discovery of the green fluorescent protein (GFP) spurred the development of a wide array of genetically-encoded fluorescent biosensors that enabled researchers to visualize specific molecular and cellular events in transparent biological systems. However, such biosensors have limitations in imaging opaque organisms such as humans, due to the poor penetration of light through biological tissue1. On the other hand, ultrasound is one of the most widely used non-invasive biomedical imaging modalities that provides excellent tissue penetration, but is limited in terms of its ability to resolve molecular scale events. Could we get the best of both worlds by developing next-generation biosensors that directly couple highly-penetrant sound waves to the specific activity or concentration of physiologically relevant molecules within deep tissue?

This was the question in our minds as we embarked on this ambitious journey to build the first genetically-encoded acoustic biosensors for ultrasound in the lab of Prof. Mikhail Shapiro at Caltech. Our efforts culminated in this paper, where we demonstrate the first use of nanoscale ultrasonic biosensors for dynamic imaging of different types of enzymatic activity. Below, we share some moments from our journey, and key breakthroughs along the way that helped us reach our goal.

Anupama: “When we started out, we had a GFP-equivalent for ultrasound named ‘gas vesicles’ or ‘GVs’- a unique class of hollow protein nanostructures naturally occurring in buoyant microbes (Fig. 1a), which could scatter sound waves to produce ultrasound contrast2. However, very little was known about whether GVs could be engineered to controllably modulate their acoustic behavior. The first challenge for me was to figure out how to tune GV properties at the level of its constituent proteins. The initial breakthrough came when we identified that removal or truncation of a surface protein named ‘GvpC’ on the gas vesicle shell made it less rigid, allowing it to buckle more easily under acoustic pressure and produce increased non-linear contrast3,4 (Fig. 1b). Co-authors Daniel Sawyer and David Maresca (now a professor at TU Delft) developed custom ultrasound pulse sequences to specifically distinguish this non-linear signal from linear contrast produced by GVs and background tissue4,5.

The next challenge was to engineer GV-based biosensors that dynamically change their non-linear acoustic contrast in response to the activity of specific molecules in the cellular environment. We designed these first biosensors to target enzymes, specifically proteases, as the initial targets because of the diverse roles they played in cellular processes, and as targets for drug discovery (Fig. 2a). After a lot of tinkering with the GV surface protein, we were finally able to develop engineered GVs that showed increased non-linear contrast upon calcium-activation of the calpain protease (Fig. 2b). That was an unforgettable moment when we realized that we had developed the first genetically-encoded biosensor for ultrasound imaging! Suchita Nety – a co-author and talented undergraduate researcher in our lab at that time (now doing her MD/PhD at MIT) – immediately followed up on the success of the calpain sensor by engineering an acoustic sensor of TEV protease. In order to extend our biosensor platform to detect the activity of different types of enzymes, we appended a degradation tag to the end of the surface protein to target it to the processive protease ClpXP. We were excited when this biosensor showed a whopping 10-fold increase in non-linear ultrasound contrast upon detecting ClpXP activity!”

Zhiyang: “When I joined the Shapiro lab, I was amazed by these ultrasound contrast agents that are literally grown within living organisms. The team had just published a seminal study on acoustic reporter genes (ARGs) - where they engineered the complex genetic machinery encoding gas vesicles in natural microbes, to heterologously produce GVs in probiotic bacteria6. Armed with my choppy high-school biology knowledge at that time (my undergraduate major was Physics) and under the able mentorship of Anupama and Mikhail, I ventured to introduce the acoustic biosensor designs into the ARG platform to make the first acoustic sensor genes inside bacteria, so that we could distinguish cells with different protease activity in vivo (Fig. 3a-b). There were many challenges along the way, which made me better appreciate the beauty and unpredictability of biological systems. Coming from a Physics background, I would easily get frustrated when biology experiments didn’t turn out as predicted and am very thankful to Anupama for helping me find a silver living during those difficult times. In fact, our idea for controllably ‘turning-off’ acoustic biosensors inside cells originated during one such brainstorming session after a failed experiment. Our co-authors Audrey Lee-Gosselin and Margaret Swift helped us with the animal experiments and Dina Malounda used in-house optimized protocols7 to generate large batches of GVs for our engineering and in vivo experiments. It was a great team effort to see this study through to completion.”

This paper establishes a new paradigm for ultrasound-based deep tissue imaging of molecular phenomena, and demonstrates the ability of these genetically-encoded acoustic biosensors to image the activity of different types of enzymes that are relevant to human health and disease. We envision that the design approach presented in this study could be extended to other proteases and biomolecules of interest in diverse applications ranging from monitoring the activity of natural and synthetic gene circuits within gut microbes to tracking extracellular enzymes and their roles in tumor progression and metastasis. 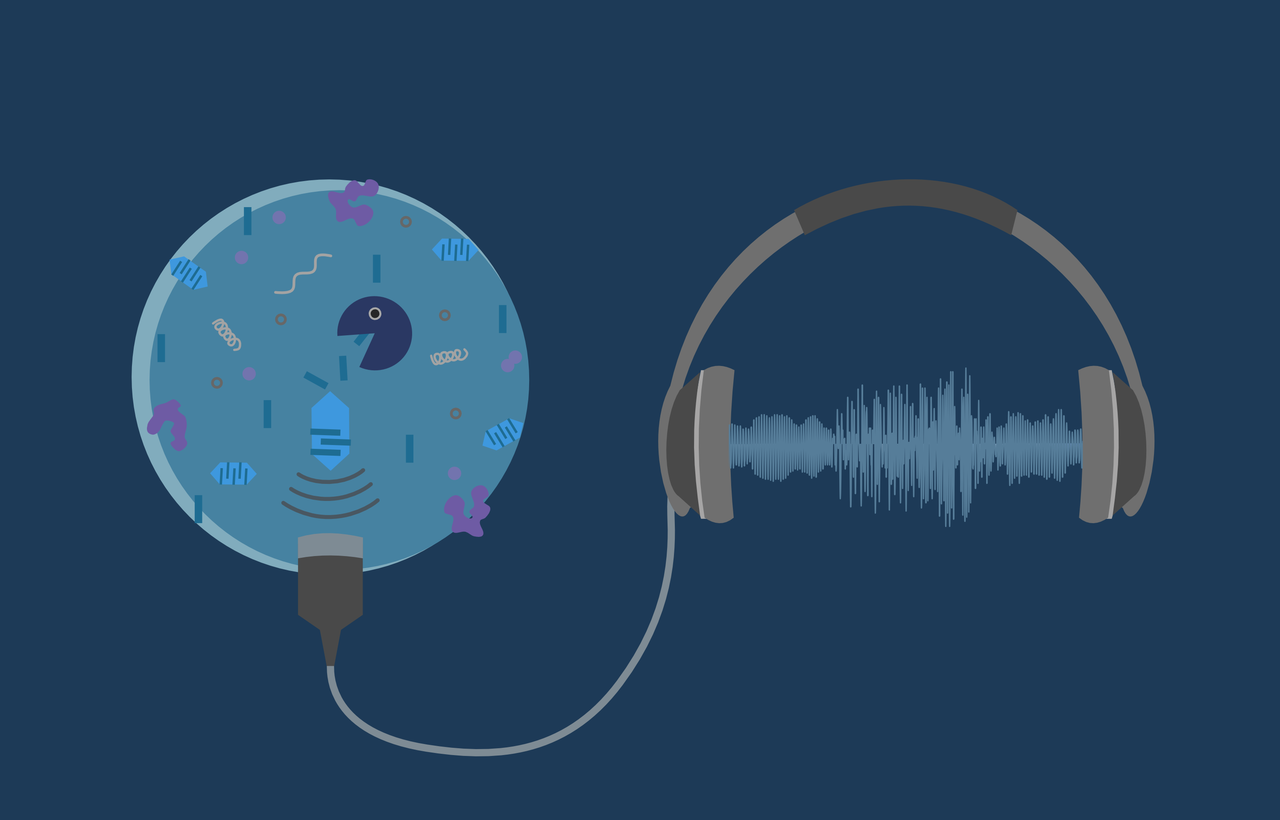