Certain human diseases are driven by genetic and cellular mechanisms that cannot be recapitulated with commonly used experimental animal models. The lack of an in vivo model represents a limitation for the elucidation of disease mechanisms, and for testing new therapies on a pre-clinical stage.

One of the areas of interest in our laboratory is the study of diseases that cause tissue degeneration. Tuberous Sclerosis Complex (TSC) is a multi-system incurable disease affecting approximately 1:7000 live births, that is caused by inactivating mutations in the genes Tuberous Sclerosis Complex 1 or 2 (TSC1, TSC2, respectively)1. Loss of either gene, profoundly alters cell behavior, causing uncontrolled tissue growth and tumor formation in the organs affected2. In the kidney, loss of TSC1 or TSC2 can cause a variety of renal diseases, depending on the cell type affected3,4. The two most common renal diseases observed in patients with TSC are benign tumors known as angiomyolipoma that can cause spontaneous life-threatening bleedings, and epithelial cysts that can alter nephron activity. While the mechanisms of cystic disease are better understood thanks to the existence of animal models that reproduce them, the cellular and molecular mechanisms driving angiomyolipoma remain unknown. This is largely due to the fact that there are no appropriate experimental ways to replicate these tumors in the laboratory.

The absence of experimental models to investigate angiomyolipoma has greatly hampered our ability to understand how these tumors form and what proteins could be suitable therapeutic targets. Current pharmacologic treatments rely on the use of a family of drugs called rapamycin analogs that slow down tumor growth but can also cause a number of undesired effects5. When treatment is interrupted, due to the adverse effects, tumors can re-grow5-7. These limitations clearly highlight the need to better understand the pathobiology of renal angiomyolipoma, for the design of more effective therapies.

We devised an idea to reproduce renal angiomyolipoma in our lab, through differentiation of induced pluripotent stem cells (iPSCs) carrying inactivating mutations in the TSC2 gene. For that purpose, we directed the differentiation of iPSCs toward the renal lineage, using a combination of protocols previously designed by other research groups8,9. We combined parts of different protocols to optimize the generatioin of kidney tissues from TSC2null iPSCs and initially noticed that the resulting nephrons had a striking phenotype, that is that the tubules formed prominent cysts that resembled the cysts seen in TSC patients.

While exploring the microanatomy of TSC2null iPSC-derived tubule cysts in three-dimensional renal organoids, we discovered that TSC2null organoids contained a population of cells with a dual melanocyte-like and smooth-muscle-like phenotype. These cells do not exist in the normal kidney, or in TSC2+/- kidney organoids isogenic to the TSC2null ones, but are a hallmark of angiomyolipoma tumors found in the kidneys of TSC patients10,11. The presence of these cells alone, therefore was a strong indication that we were capable of replicating a developmental process leading to formation of angiomyolipoma. We were capable of validating this finding using multiple orthogonal approaches, including techniques such as whole-transcriptome sequencing, flow cytometry, and western blot. Altogether, the results confirmed that we had been able to replicate human renal angiomyolipoma in vitro, through nephric differentiation of TSC2null iPSCs. 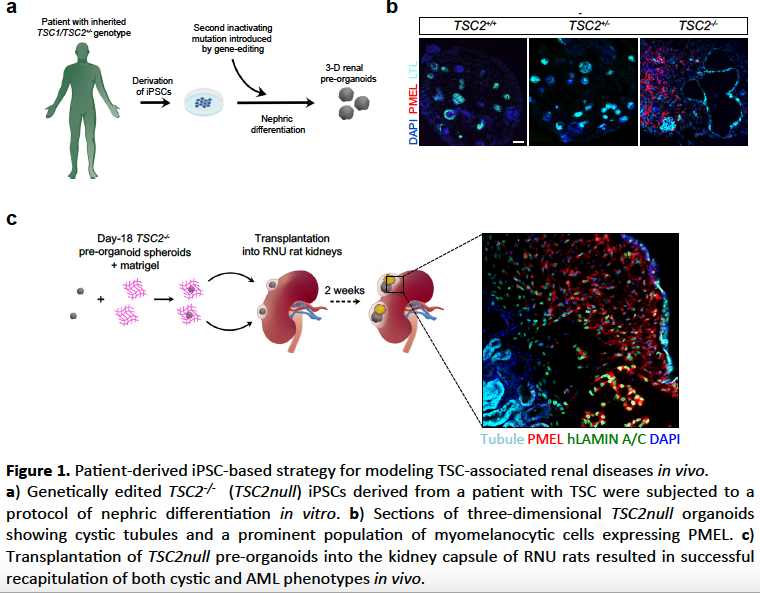 Given that global biallelic inactivation of TSC1 or TSC2 during development causes embryonic lethality, and that tissue-specific Cre-mediated deletion requires the identification of the tissue of origin, modeling angiomyolipoma in vivo has remained practically impossible. Therefore we reasoned that we could generate an animal model of renal angiomyolipoma in which we could perform mechanistic studies and test new therapies. We transplanted multiple renal angiomyolipoma pre-organoids under the kidney capsule of immunodeficient RNU rats using matrigel as the supporting matrix. This orthotopic graft approach allowed angiomyolipoma organoid formation in the kidney microenvironment, in the presence of systemic signals and tissue microenvironment components by the host. We found that this strategy resulted in vascularization of angiomyolipoma organoids and in significant acceleration of organoid growth, while preserving the in vitro phenotype. Thus both prominent epithelial cysts and angiomyolipoma cells were observed in the grafts, two weeks after transplantation, compared to control grafts that contained either TSC2+/-, TSC2+/+ organoids derived from isogenic iPSC lines.

The successful recapitulation of TSC-associated renal angiomyolipoma by the human tissue grafts in the rat kidneys prompted us to investigate a local approach to could ablate angiomyolipoma rapidly. We reasoned that in order to reduce systemic delivery of rapalogs, we could inject nanoparticles loaded with rapamycin to the grafts. Using this local nanodose delivery approach, we observed rapid ablation of angiomyolipoma organoid grafts within seven days of treatment, without affecting the neighboring rat kidney cells. Our inspection of the graft tissues at days three and seven of treatment showed that the rapamycin-loaded nanoparticles effectively induced cell death in angiomyolipoma cells, which explained the graft shrinking observed. The high effectiveness of this treatment led us to new ideas for future nanotherapies for angiomyolipoma. 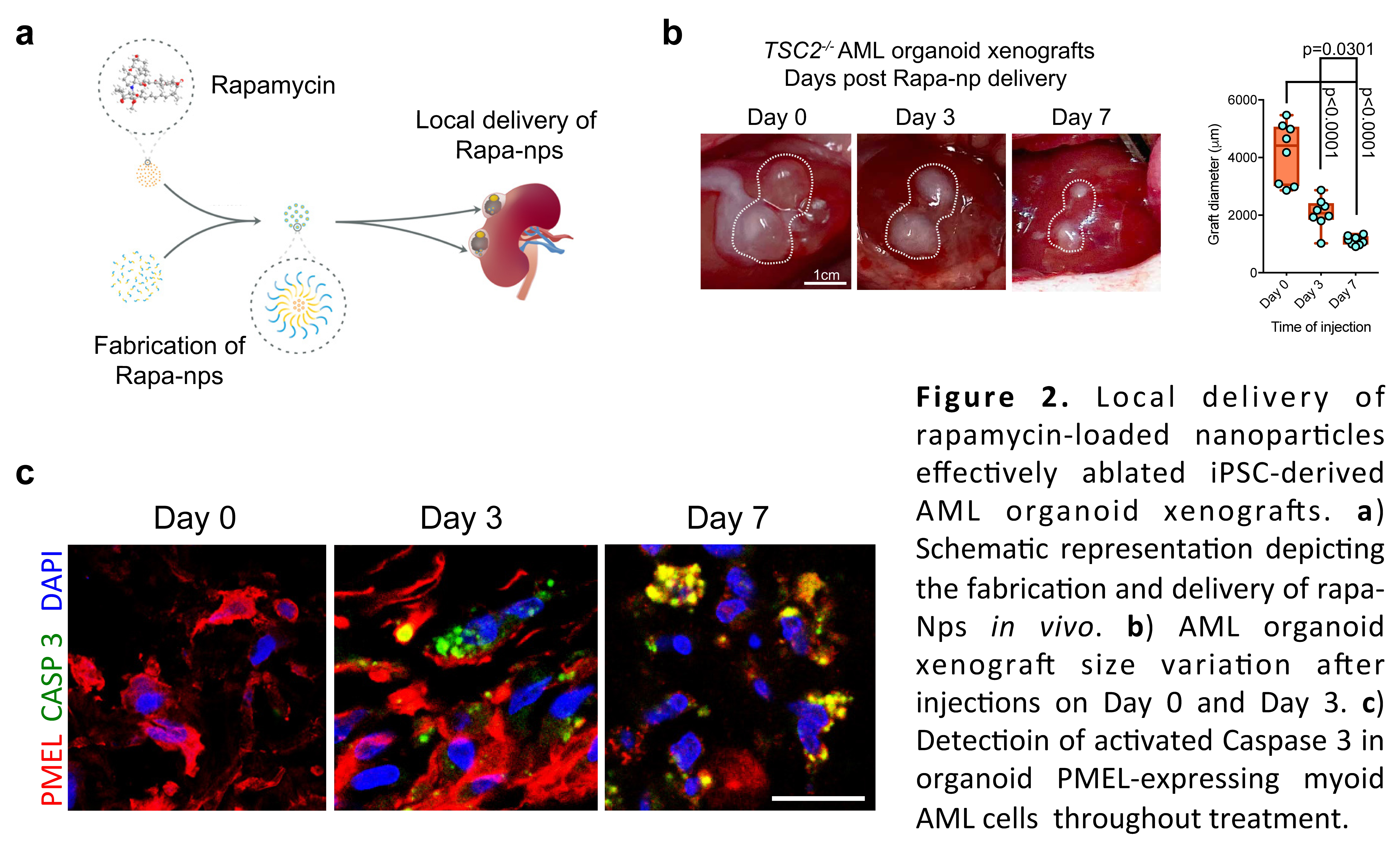 Critical to understanding why our nanoparticle approach was so effective was the identification of a molecular mechanism in the grafts preventing cell apoptosis. This mechanism was previously described for other tumors12,13, and involves upregulation and cytoplasmic accumulation of CDKN1A/p21CIP1 sequestering Caspase 3 and preventing apoptosis. Upregulation of CDKN1A and cytoplasmic localization of p21CIP1 was also observed in angiomyolipoma from the kidneys of patients with TSC. These results were particularly important as they showed that our angiomyolipoma organoid model can be used to identify novel molecules and pathways of interest for targeting angiomyolipoma more effectively in patients. 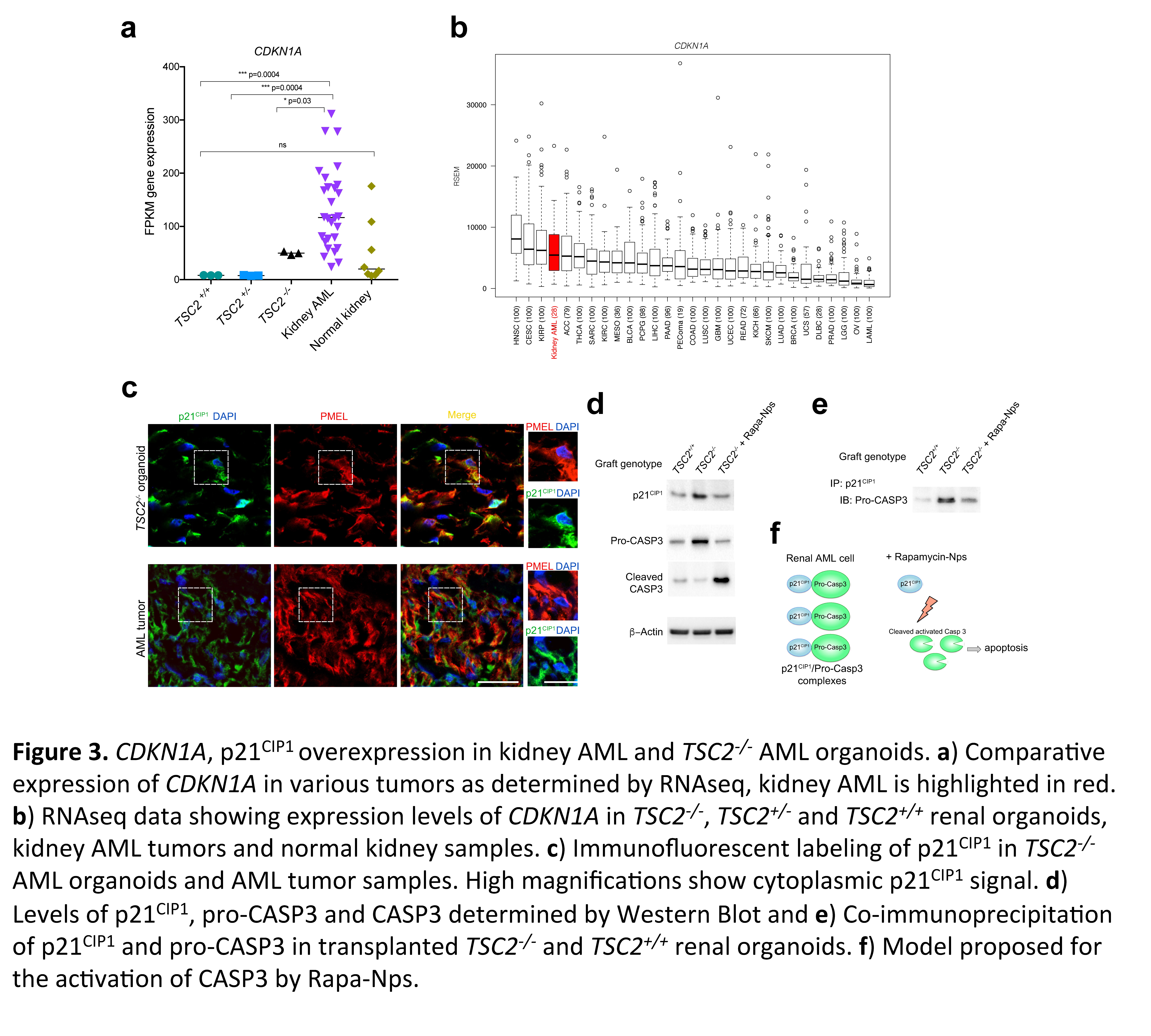 To summarize, we could say that the value of our work resides in three key aspects, firstly it is a landmark in human renal disease modeling in vivo using kidney organoids, secondly it constitutes the first effective recapitulation of TSC-associated rare disease using iPSCs, and thirdly it provides clues toward previously unknown disease mechanisms and prospective therapeutic approaches to target them. 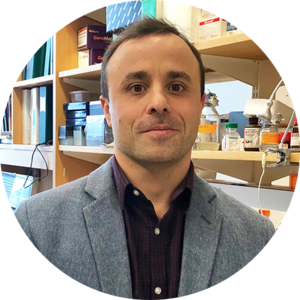