Inspired by the bacterial genius, opportunities are abound to harness nature’s nanoscale designs for biotechnological applications. Here we have developed a bacterial protein nanopore comprising a dual constriction and show how this improves sequencing accuracy in homonucleotide stretches

At the VIB-VUB Structural and Molecular Microbiology lab we investigate the interaction of bacteria with their environment. The curli secretion-assembly system is a specialised pathway found in Gram-negative bacteria to secrete functional amyloids, dubbed ‘curli’, which are used as adhesion and biofilm patterning material (Chapman et al. 2002). Central to this pathway is an enigmatic secretion channel, CsgG, which transports unfolded curli subunits across the outer membrane (Goyal et al. 2014). To do so, the CsgG channel features a sharp, 9 Å wide constriction that forms the narrow point for the passage of the curli subunits. This same design makes CsgG an attractive tool for nanopore sensing applications such as DNA/RNA sequencing. Engineered CsgG-based nanopores have been implemented in commercial nanopore sequencing platforms developed by Oxford Nanopore Technologies (ONT) since 2016 (Brown & Clarke 2016). Nanopore sequencing offers single-molecule long-read sequencing in a high throughput and portable manner. However, one of the main challenges in the field is the ability of nanopores to accurately call sequences of low complexity, especially stretches of homonucleotides (Jain et al. 2016; Carter & Hussain 2017). The main reason is that as a train of identical nucleotides passes the nanopore constriction, the electric signal coming off the pore is uniform and makes determining the homopolymer length error prone.

In my PhD project I set out to study the CsgG interaction partner CsgF, a surface-localised protein that is involved in coupling curli subunit secretion to curli self-assembly at the cell surface (Nenninger et al. 2009). As part of my search for a molecular understanding of this process, I solved the cryo-EM structure of CsgG in complex with CsgF. This showed that the CsgF N-terminus binds deep inside the CsgG channel and forms a second sharp constriction point, spaced ~25 Å from the CsgG constriction. This remarkable architecture prompted us to investigate if the CsgG-CsgF complex could be used to build a nanopore with a dual constriction. When using nanopores as an analytical tool for passing molecules such as a DNA polymer, the channel constriction gives a dominant contribution in the electrical signals. Theoretically, two constrictions should be better than one as the passing polynucleotide is read out twice (Stoddart et al. 2010), although a successful implementation of this concept in DNA sequencing had been lacking until now.

In our paper entitled "A dual-constriction biological nanopore resolves homonucleotide sequences with high fidelity" published in Nature Biotechnology, we now combine the CsgG channel with peptides corresponding to the CsgF N-terminus, dubbed CsgF constriction peptide or FCP. This way, we were able to form robust protein nanopore complexes with a regularly spaced, dual constriction. In collaboration with ONT, we next continued to test this prototype nanopore for sequencing performance. For this, FCP was reconstituted with R9.4, the then current CsgG-based nanopore used in the commercial ONT devices. 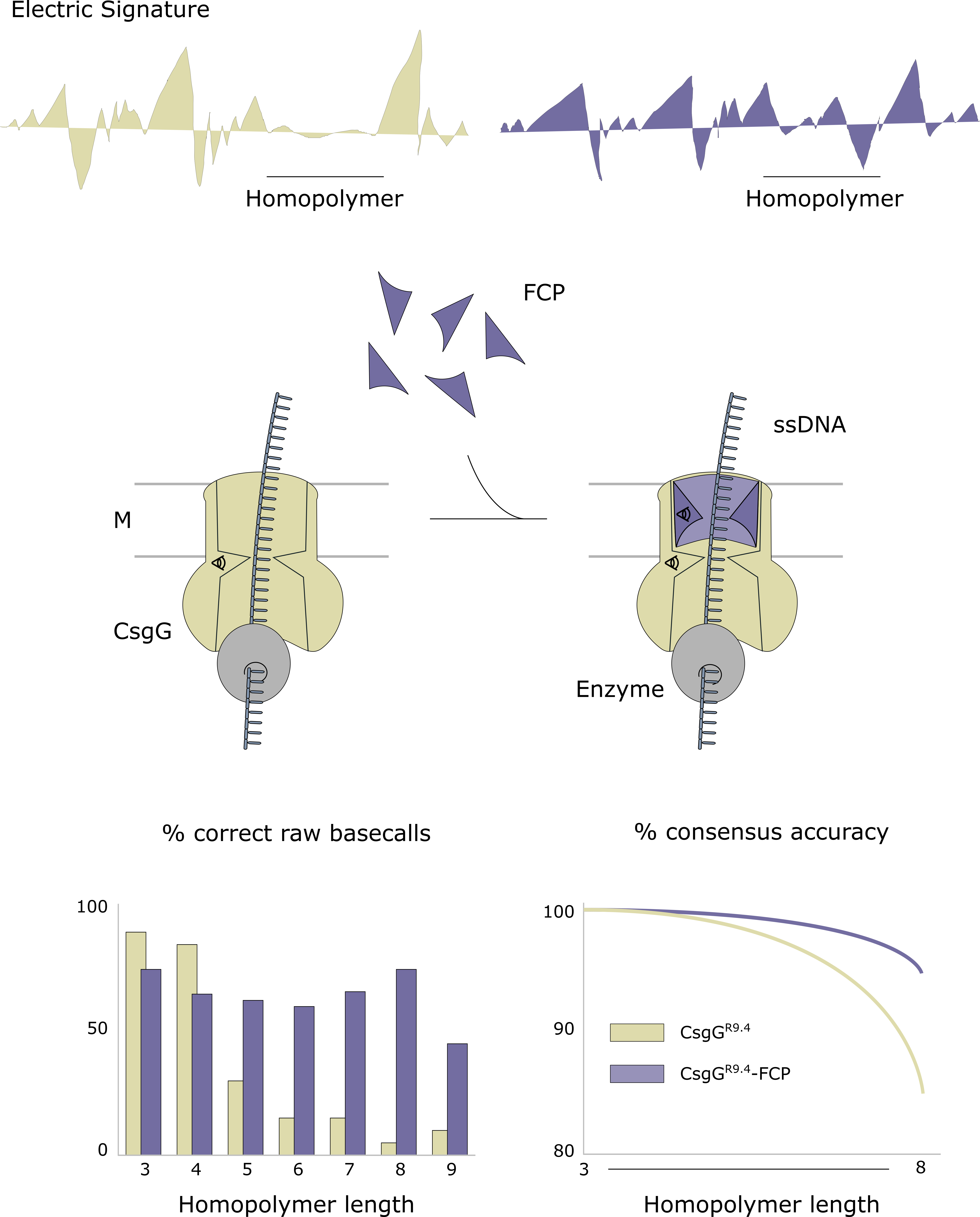 The CsgGR9.4-FCP complex proved stable under experimental conditions for sequencing and recruited and passed single stranded DNA similar to the R9.4 parent, albeit with lower basal conductance levels. Nevertheless, the consensus sequencing accuracy of the CsgGR9.4-FCP complex approached the accuracy of the CsgGR9.4 standard. Most interestingly, when compared to the R9.4 standard, our prototype dual constriction nanopore showed a large improvement when sequencing homopolymer regions. The single read accuracy in homonucleotide regions improved by 25 to 70% for up to 9 nucleotides, which translated to a substantial improvement in consensus sequencing over the standard pore. Future, dedicated engineering of the dual constriction pore may further boost the pore’s performance.

Now in the finale of my PhD, I am excited to see that my fundamental exploration on the curli assembly system might translate to a tangible application with a chance to affect research worldwide. I hope that at its full potential, the CsgGR9.4-FCP pore could aid reading over low complexity and repetitive regions in the genome, an outstanding challenge in the sequencing field.