Gut-brain-axis harbingered the birth of a new tool, since the reporting of influence of gut microbiome (GM) on the brain. While correlation of GM to neuronal health is known, safe management strategies by leveraging GM holds potentials to tackle from neurodevelopmental to neurodegenerative diseases.
Samuel JK Abraham
Clinician- Scientist, Yamanashi University & GNC Japan
Follow
Like Liked by Evelina Satkevic and 3 others
0

Benefits of Gut Microbiota Reconstitution by Beta 1,3–1,6 Glucans in Subjects with Autism Spectrum Disorder and Other Neurodegenerative Diseases - IOS Press

Background: Aureobasidium pullulans (black yeast) AFO-202 strain-produced beta glucan, Nichi Glucan, has been shown to improve the behavior and sleep pattern along with an increase in α-synuclein and melatonin in children with autism spectrum disorde

Complexities of the central nervous system was one of the reasons, we haven't got much insight into ways and means of managing the diseases of the brain since its development through aging, which probably could have triggered the research of an indirect insight of studying the influence of Gut Microbiome (GM) on brain. Gut-brain-axis being the harbinger of further research and evolution of gut-multiorgan-axes, the functional diseases of the brain due to its chemically driven psychological and psychiatric effects is another important phenomenon that has more relevance to the GM.

A beneficial manipulation of the GM has been through either a probiotic dose of "good" GM or a Fecal Microbiome Transplant (FMT) which again is of "good" GM. However, a much fundamental and safe approach through a prebiotic when could yield  the control of Enterobacteriaceae, the "bad" GM (1) which correlated with an improvement in the behavior as per CARS score (2), sleep pattern and quality, beside endogenous melatonin in the plasma (3), my thought moves one step back to see the possibility of this bad GM control much earlier, either at an younger age postnatally or during the intra-uterine stage itself. This idea finds it worth based on reports that the maternal gut dysbiosis has a strong correlation to neurodevelopmental illnesses (4) and that in mice models, a filamentous gut bacteria secreted-cytokines could travel across the placenta, cross the blood-brain-barrier and resulted in an offspring that had symptoms mimicking Autism Spectrum Disorder (ASD) after birth (5).

Should the "bad"  Enterobacteriaceae GM during the gestation be a cause of neurodevelopmental anomaly in the fetus, obviously, the gut health of the mother should attract the attention of the global community of reseachers on evaluating (i) the reasons behind the increase of Enterobacteriaceae in one's gut, specially as a part of antenatal care and (ii) methods of controlling them in a safe manner without adverse reactions to either the mother or the developing fetus.

Importantly, the diagnosis of neurodevelopmental illnesses like ASD should include the evaluation of GM as an integral component, enable us plan interventions to control the Enterobacteriaceae kind of bad GM, which may help improvements as reported above. In addition to such benefits, the spread of aggregated curli, amyloid and misfolded alpha-synuclein to the brain as prions, if could be prevented, that would amount to a prophylaxis in neurodegenerative diseases like Parkinson's disease and Alzheimers disease, because children with ASD are more prone to develop neurodegenerative diseases like parkinsonism later in adult life (6). 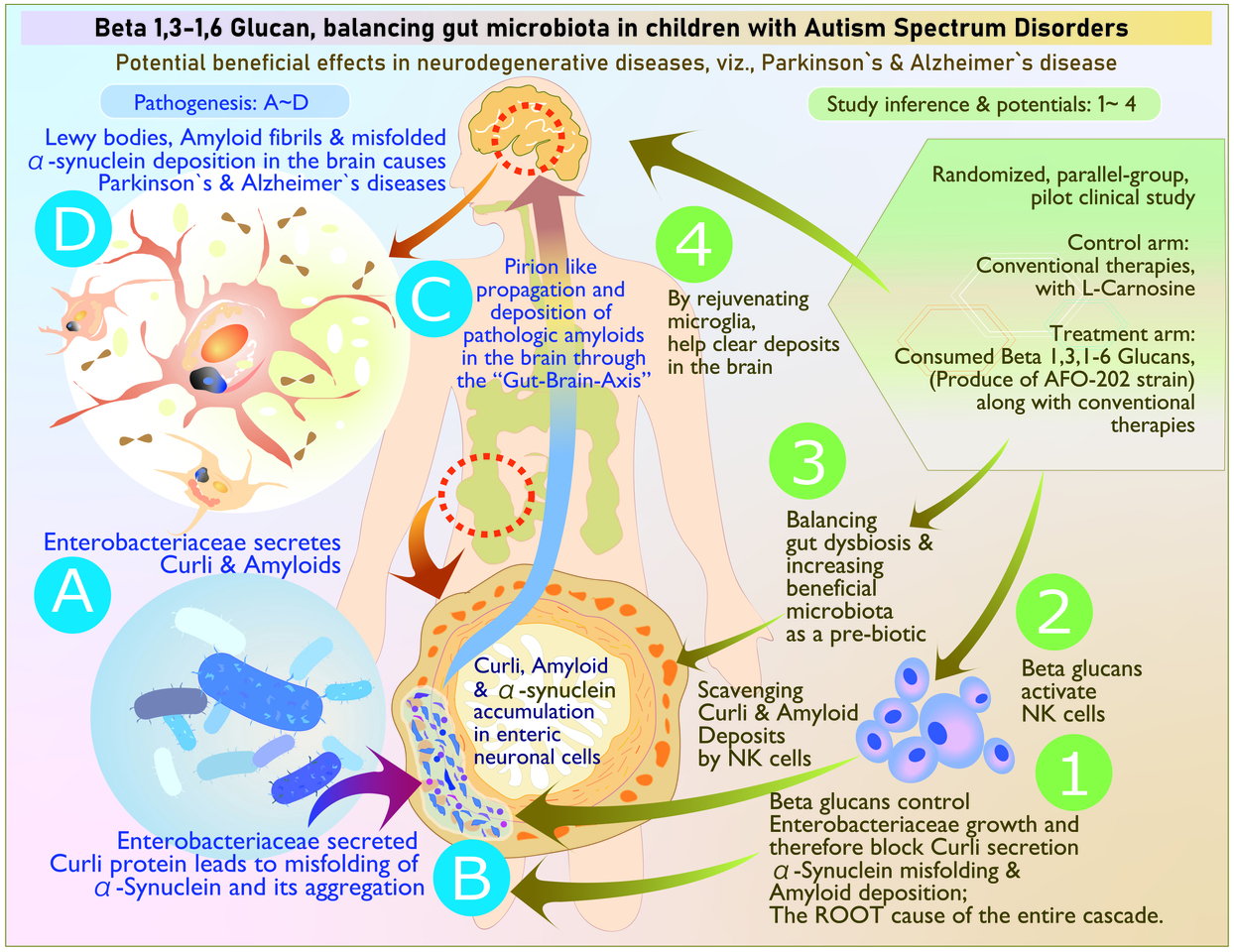 Gut-brain-axis harbingered the birth of a new tool, since the reporting of influence of gut microbiome (GM) on the brain. While correlation of GM to neuronal health is known, safe management strategies by leveraging GM holds potentials to tackle from neurodevelopmental to neurodegenerative diseases.