A symbiotic culture of bacteria and yeast is used to fabricate bacterial cellulose-based living materials that respond to external cues and adapt their structural and functional properties, with implications for sensing and catalytic applications.

In nature, animals and plants use various biomaterials to interact with the physical world. These "living materials" are often multifunctional and responsive. For example, an elephant’s nose can detect odors of food from miles away, tell the difference between two closely related plants, spray water, and grab things with an amazing range of motion. Similarly, plant leaves rely on the division of labor between specialized cells to achieve forms and functions crucial for the plant's survival in a constantly changing environment. It is challenging for artificial materials to reach such versatility and responsiveness. Naturally, we wonder: can we grow designer materials using living systems?

Unfortunately, animals and plants often take too long to grow and are hard to be used as living materials directly. Mushrooms? They grow extremely fast and have been used by several companies in their product design. However, these "mycelium" materials are difficult to control genetically and need to be killed to prevent undesirable growth. What about bacteria or yeasts? Luckily, after two decades of hard work, synthetic biologists can now precisely program these microbes, just like how we program machines with software codes. "Genetic circuits" written in the language of DNA can instruct the microbes to perform various tasks, let it be sensing, computing, or recording. In 2014, the Lu Lab and the Joshi Lab both used engineered E. coli to grow living biofilm materials that can pattern inorganic materials and display functional proteins. The concept was grand, but the materials were tiny -- you can only see them under a microscope. Growing autonomous living materials at scale has since become one of the major goals we want to achieve. Nevertheless, materials synthetic biology has grown into an exciting new field where cool living materials technologies rapidly emerge.

What microbes could generate a large amount of bulk material and yet are highly-engineerable? Kombucha, the popular fermented tea drink made by a symbiotic culture of bacteria and yeast (SCOBY), forms a thick pellicle (also called kombucha mother or mat) at the liquid surface. Such pellicle is composed of bacterial cellulose (BC) produced by acetic acid bacteria and has long been used by designers and artists in their bio-fabrication projects. They are very similar to the paper we use but superior in material properties. The amount of BC material you can make depends on the liquid surface's size, so some artists even grow it in a bathtub. This is a lot of material, much more (~1000 times) than E. coli biofilms!

The Ellis Lab first saw the SCOBY system's potential and has been developing genetic tools for BC-producing bacteria isolated from kombucha tea for many years. Thanks to the MIT - Imperial College London Seed Fund, the Lu & Ellis Labs joined forces to explore the possibility of creating a synthetic SCOBY (Syn-SCOBY) system using a lab strain of budding yeast (Saccharomyces cerevisiae) and a potent BC-producing bacterial strain (Komagataeibacter rhaeticus) isolated from kombucha tea. Why not just engineer the BC-producing bacteria? Well, developing tools for genetic manipulation of a non-model species is extremely labor-intensive and time-consuming. On the other hand, we have a very well-established system for engineering S. cerevisiae after decades of hard work of biologists. It would be more efficient to let K. rhaeticus focus on producing BC material and have S. cerevisiae perform the functionalization tasks such as sensing and enzyme-secretion. Such a division of labor is widespread in nature.

However, it is not so easy to make this two-species system work. After all, S. cerevisiae is not a commonly-found member in native kombucha SCOBY co-cultures. Charlie spent a lot of time screening for the perfect condition for maintaining a stable co-culture of the two species. In the end, he managed to find the golden ratio of mixing the two species and the sugar to use. Syn-SCOBY can now produce a thick layer of BC material within three to four days at room temperature. Moreover, you can make more of them simply by putting a small portion of the old culture into fresh tea and sugar.

Yet, we soon found that most of the yeast cells sink into the bottom because they have a physical density higher than the growth medium. This sedimentation is not ideal because we want the yeast cells to stay in the pellicle and perform tasks instructed by the genetic circuits we put into them. Fortunately, by tuning the medium's physical density, I found a chemical that can make the medium denser and force the yeast cells to float, just like how people can stay on the surface of the Dead Sea. Now, we can make Syn-SCOBY materials that can sense chemical and optical inputs and generate different outputs. We taught the yeast cells to sense light and report it using bioluminescence (like the fireflies!), making it a living Polaroid film. We also developed contaminant-sensing versions of Syn-SCOBY materials to detect toxins and produce enzymes to remove them. These materials could be grown easily on your kitchen table with just tea, sugar, and a small piece of Syn-SCOBY pellicle, as simple as how you brew your home-made kombucha tea. Moreover, they are still active after being dried up for long-term storage. Wouldn't it be great if anyone around the world could grow their own pollutant-sensitive smart filters and damage-reporting packaging materials?

Although we are still far away from growing our houses or smartphones using living organisms, Syn-SCOBY could be an exciting first step towards that bright future of living materials. Syn-SCOBY is compatible with most of the engineered S. cerevisiae yeast strains reported in the literature. Next time when you have your kombucha tea, think about what fun twists you could add to the booch! 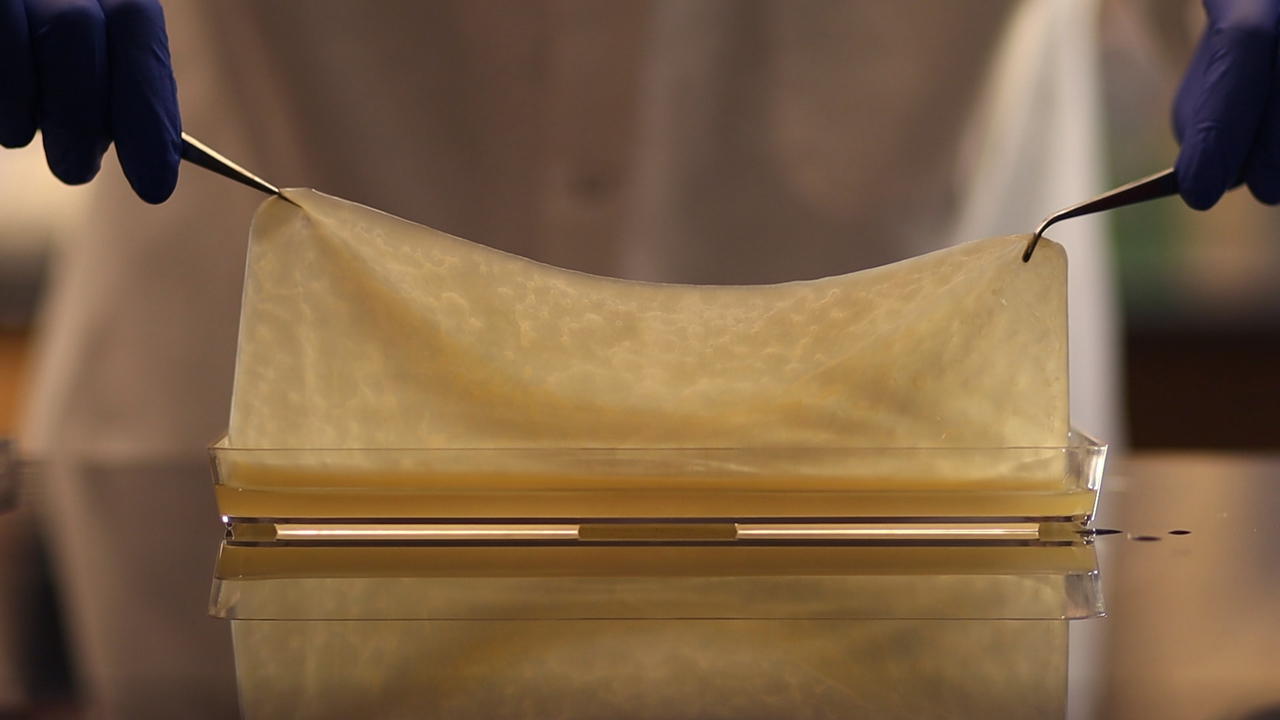