The pharmacokinetics of orally taken nicotine and intravenously injected cisplatin can be predicted via the physiological modelling of their first-pass metabolism using data from a robotic instrument that fluidically links the relevant human organ chips.

Drug development is increasingly hampered by high costs, low success rates of clinical trials, and high-profile examples of approved drugs that need to be recalled owing to safety concerns. Over the past few decades, the number of new drugs introduced into the market per billion dollars in development costs has declined from roughly ten to less than one (this decline in the productivity of the pharmaceutical pipeline has been referred to as ‘Eroom’s Law’ [1], the backwards-spelled form of Moore’s Law). Predictive and human-relevant functional assays employing microphysiological systems represent a promising strategy toward addressing these challenges. In particular, organs-on-chips (also known as tissue-chips), leveraging advances in microfabrication technology (microfluidics, material processing, instrumentation and sensing) and cell bioengineering, for the evaluation of drug efficacy and safety and for disease modelling, are envisioned to achieve the level of validation required for preclinical testing [2].

Early work on organ models focused on rat cells cultured in bioreactor chambers [3] to reflect key aspects of the pharmacokinetics of drugs and chemicals in humans, and the field of organs-on-chips has evolved significantly, through advances in both biological and engineering complexity since that time [4].  These ADME-Tox parameters (adsorption, distribution, metabolism and excretion, followed by a toxicity profile) are nevertheless typically tested in live animals in a time-consuming and costly process that is often poorly predictive of human responses. As an emerging alternative that overcomes species differences and other limitations of animal models, tissue chips typically comprise human primary cells cultured in a physiologically relevant microenvironment. For example, a lung-on-a-chip model showed how breathing motions enable the recapitulation of nanoparticle toxicity during respiration [5][6]. Configured as individual chips or as part of higher throughput industry-standard platforms [7][8], tissue chips are designed to capture mechanisms such as fluid-mediated shear and stretching of tissues, as well as other physiologically relevant mechanical, spatial and biochemical characteristics of the in vivo microenvironment.  Their development is progressing toward applicability in disease modelling [9] and toxicity testing, recently emerging as a high-throughput platform capable of evaluating efficacy of therapeutic candidates for respiratory viruses including influenza and coronaviruses [10].

Recent interest has been rekindled toward the development of integrated multi-organ systems, particularly by federal agencies in the United States keen to develop tools that can be used for rapid testing to inform responses to biological threats, such as bioterrorism or viral pandemics.  In 2012 the Defense Advanced Research Projects Agency (DARPA) and the NIH National Center for the Advancement of Translational Sciences (NCATS) launched the Microphysiological Systems (MPS) program. As is often the case with DARPA, the agency set a technologically extremely ambitious and disruptive goal: to produce a system comprising ten interconnected organ models that could operate for up to four weeks and evaluate drug safety and efficacy using human cells. Beyond the ongoing challenge of validating microengineered tissue systems comprising cultured human cells against model compounds for which responses are well established, the DARPA-NCATS program compelled investigators in a new direction.  This new challenge was to create new platforms and analytical frameworks to capture systemic aspects of human physiology, addressing challenges such as organ scaling, the use of common media, and the establishment of dynamic control over fluid levels across the multiple elements of a complex microphysiological system. In two contributions in Nature Biomedical Engineering, Donald Ingber and colleagues now report a robotic system that links up to 10 tissue models in a circuit capable of recapitulating physiologically-based pharmacokinetics [11], and the use of the system to accurately predict the pharmacokinetics of orally administered nicotine and intravenously administered cisplatin in humans [12].

The lung and gut chips in the Ingber and colleagues’ system comprise a multi-compartment configuration (Fig. 1a), first described in the earlier lung-on-a-chip report [6], that generates stretching motions mimicking the lungs’ breathing motions during respiratory cycles (in the lung chip) or gut peristalsis (in the gut chip). Critically, the tissue chips include an endothelialized barrier, which plays a central role in drug transport, and an arteriovenous reservoir that serves the role of the system’s ‘systemic circulation’. A common media flowing through the reservoir and the various vascular-like endothelial barriers within each organ tissue acts as a blood substitute. The robotic system (Fig. 1a, right) addresses the multi-organ system as described in the caption; this schematic illustrates the gut-liver-reservoir-kidney configuration used to evaluate PK of orally delivered nicotine.  The automated system, which is designed for frequent and convenient sampling of media at various locations in the circuit of linked chips, comprises a peristaltic pump driving an automated liquid handling system and mounted on a three-axis stage.  The instrument, known as the Interrogator, includes a robotically-controlled microscope for the real-time, high-resolution monitoring of the progression of the tissue models, phase-contrast imaging, and epifluorescence. In situ imaging of the tissue chips complements off-line biochemical and mass spectrometric measurements of analytes such as drug concentrations. Computational models complementing tracer studies confirmed that the system can be used to mimic various aspects of drug adsorption and distribution, and a computational scaling model for the actual and scaled interconnected array of organ models (Fig. 1b) provided pharmacokinetic and pharmacodynamic information that can be directly correlated with clinical observations.

Although extended operation with continuous crosstalk in multi-organ systems can be achieved via on-board pumping [13], Ingber and authors’ individual tissue chips are perfused with on-board flow control, with fluidic communication between the chips occurring via intermittent robotic transfer and the mixing of media. The authors’ use of intermittent fluidic coupling is a significant improvement over the use of capillary action [14], pneumatic pumps [15] or rocking plates [16], which are convenient but do not offer tunable and precise control of, for instance, flow profiles and shear forces in the vasculature. Still, the ability to tightly control flow rates over periods of several weeks while avoiding perturbations from air bubbles and fluid evaporation remains challenging. Although the intermittent fluidically coupled approach does not provide continuous systemic circulation and organ crosstalk (as occurs in vivo), it does provide robust control over inter-organ fluid-transfer rates, as well as automated flush cycles to clear channels and to maintain robust fluidic communication. Also, the authors’ system addresses several challenges common to all organs-on-chips and multi-organ chip systems, among them the integration of vascular-like barriers in each tissue model, circulation of a blood substitute throughout the circuit, and optical monitoring of tissue properties during extended operation . Importantly, they built the computational model to take into account the effects of the drug-absorption behaviour [17] of the commonly used silicone rubber material poly(dimethyl siloxane), which has become a mainstay for microfluidic devices for lab-on-a-chip applications because of ease of fabrication and convenience.

Ingber and colleagues’ computational modelling of drug levels in the arteriovenous reservoir is concordant with the measured drug levels in the tissue-chip modules determined by mass spectrometry. Moreover, nicotine levels after administration to the lumen of the gut model were followed through the drug’s metabolism in the liver and excretion through the kidney, with peak concentrations and clearance rates closely matching clinical observations. Similarly, cisplatin pharmacodynamics in the interlinked kidney, liver and bone-marrow chips recapitulated clinical manifestations, in particular nephrotoxicity, and revealed mechanistic aspects of cisplatin ADME-Tox. Although earlier work with interconnected microphysiological systems had reported pharmacokinetic analyses of drug metabolism [18], Ingber and colleagues’ work provides high fidelity, time-resolved experimental results that closely match the predictions of computational models across each organ in the system.  Even more significantly, the quantitative predictions of the multi-organ system closely match human clinical data in two key demonstrations.

Ingber and colleagues’ work contributes significantly to the development of what might ultimately be envisioned as a human-body-on-a-chip: reductionist representations of actual human physiology that capture the essential aspects of crosstalk between organs. In the near term, as more validated data emerges and multi-organ systems evolve toward greater compatibility with pharmaceutical laboratory instrumentation, body-on-a-chip systems will play an increasing role in preclinical drug development. In the longer term, systems incorporating human primary cells or human induced pluripotent stem cells will hopefully serve as powerful predictive models for precision medicine. 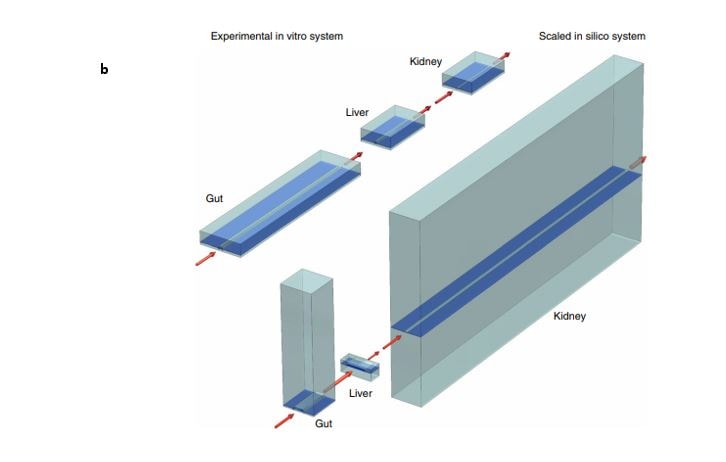 Fig. 1 | A fluidically coupled multi-organ chip system. a, Photographs (top, scale bars = 5 mm) and schematics (bottom) of the gut, liver, arteriovenous reservoir and kidney compartments of the linked organ system used to evaluate pharmacokinetic properties of orally-administered nicotine, including drug absorption, metabolism and excretion.    Drug is introduced into the apical chamber of the gut, and is absorbed through the intestinal wall comprising human primary gut epithelial cells cultured on a matrix-coated semi-permeable membrane.  Each of the organ models comprises a basal and vascular compartment separated by an endothelialized membrane, and common media passes through the vascular compartments of each model as well as the arteriovenous reservoir (red arrows.)  The label ‘I’ represents points in the circuit where the liquid handling robot moves fluid into or out of the organ models or the AV reservoir.  At right is an image of the robotic liquid handling system used to transfer fluid to modules within the multi-organ circuit.   b, Schematic representing the relative scales of the actual channel volumes and geometries of the gut, liver and kidney chips (top) and the scaled values based on in vitro in vivo translation using the model simulations (bottom.) 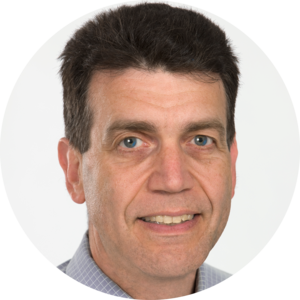 Podcast: Not lost in space Episode1