New antibiotics are urgently needed to combat the global health problem of antibiotic resistance. The human body, and particularly its proteins, has yet to be thoroughly explored as a source of drugs. Here, we explored the human body as a previously untapped source of potential antibiotics.
Cesar de la Fuente
Presidential Assistant Professor, University of Pennsylvania
Follow
Like Liked by Evelina Satkevic
0

The human proteome can be algorithmically mined to identify thousands of encrypted peptides, encoded in proteins with biological function unrelated to the immune system, that display antibacterial activity in vivo.

Specifically, our computational search identified throughout the body 43,000 peptide antibiotics encoded in proteins with unrelated biological functions. In this work, we demonstrate that the peptides kill bacteria by targeting their membrane, do not select for bacterial resistance, and possess anti-infective activity in vivo. Furthermore, the encrypted peptides display synergistic interactions with their biogeographical counterparts both in vitro and in a mouse model. We demonstrate that combinations of both two and three encrypted peptides derived from the same area within the body potentiate each other’s antibiotic properties to levels that are physiologically relevant.

Finally, we show that these encrypted molecules represent a new class of peptide agents that differ from conventional antimicrobial peptides because they: 1) possess a different amino acid frequency profile; and 2) target commensals. Specifically, we ranked peptides according to the scores predicted by our algorithm and selected 55 representative peptides from the cardiovascular, nervous, renal, hematopoietic, and digestive systems. At least 80% of the 55 tested encrypted molecules not only targeted pathogenic bacteria but also modulated gut and skin commensals, a surprising finding since natural antimicrobial peptides described to date are inactive against commensals.

Interestingly, the encrypted peptides tested did not readily select for bacterial resistance even after prolonged daily exposure to the peptides for a month. Conversely, bacteria did develop resistance to conventional antibiotics such as polymyxin B (Fig. 2).

Fig. 2. Resistance development studies of encrypted peptides. Evolution of resistance by A. baumannii to encrypted peptides derived from the CUB domain (red) or polymyxin B (gray) after 30 days of serial passaging in liquid nutrient broth. Peptides and antibiotics were used at sub-inhibitory concentrations. Cells were passaged every 48 h.

Next, we explored the ability of encrypted peptides to potentiate each other’s activity against pathogens. Experiments testing the synergistic interactions of peptides derived from the same area within the body revealed that some display remarkable synergy when combined in cocktails to target pathogens. For example, a pair of encrypted peptides from a plasma protein (SCUB1-MPF22 and SCUB3-MLP22) synergized to kill pathogens at low nanomolar concentrations, corresponding to 100 to 1,000-fold lower concentrations than when each molecule is used by itself (Fig 3).

Fig. 3. Synergy between encrypted peptides found within the same area of the human body. a, Experimental layout of the 96-well plates used for two-way synergy experiments using pairs of encrypted peptides. Briefly, two-fold dilutions ranging from 0 to 50 mmol L-1 of the peptide solutions were plated in 96-well plates and 106 bacterial cells in Nutrient Broth (NB) were added to each well to reach a final volume of 200 mL. b, The FIC value, which indicates the degree of synergy between two antimicrobial agents against a target microorganism was calculated based on the MICs of the peptides used alone and in combination. FIC index values £0.5 indicate synergy.

We also tested whether the encrypted peptides retained their potent antimicrobial activity in two different mouse models of preclinical relevance: a skin-abscess infection model and a thigh infection model. For these experiments, we selected two encrypted peptides from plasma proteins (SCUB1-SKE25 and SCUB3-MLP22) that presented high antimicrobial activity in vitro. First, we infected mice with 106-107 cells per mL of bacterial loads of the clinically relevant Gram-negative pathogens P. aeruginosa and A. baumannii (Fig. 4a-b). A single dose of each encrypted peptide was administered to the infected area, which markedly reduced the bacterial load, highlighting the anti-infective potential of these agents. No damage or deleterious effects exerted by the peptides were detected in the mice. Of note, the anti-infective activity displayed by the encrypted peptides was comparable to that of some of the most potent antimicrobial peptides described to date, such as polybia-CP and PaDBS1R6 1–5. Next, we assessed the efficacy of the same encrypted peptides (SCUB1-SKE25 and SCUB3-MLP22) in a murine thigh infection model (Fig. 4c-d)6. This model was selected because it is a well-established preclinical model that is widely used for assessing antibiotic translatability. The mice were infected intramuscularly with the same bacterial pathogens as in the previous model (i.e., P. aeruginosa and A. baumannii). A single dose of the encrypted peptide was delivered via intramuscular administration or intraperitoneally. Interestingly, three days post-treatment, the peptides reduced the bacterial load by 2-3 orders of magnitude when administered intraperitoneally, presenting higher antimicrobial activity than the conventional fluoroquinolone antibiotic levofloxacin. When administered intramuscularly at the opposite thigh (left thigh) away from the infection (right thigh), the peptides displayed bacteriostatic effects, thus not allowing the proliferation of the infection.

Fig. 4. Anti-infective activity and synergistic interactions of encrypted peptides in vivo. a, Schematic of the skin abscess mouse model used to assess the anti-infective activity of selected encrypted peptides from plasma proteins. b, SCUB1-SKE25 and SCUB3-MLP22 showed inhibitory activity, especially when used in combination, against both A. baumannii ATCC19606 and P. aeruginosa PAO1. c, Schematic of the neutropenic thigh infection mouse model in which encrypted peptides from plasma proteins were injected intraperitoneally to assess their anti-infective activity when administered systemically. d, Treatment with SCUB1-SKE25 and SCUB3-MLP22 either alone or in combination reduced infections caused by A. baumannii ATCC19606.

Our results point to the human proteome as a previously untapped source of novel antibiotics and reveal the multifunctional nature of numerous proteins that were traditionally thought to have only a single biological function. Because our approach computationally identifies antibiotics already optimized by nature and produced in our own bodies, we expect they will serve as excellent candidates for antibiotic development. The data presented also suggest connections between host defense and other systems in the body that were previously unrecognized as arms of host immunity, such as the nervous, endocrine, digestive, and cardiovascular systems. More broadly, we speculate that the existence of proteins with multiple functions, enabled by encrypted fragments, reflects an evolutionary mechanism that expanded protein capabilities while minimizing genomic expansion. This reduced the number of protein-coding genes that perform all the functionalities necessary to operate and defend the human body. Our algorithmic approach opens new avenues for much-needed antibiotic discovery in biological information, such as genomes and proteomes. 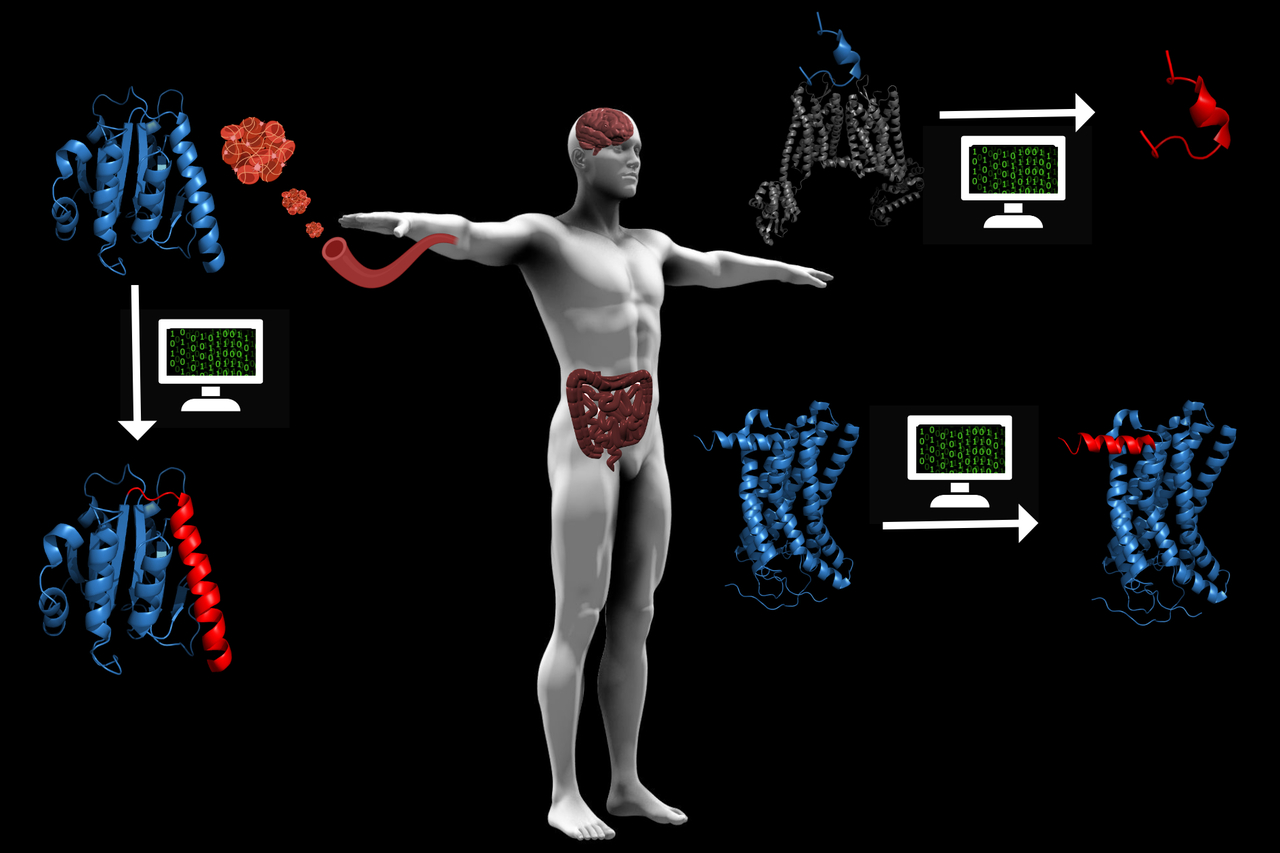 New antibiotics are urgently needed to combat the global health problem of antibiotic resistance. The human body, and particularly its proteins, has yet to be thoroughly explored as a source of drugs. Here, we explored the human body as a previously untapped source of potential antibiotics.