I still remembered that I went to Seattle for the 96th AAI annual meeting on May, 2009. In the cancer immunology session, one speaker from Europe presented her data on using tumor exosomes for vaccines, however speakers from the NCI reported tumor exosomes mediating immunosuppression. This contradictory findings from the meeting killed my enthusiasm to study on tumor exosomes. Around one month after I was back from the meeting, when I wrote something in my office, one of my colleagues Dr. Duyun Ye, a professor who always had some strange ideas, entered my office and showed me a gynecology research paper, in which the authors found that cell-released microparticles had a diagnostic value in patients’ blood. At that moment, I took for granted microparticles (MPs) equal to exosomes. However, after reading the paper carefully and searching literatures, I found that MPs and exosomes were essentially different. MPs are derived from plasma membrane but exosomes are stemmed from endosome membrane, and MPs have much larger size (100-1000 nm) than exosomes (30-50 nm, it is described as 30-100 nm currently). Furthermore, there were very limited studies about MPs at that time and most focused on blood cell-derived MPs in vascular diseases. No MP studies were found in the tumor field. I felt some excited in MPs, meaning that we could do the project on MPs. The literatures had indicated the release of MPs by apoptotic cells and how to simply use centrifugation method to isolate MPs. At that time, cancer immunotherapy was like a seed under the ground, and chemotherapy was the main means for cancer treatment. However, drug resistance made treatment failure. I naively conceived that the addition of drugs to cultured tumor cells resulted in tumor cell apoptosis and the subsequent release of drug-packaging tumor MPs, and loading drugs in the MPs were probably toxic to tumor cells but did not produce side effects of chemotherapeutic drugs. In the following days, we demonstrated that drug-packaging tumor MPs could effectively kill tumor cells in vitro, which was then validated in vivo soon. Considering the safety of tumor MPs as natural biomaterials and very small quantity of drug within MPs, we conducted the clinical trial of drug-packaging tumor MPs for malignant fluid treatment in patients at the end of 2011.

In 2014, we extended the clinical trials to obstructive extrahepatic cholangiocarcinoma (ECCA), a very malignant tumor type which is highly resistant to chemotherapy and radiotherapy. Methotrexate (MTX)-packaging MPs were injected to the bile duct via percutaneous transhepatic biliary drainage (PTBD). From the treated patients, the treatment efficacy could be easily observed from the changed stool color soon. However, the underly mechanism was dependent on neutrophils. The bile is very toxic. However, immune cells seem to be able to survive within. In this study, we found that MTX-MP perfusion elicited recruitment of neutrophils through UDPG and complement C5-dependent pathways. As a result, the recruited neutrophils rapidly degraded the extracellular stroma of ECCA, leading to tumor cells loosen and exposed. Thus, MTX-MPs gained access to and were taken up by ECCA cells, causing the cells to undergo pyroptosis through a gasdermin E-dependent pathway. This pyroptotic death combined with the recruitment of MTX-MP-educated macrophages further amplified neutrophil recruitment and conferred neutrophils an antitumor trait. This was why tumor MPs packaging a little chemotherapeutic drug could achieve an unexpected treatment efficacy against obstructive ECCA with few adverse side effects. 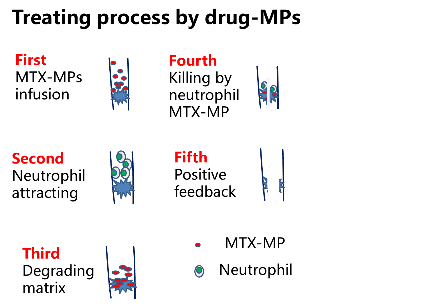