We recently published the Nanopore Electro-Osmotic trap (NEOtrap) in Nature Nanotechnology. In this behind-the-paper blogpost, I’d like to share my personal road to the NEOtrap (Figure 1), including what inspired me, which obstacles I faced, and what I learned along the way. With this, I aim to fight the 'iceberg effect' in academic publishing, i.e. that all the pre-work and unsuccessful attempts and other experienced difficulties remain invisible in the final publication.
Sonja Schmid
Assistant Professor, WUR
Follow
Like Be the first to like this
0

A trap, formed by a DNA-origami sphere docked onto a solid-state nanopore, allows the hydrodynamic trapping and label-free observation of single proteins, enabling nucleotide-dependent protein conformation to be discriminated on the timescale of submilliseconds to hours.

Everything started with... fluorescence!
Ever since I learned about proteins, I was fascinated by how their polymeric nature gives rise to the most complex and metabolically fine-tuned cellular functions. Enthusiastically, I dived into a PhD on single-molecule fluorescence and FRET (smFRET) in Thorsten Hugel’s group, to monitor protein dynamics in real-time – one single molecule at a time! Detecting with a self-built microscope how our ‘home-brewed’ proteins moved at the nanoscale was extremely rewarding as a PhD student2. However, it also became clear that our experiment was quite limited: photo-bleaching sets an abrupt end to smFRET recordings, and hence the observation time – more precisely the temporal bandwidth – is very narrow (2-3 orders of magnitude in time)3, which is quite limiting if the goal is to observe the broad-range dynamics of proteins. Back then, we pushed the limits on all levels, and by developing a semi-ensemble HMM approach (SMACKS4,5), we were able to squeeze maximum information out of the finite fluorescence time traces. I remember how pleasing it was to finally quantify trustable rate models, and hence be able to mathematically describe the observed molecular processes, and even simulate and predict the measured nanoscale behavior. We were certainly not the only ones working in this direction6–8, nevertheless, it was one of my personal highlights during my doctorate.

Moving on to electrical nanopore detection
It kept nagging at me, however, that we had not been able to solve the bandwidth problem at the experimental level with smFRET. After all, I really wanted to watch proteins at work in as much detail as possible, and the post-hoc in silico solution – as necessary as it still is – remains a workaround given the fundamental limitations of the smFRET experiment. Hence, towards the end of my PhD, I got interested in light scattering/ISCAT9 and electrical sensing schemes including smFET10,11 – imagine: single-molecule sensing without photo-bleaching! Eventually, I chose nanopores, since they seemed to be at a development level that was ready to take on the complexity of proteins. And later indeed, this turned out to be the case – much more than I could have imagined at that time. But first of all, it was clear that I would have to tackle a similar problem as in smFRET: while nanopore current detection is naturally not limited by photo-bleaching, the observation time of a single protein is still limited by its short residence time inside a solid-state nanopore (microseconds!)12,13.

From the start, I wanted to use a DNA-origami anchor to hold the protein in the nanopore (Figure 2), and thus extend the observation time considerably beyond the microsecond translocation times. As it turned out, several groups had been working on this approach long before me14–16, and my new colleagues in Cees Dekker’s lab were skeptical. Their doubts were largely of two kinds: (i) signal interpretation could be extremely challenging, and (ii) sufficient techniques were already available to reveal protein dynamics (incl. smFRET). At least the latter reservations didn’t last long once we discussed the limitations of those techniques and vice versa the fundamental advantages of label-free ion current detection using nanopores. Cees got enthusiastic and so we started, together with the DNA-origami wizards in Henrik Dietz’ lab, to design anchor structures that could position a protein of interest in the nanopore’s highest sensitivity region.

The valley of doubts
The following months in the lab were difficult. While the DNA-origami structures (hereafter: origami) readily docked onto the smaller nanopores (as expected due to their net charge), even the simplest biotin-avidin control experiments were indeed difficult to interpret – as my colleagues had predicted. This also revealed a clear limitation of our nanopore experiments: the ionic current was the only observable, providing finite information. In addition, the nanopore community had been focusing on DNA as an analyte for decades, and hence the literature on proteins and relevant forces acting on them was less developed. I started doubting everything: the conditions I used, the nanopores and their coating, the precise origami docking orientation and the structure itself, the protein, myself, etc. Many control experiments, and internal and external discussions followed. Most of these discussions were very insightful, constructive and inspiring, while certain others – surprisingly with established professors – were destructive to the point of ridiculing the entire endeavour. The latter experience – I pledged to myself – I will keep as an intense warning to never act like this – and certainly not towards more junior people out of a more senior position of power. Fortunately, I had the strong support of Cees Dekker and several others in his lab, which helped me to keep going despite the (complicating) effects of human nature.

The turning point came when – inspired by discussions on electro-osmosis and its likely underestimated relevance in protein experiments – I changed the way I ran the experiment: I added the protein to one side of the nanopore and DNA-origami rings to the other. Immediately, I started seeing very long and clear current blockades. At first, I didn’t quite believe what I saw – many things can happen in nanopore experiments – but the effect was clearly reproducible in different experiments, with different pores, etc. I saw my first electro-osmotically trapped proteins! The origami ring (red octagon in Figure 2) obstructed the nanopore, and caused electro-osmotic flow that allowed us to trap single proteins for extended times. In this way, we could sense unmodified proteins for seconds rather than microseconds – a million times longer!

The eureka moment
Christmas came, and back in Switzerland, it occurred to me: we need spheres! An origami sphere will seal the nanopore much better, and remove the global orientation heterogeneity and hence current variation. I felt a bit uneasy to ask Hendrik and Pierre for yet another structure, but luckily Cees was immediately convinced. During the next Delft-Munich video call, Pierre remembered the viral capsid mimic by Kopatz et al.17, which seemed to be perfectly suitable for our experiments – notably completely different experiments than what it was originally designed for by the authors. To me, this is a beautiful example of ‘standing on the shoulders of giants’. Shortly after, Pierre’s brand-new origami spheres arrived, and they did their job as expected, thereby further confirming the hypothesised electro-osmotic trapping. The eureka moment (see original screenshots in Figure 3) came at the right time, as a great birthday gift: the NEOtrap was born!

Altogether, there were many lessons learned for me during this project: first, how transferrable science skills are: from smFRET to nanopores and back; how transferrable also scientific results are: e.g. viral capsid mimics repurposed for the NEOtrap; how much it helps to collaborate and discuss your science openly from an early start and with an interdisciplinary team; how such an approach can reveal previously overlooked effects; how important curiosity and truly intrinsic motivation are to overcome the inevitable difficult and doubtful periods; and certainly, how precious a strong and supportive home base is, which I hope to create now myself in the NanoDynamics Lab. In any case, I am most grateful for this experience, a scientific journey I won’t forget. Now, I am curious to discover where the NEOtrap and other single-molecule experiments will lead us in the future18. And I hope I could help a little bit to fight the 'iceberg effect' in academic publishing by sharing my personal behind-the-scenes perspective. 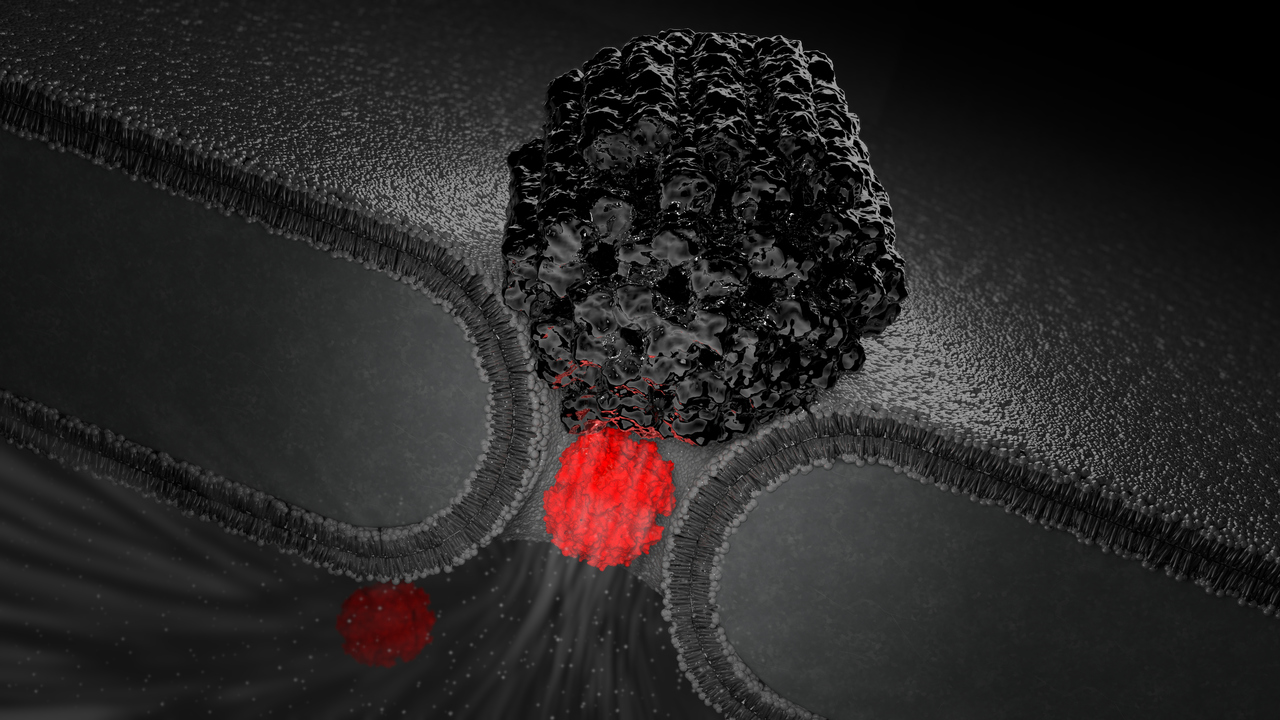 We recently published the Nanopore Electro-Osmotic trap (NEOtrap) in Nature Nanotechnology. In this behind-the-paper blogpost, I’d like to share my personal road to the NEOtrap (Figure 1), including what inspired me, which obstacles I faced, and what I learned along the way. With this, I aim to fight the 'iceberg effect' in academic publishing, i.e. that all the pre-work and unsuccessful attempts and other experienced difficulties remain invisible in the final publication.