Nucleating in a Molecular Storm - Oriented Attachment of Protein Nanocrystals

Scientists from the VIB, the Life Sciences Research Institute in Flanders, Belgium (VIB-VUB Brussels), Radboud University Medical Center, Institut de Biologie Structurale (CEA-CNRS-UGA, France) and Institut des Sciences de la Terre (UGA-CNRS-USMB-IRD-Univ Gustave Eiffel, France) have shown that protein nanocrystals undergo oriented attachment (OA) in a region of the phase diagram that has remained largely unexplored. Using cryo-electron microscopy, they followed the nucleation pathway of glucose isomerase in the limit of high supersaturation. Their results demonstrate that protein nuclei can merge lattices by means of oriented alignment even before inter-crystal contact is made, satisfying non-trivial symmetry rules in the process. With most of the proteins already depleted from the solution, these mutually docked lattices become the building blocks in a game of 3D Tetris trying to form a macroscopic crystal. As every iteration of OA generates more and more complex geometries, a point is reached where these nanocrystals can no longer dock perfectly with each other, ushering in the formation of a protein mesocrystal driven by imperfect oriented attachment that would probably result in the mosaicity commonly found in protein macrocrystals. 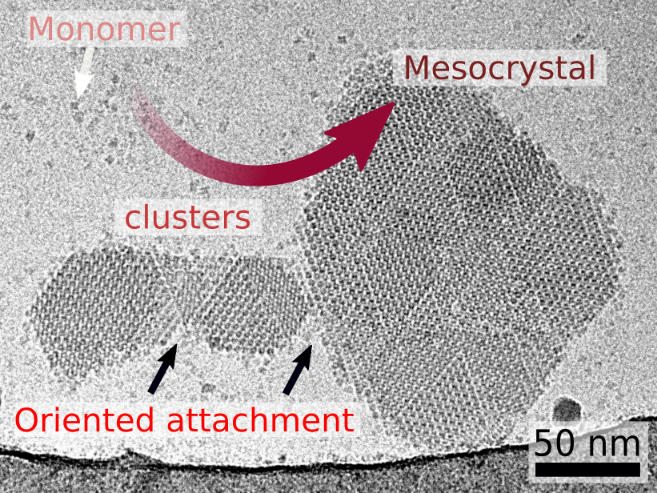 State-of-the-art in a nutshell - Protein crystallization is a remarkable feat of nature. It requires the ability of highly complex and dynamic macromolecules to find and dock with each other in such a way that a repetitive pattern emerges. This search for a stable pattern, or lattice, is the nucleation stage of crystallization and is by far the most time-consuming step for many systems. Finding that nucleus is by no means trivial because protein crystallization tends to take place under complex conditions, be it in the densely populated cellular milieu or in the multicomponent reaction mixtures in the lab. The formation of a crystalline lattice requires a subtle balance between inter-particle attraction such that the molecules can be persuaded to shed their hydration layers to allow for inter-particle docking, but at the same time keeping the strength of that attraction in check to avoid unspecific aggregation. For decades, protein crystallization was obscured by our scientific blind spot because it lay well beyond the boundaries of what was experimentally measurable leaving most questions open to speculation. This started to change over the course of the last decade because of technical advancements that facilitated experiments to probe the crystallization process at the molecular level. These enquiries have taught us that there is no single route towards a nucleus of a protein crystal. Some proteins follow a straight path by forming crystalline embryos that grow out to become macroscopic crystals by molecular addition events. Other proteins, however, follow a more winding path in which they first form a loose, hydrated network from which water is gradually expelled. During this stage of compaction, the molecules start to pack more efficiently, leading to local symmetry and ultimately the emergence of a crystal lattice.

Nucleating in a molecular storm - But these pathways are predicated on the fact that the emerging nucleus is fully isolated from any other nucleation events that are taking place in the vicinity. There are regions in phase space where this quarantined state of the nucleus can no longer be guaranteed. For instance, crystallization that occurs far from equilibrium goes hand in hand with fast and ubiquitous nucleation, leading to scenarios where newly formed nuclei collide and interact with each other. Wai Li Ling (IBS Grenoble) recounts that “we specifically targeted such a regime of crystallization precisely because it is so challenging to work in. You must see that at these conditions, thousands of nuclei can form in a tiny droplet within the manner of minutes, an impossible scenario for most techniques but still manageable for our cryoEM because we can kinetically freeze the system at different states of the reaction.”.

Alexander Van Driessche (ISTerre Grenoble) adds that “it was impossible to predict what we would find, but we assumed it would strongly deviate from known nucleation pathways. And indeed, we witnessed the formation of glucose isomerase nanocrystals, the smallest of which were composed of only dozens of molecules. The unexpected part is that these crystals co-align their lattices when the approach each other. In an anthropomorphic way you could say that they can sense the relative orientation of their neighbors.”

This docking process is well documented for other types of crystallizing matter, for instance for inorganic salts. It requires subtle translational and rotational movements to find proper registry and is referred to as oriented attachment. “But that process has its limitations.” says Mike Sleutel (VIB-VUB Brussels). “In our case, it is driven by the osmotic pressure that we impose by the addition of a polymer, poly-ethylene glycol. Crystal docking maximizes the volume that is available to the polymer and therefore limits entropic penalties that you pay to constrain it. But as more docking events occur, you start to form more complex shapes that deviate from the typical rhomboids that we expect for this space group”. That complexity comes at a cost, because the puzzle pieces can no longer fit optimally at some point. It is at this stage that grain boundaries and angular mismatches start to form in between the domains. Such crystalline agglomerates are mesocrystals and had not been directly observed before for proteins. 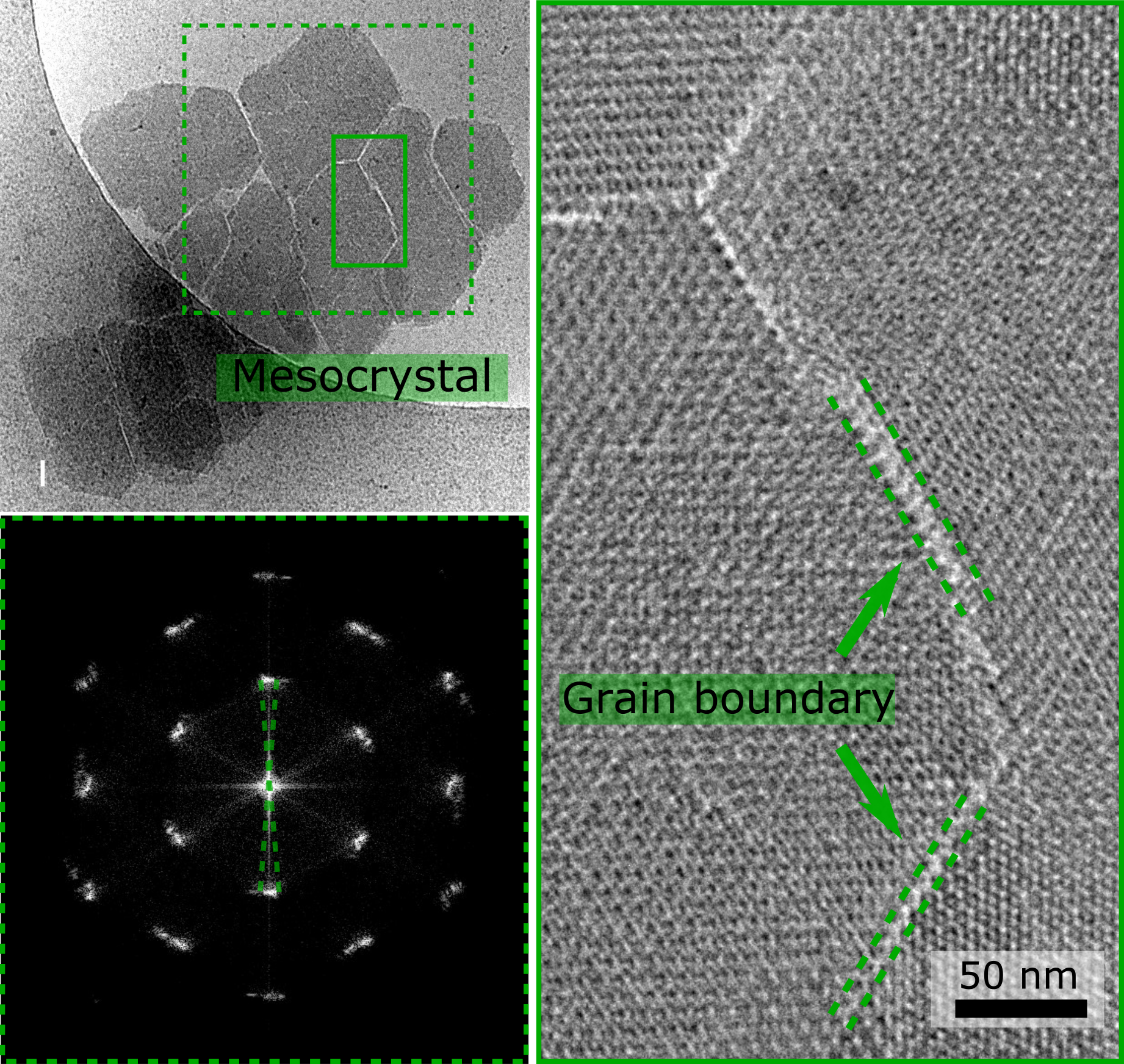 Oriented attachment can be used to obtain unusual crystal morphologies that are otherwise impossible. For instance, it can be used to create crystals with very high aspect ratios to produce nanoneedles. Nico Sommerdijk (Radboudumc Nijmegen) adds that “it is interesting to contemplate how we can start using oriented attachment to our advantage in protein crystallization, for example in the design of new biomaterials. It was not a priori clear that protein mesocrystals can be formed because you need to induce interaction potentials that trigger nanoparticle formation, while steering clear of amorphous aggregation.”

Link to the Nature Communications paper:

From monomers, to nanorods, to crystals:

Ionic contrast across a lipid membrane for Debye length extension: towards an ultimate bioelectronic transducer 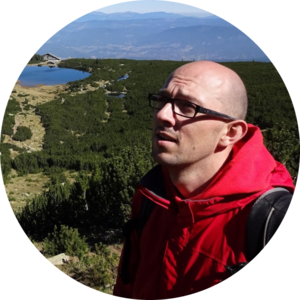