Post-mortem histopathological data can be used to classify neuropathologies into six transdiagnostic clusters, and patient membership to these clusters can be predicted from cognitive scores, genotype and protein levels in cerebrospinal fluid.

Neurodegenerative diseases are a leading cause of death among older Americans and a significant burden on the health care system1. Brain autopsy is the current gold standard for diagnosing different neurodegenerative diseases based on the presence of specific misfolded proteins (Table 1). However, multiple disease-defining proteins are often found on autopsy (referred to as “copathology”), which complicates the aim of treating a specific disease process in individual patients.

We were already familiar with pronounced phenotypic heterogeneity in psychiatry, where 50% of patients meet criteria for multiple Diagnostic Statistical Manual (DSM) diagnoses and disease mechanisms are unknown2,3. Unsupervised approaches reveal reproducible patterns of co-occurring symptoms4 and an overarching “general psychiatric unwellness” factor (p-factor)2 that may explain psychopathology more parsimoniously than the DSM. Thus, we wondered whether existing neuropathologic diagnoses truly capture demarcations in disease experienced by different patient groups, or whether alternative diagnostic boundaries would more succinctly describe the causes of neurodegeneration and identify groups susceptible to intervention (Figure 1).

As an initial step towards answering this question, we assessed 895 autopsy cases from patients with neurodegenerative disease, each with regional measurements of tau, α-synuclein, amyloid-β, and TDP-43 aggregation. We applied a data-driven clustering algorithm to identify patterns of copathology between these proteins, revealing 6 patient groups that reflected (1) primary tauopathies, (2) combined tau and amyloid-β pathology characteristic of Alzheimer’s disease, (3) TDP-43 proteinopathies, (4) synucleinopathies, (5) tau-α-synuclein copathology, and (6) minimal cerebral pathology (Figure 2). The composition of the first 4 patient groups or clusters provides a data-driven confirmation of Table 1, but the 5th cluster’s composition suggests that tau-α-synuclein copathology may be a unique entity. Cluster 5 had strong corticolimbic α-synuclein and amyloid-β pathology, strong limbic tauopathy, and moderate cortical tauopathy. Patients in Cluster 5 had longer lifespans than patients with pure synucleinopathy (Cluster 4), suggesting that this copathology pattern might preferentially occur in more indolent synucleinopathies or protect against neuron loss.

After characterizing the pathological findings associated with each data-driven patient group or cluster, we trained statistical models to use pathology measures to predict scores on clinical cognitive assessments8 obtained from these patients in vivo. We found that our data-driven groupings were better predictors of cognitive scores than the stage of Alzheimer’s or Parkinson’s disease, and were almost as informative as the entire set of pathology scores used traditionally in the clinic, suggesting that copathology is critically relevant for understanding patient experiences and outcomes.

Finally, we forecasted each patient’s data-driven group at autopsy from in vivo CSF protein levels, cognitive scores, and genotypes at the APOE and MAPT loci, in an attempt to automate the diagnosis of neurodegenerative disease. This analysis revealed that the tauopathy cluster (Cluster 1) and the TDP-43 cluster (Cluster 3) could be more easily distinguished from other clusters than their constituent diseases, suggesting that broader disease categories can be more reliably identified than highly specific syndromes using gold standard clinical biomarkers.

Our study provides two useful contributions to neurodegenerative disease research and clinical data science. First, our prediction of future pathology from cognitive phenotypes and CSF protein levels may facilitate more accurate diagnoses and the development of therapies that target specific proteins in patients living with neurodegenerative disease. Second, we demonstrated a general framework for using existing tools to gain new insights about heterogeneous diseases with unmeasurable or unknown pathophysiology (Figure 1). Future studies could use our approach with expanded, quantitative clinical, neuropathological, and genomic datasets, or in an entirely different field of medicine, such as cardiovascular disease, epilepsy, or cancer. 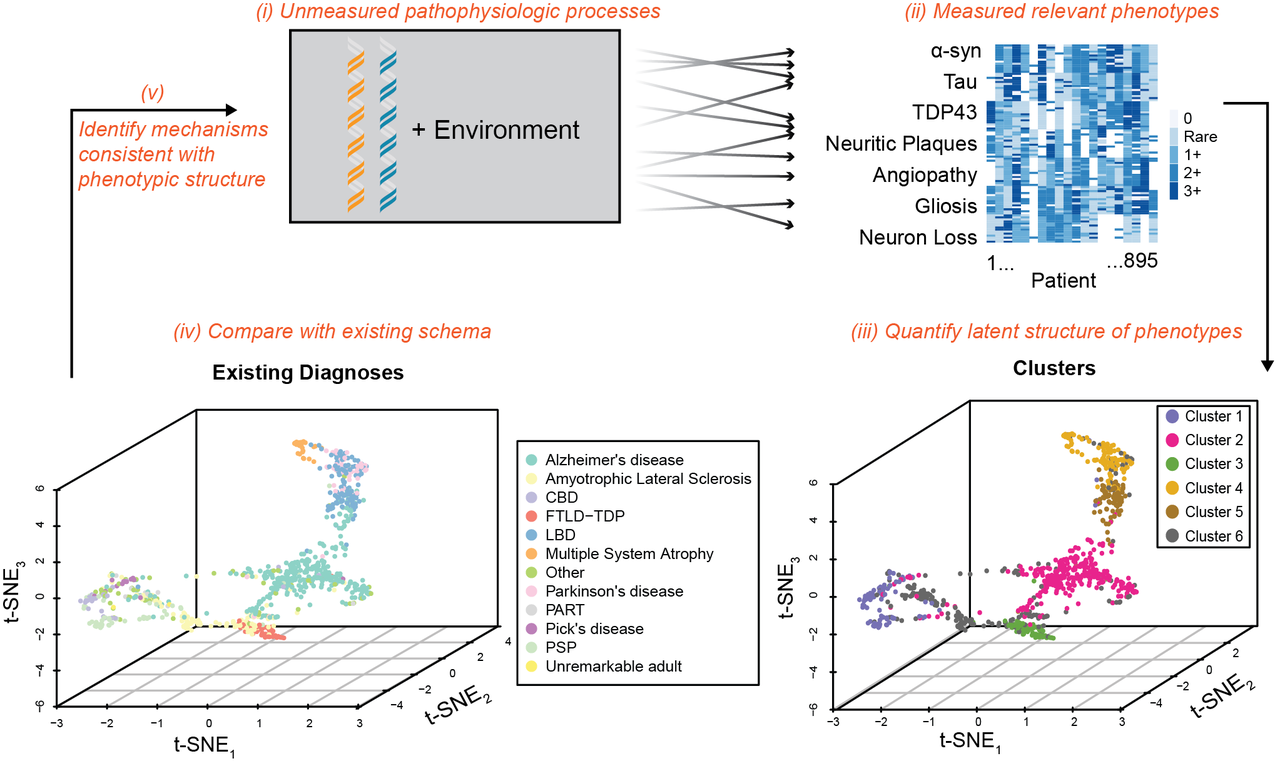