Prime editing is a versatile genome-editing technique, but designing efficient prime edit guide RNAs (pegRNAs) can be elusive. We present a straightforward reporter system to streamline pegRNA optimization and enrich for edited cells.
Imre Schene and Indi Joore
2 contributors
Like Liked by Evelina Satkevic and 1 other

While prime editing is a promising technique, some genomic sites remain difficult to edit. Here the authors present fluoPEER, fluorescent prime editing and enrichment reporter, to rank the efficiency of pegRNAs and prime editor variants.

Since the discovery of CRISPR-Cas9, scientists have dreamt of treating genetic diseases using precise gene editing. However, traditional Cas9-mediated gene editing, such as homology-directed repair, proved too crude a tool. Base editing and prime editing refine the use of Cas9 to a degree that may enable therapeutic application.

Our group has a strong translational focus, with our group leader working as a metabolic pediatrician and scientist. In the clinic, she finds that next-generation sequencing now generally enables establishment of the precise genetic cause of metabolic diseases but that current treatments are frustratingly ineffective in preventing deterioration. This underlines the importance of developing new therapies for this group of patients, which we aim to do by combining patient-derived disease models with cutting-edge technologies.

Around two years ago, we started using base editing and prime editing in patient-derived organoid cells to correct disease phenotypes in a dish. Although prime editing proved promising for the correction of some genetic targets, other targets remained difficult to edit. During this first project, very little was known about the technique and the design of prime edit guide RNAs (pegRNAs) in particular. We developed most of our early pegRNAs based on the proof-of-concept study by Anzalone and colleagues, which demonstrated the need for pegRNA optimization but provided few clues on how to go about this.

From the high throughput evaluation of pegRNA designs performed by Kim et al., we gained more insight into the parameters determining pegRNAs efficiency. Specifically, they advised to use pegRNA spacers with efficient binding, primer binding sites (PBSs) of ~13 nucleotides with high GC-content, and reverse transcriptase templates (RTTs) of ~12 nucleotides. Although this has proven useful, we quickly discovered that their deep learning algorithm was incapable of faithfully predicting pegRNA efficiency for many new targets. At the same time, we and other researchers started to notice that the original prime editor protein (PE2), relying on ‘NGG’ protospacer-adjacent motifs, can only effectively correct a minority of all known pathogenic mutations. For instance, for the common cystic fibrosis CFTRG542X mutation, the closest ‘NGG’ PAM is 33 nucleotides removed, forcing infeasible pegRNA RTT lengths. Therefore, we and others started cloning prime editors with flexible PAM-recognition domains. The advent of these flexible prime editor variants further restricted the usefulness of deep learning for the design of pegRNAs.

We felt that a tool was needed for quick and easy screening of pegRNA design for any prime editor variant in any genetic context, supporting prime editing research across the board. Our fluorescent prime editing and enrichment reporter (fluoPEER) consists of a straightforward design, utilizing two fluorescent cassettes (GFP as transfection-proxy and mCherry as editing-proxy) and the genomic target region (Figure 1). In our lab, we used fluoPEER to screen optimal prime editing conditions, combining various pegRNA designs with prime editor variants. During the first stages of the project, we wondered whether plasmid-edited cells also had a higher chance of editing on the genome. We were quite shocked when we discovered the enrichment enabled by fluoPEER. This allowed us to efficiently generate mutant organoids and cell lines. Not long after we discovered this for fluoPEER, Li et al. published their diphtheria toxin enrichment strategy, strengthening our findings.

Of course, our intentions shifted towards the ‘how’ behind fluoPEER-enrichment. We wondered why certain cells are more prone to gene editing than others, especially considering that we first tested enrichment in HEK293T cells, which we presumed to be a relatively homogeneous cell population. As such, we hypothesized that these differences were caused by the cell cycle, which we indeed showed to affect prime editing efficiency. The cell cycle influences expression of genes involved in DNA repair, with higher activity of homologous recombination during the S phase. We and others confirmed that enriching populations for cells in the S phase can increase prime editing efficiency. Interestingly, while we were revising this work, the groups of Liu and Loizou revealed that activity of the DNA mismatch repair pathway can counteract prime editing. This shows that various DNA repair pathways have distinct effects on prime editing outcomes.

Prime editing is a fast-evolving, versatile technique that still requires extensive optimization in order to be used for patient care. FluoPEER may contribute to this translational journey by enabling streamlined pegRNA design and facilitating in vitro generation and repair of disease models. We are excited about future developments in this field and look forward to bringing this technique closer to the clinic! 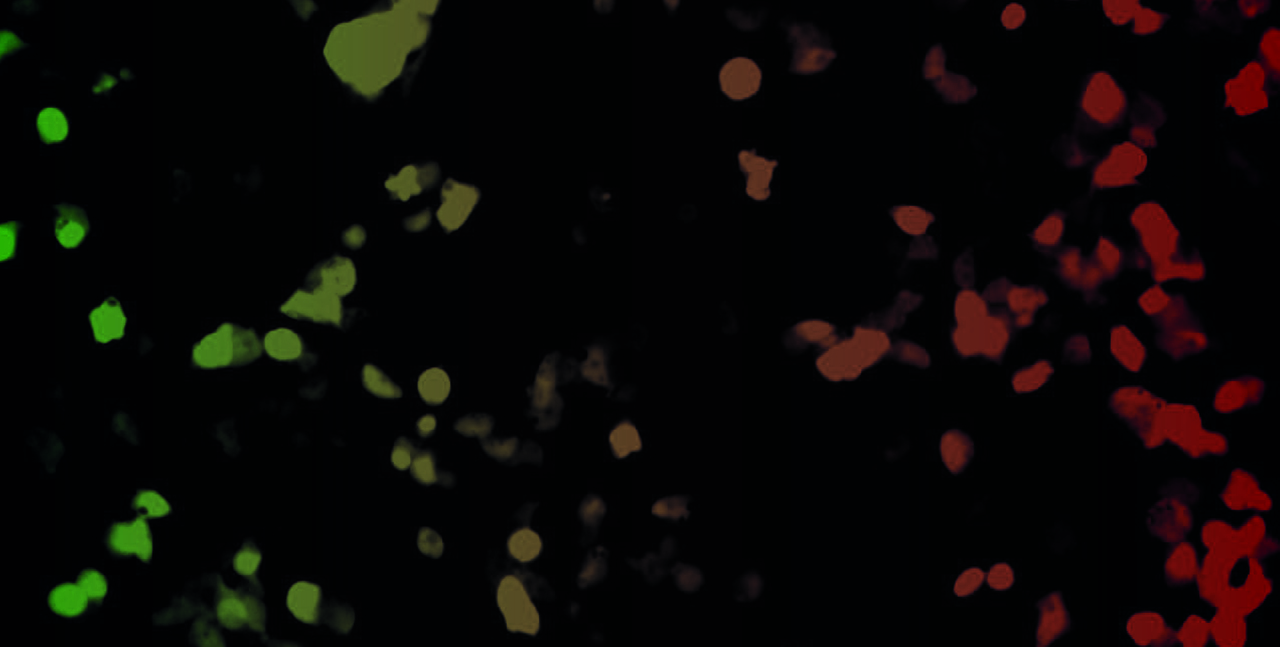 Prime editing is a versatile genome-editing technique, but designing efficient prime edit guide RNAs (pegRNAs) can be elusive. We present a straightforward reporter system to streamline pegRNA optimization and enrich for edited cells.