Physical resolution might be meaningless if in the mathmetical space

Behind the paper post about our recent work on "Sparse deconvolution improves the resolution of live-cell super-resolution fluorescence microscopy".

When I started my Ph.D. in 2017, I began to dig into the field of super-resolution microscopy which was already Nobel prize rewarded and well-established at that time. The start point of super-resolution microscopy, I thought, is the higher-NA/shorter-wavelength configurations and the confocal concept, which are pure physical methods to improve the resolution. Restricted by the real physical conditions, the corresponding resolution improvements were very limited. As time goes on, more and more fluorescence markers are being developed, the microscopists are beginning to be dissatisfied with such pure physical methods, and move on to the indirect chemical strategies, i.e., the fluorescence superresolution microscopies (SMLM/STED). However, all these methods need to sacrifice something in exchange for the resolution improvement.

On the other hand, I found the mathematical algorithms, in particular the deconvolution method  is conceptually a quite straightforward and generalized approach to improve the resolution: 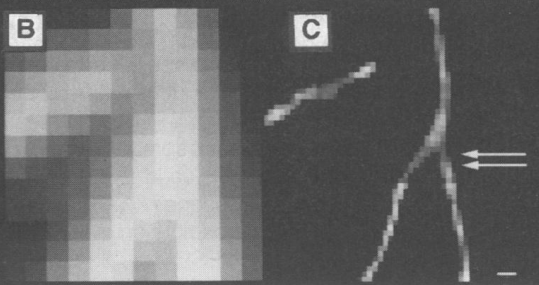 Actually, broadly speaking, most computational super-resolution methods contain the core concept of deconvolution, which is to decode real signals from measured signals. Unfortunately, although deconvolution has been routinely used for image enhancement, and even commonly involved as an auxiliary function in most commercial microscope systems, so far the idea that deconvolution can directly achieve super-resolution does not seem to be widely accepted by the community.

If considering that most conventional deconvolution methods have very limited performance and strict requirements on signal-to-noise ratio and sampling rate, we found that this prejudice will be quite predictable and acceptable. If there are deconvolution methods consistently unsensitive to noise and highly efficient at decoding high-frequency information, we thought this may broke the bias of community.

This post hopes to share some fundamental discussions on deconvolution methods and some bottom-up insights of how we designed the sparse deconvolution. For me, the development roadmap of optical super-resolution microscopy can be written as:

Interestingly, without noise and with infinite sampling rate, even if the image is blurred by a PSF, we can still recover the real signal precisely. To clarify this point, I will next provide a little background of the inverse problem and deconvolution. For me, the deconvolution is actually a classical machine learning method, rather than an optical method, that estimate the hidden parameter (real signal) from the measured parameter (camera image).

Ax = y. It is an inverse problem if without noise.

Sampling{Ax + n} = y. It is an ill-posed inverse problem if with noise and sampling.

What we’re doing is trying to estimate the maximum possible x from the observed data y. If the A is a gaussian-function/point-source, and under noise-free condition, the x and y can be one–to–one correspondence.

In the field of machine learning or convex optimization, before establishing a model, we always start by asking ourselves, is this problem convex, or is there existing a global optimum. If there is no noise, then the x and y can be one–to–one correspondence. No matter what method we use, we just need to find x that Ax is absolutely equal to y.

There are many solutions, including the Bayesian-based Richardson-Lucy (RL) deconvolution, which will be discussed below. If the computing power is sufficient, even particle swarm (PSO) or genetic algorithm (GA) are effective choices. We can define the x as the parameters to be optimized by GA/PSO, and the optimization will stop when find x for Ax – y = 0.

In Supplementary Fig. 1, without noise and down-sampling, even using the band-limited PSF, RL can recover the missing information.

"In this sense, physical resolution might be meaningless if in the mathmetical space." 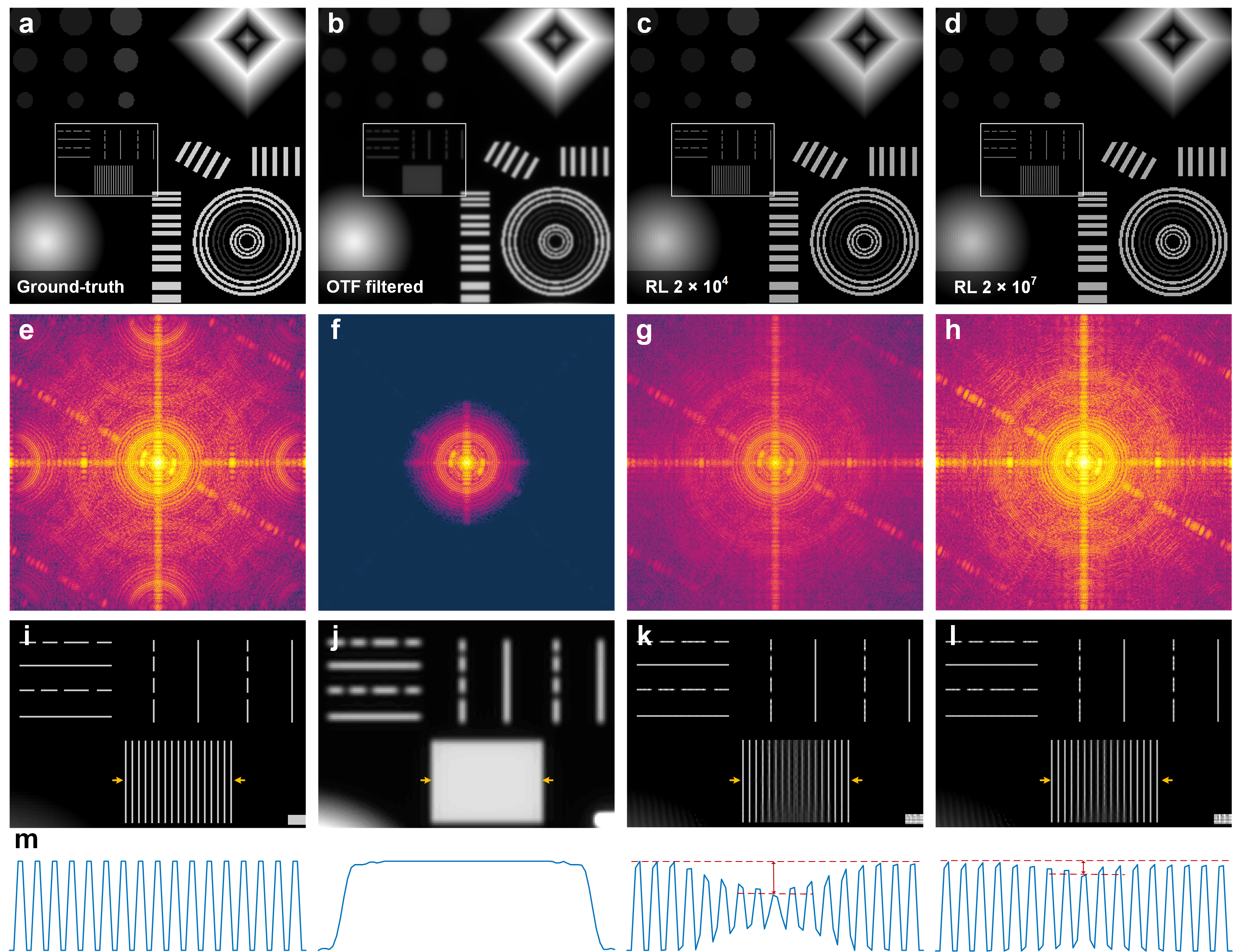 For example: Considering the image contained background noise, if corresponding to maximum likelihood estimation (MLE), RL only considers Poisson noise, while Poisson noise does not contain background. So, the RL model seems to be deviating from the range of application (the image with background). It would be a good correction/prior-knowledge to add b to the model based on this definition.

Of course, it is extremely complex in real world, including Gaussian-Poisson noise, background noise, defocus signal, cytosol signal, and limited sampling (pixel-size). The regularization function is necessary for obtaining a unique solution in under-constrained systems.

It is always a good way to add the corresponding prior knowledge to power the estimation. This word might be not restricting to deconvolution but all algorithms.

Taken an example of single molecular localization microscopy (SMLM), which can also be treated as a deconvolution method, it utilizes the strongest prior knowledge on the real fluorescent signal x, i.e., the isolate puncta, to achieve super-resolution in 10~20 times. However, the usage of such prior knowledge needs the specific designed experiment, and can not be applied to the conventional microscopes.

What we intend to do is to find the relatively weak but general (for fluorescence imaging) prior-knowledge in the manuscript:

Thus, sparsity recovers the high frequency information (towards to the real signal), and in the meantime the image is also constrained by the Hessian matrix continuity. As these priors on two different levels recovering the signal cooperatively, the proposed sparse deconvolution is more robust and effective. Here we provide an abstract working process of our sparse deconvolution: Here we provide two examples to illustrate the different effects from different prior knowledge:

We have tested our sparse deconvolution on various miscoscopes and diverse samples: 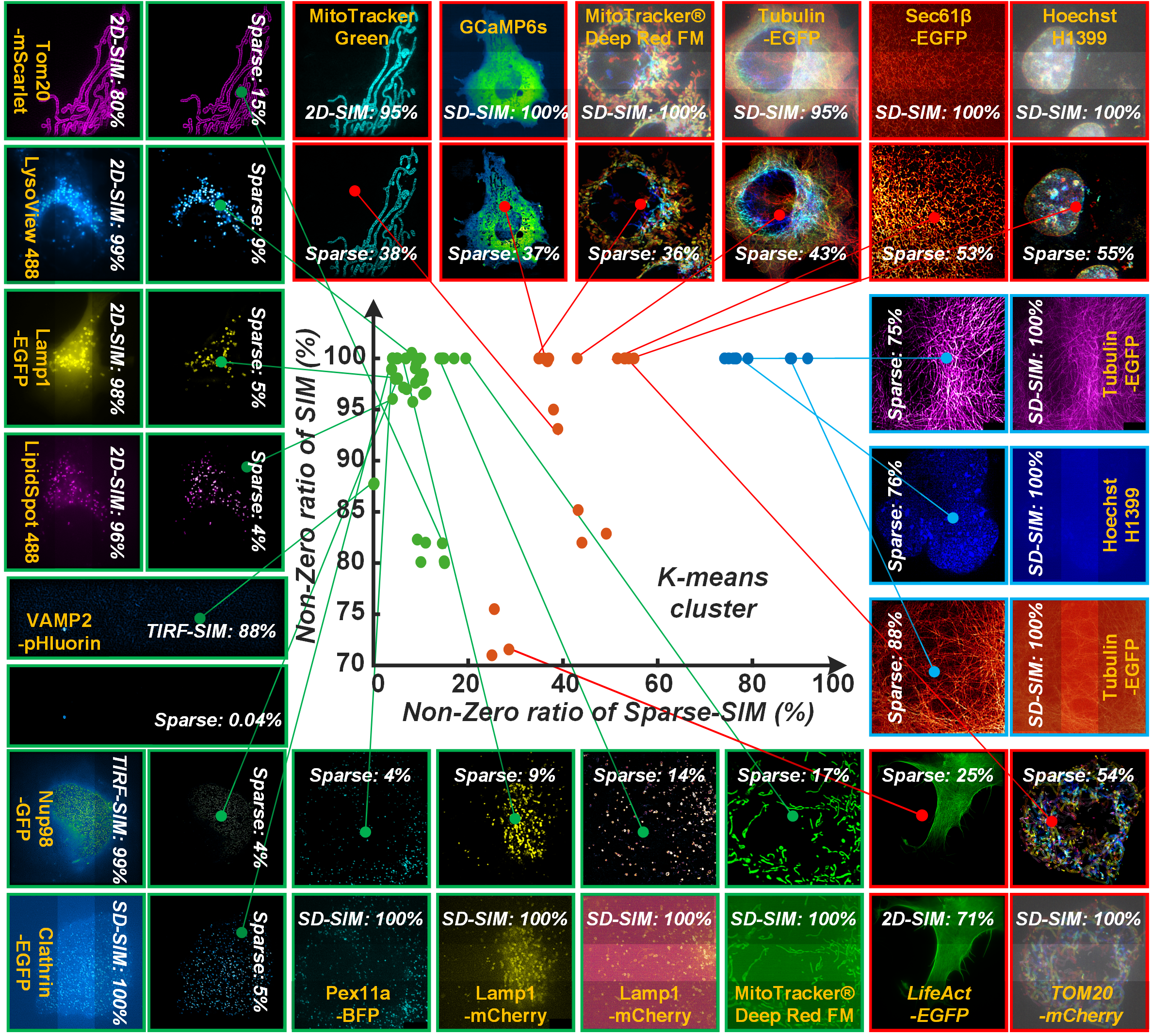 Admittedly, the reasonable usage of prior knowledge is a prerequisite for the method to really apply to the biological applications. Unreasonable parameters do lead to less-than-ideal results. Simulations under different SNR, and the corresponding reconstruction results. (a) We created synthetic ring-shaped and punctated structures with an 80 nm diameter as ground-truth (left). It was convolved with PSF with FWHM of either 110 nm (middle) or 45 nm (right). (b) These images were subsequently subsampled 16 times (pixel sizes of 16 nm), and corrupted with Poisson noise and 2%, 5%, 10%, 20%, 50%, 80%, and 100% Gaussian noise. (c) The images with different Gaussian noise amplitudes are processed with different weights of priors. (d) The 7 × 7 table of the reconstruction results. The column, and row represent the noise amplitude and weights of priors for reconstruction, respectively.

Although it still has its disadvantages (a little bit more tunable parameters), we believe that sparse deconvolution is currently the best and the most effective solution/method. Under a broader perspective, this is probably the TOP method of generative models in the field of unsupervised learning (including deep or non-deep methods) for fluorescence image restoration.

All technologies have its boundaries, and using proof by contradiction to evaluate them might be not appropriate. The success is success, the unsuccessful example will only illustrate the boundary of the technology. Just as all microscopes are suitable for imaging only a certain range of samples.

The unrestricted using and testing can lead to the strange results. But we are eager for the community to test it extensively, and exploring the boundaries of this method, which will also give us or other developers the opportunity to push the algorithm limit further.

HERE you can find the source codes of sparse deconvolution to reproduce our results.