Positron emission tomography is widely used to image tumors. But is it sensitive enough to image and track single cells?
Guillem Pratx
Assistant Professor, Stanford University
Follow
Like Liked by Guillem Pratx and 1 other

The travelling kinetics of single cells loaded with mesoporous silica nanoparticles concentrating the 68Ga radioisotope can be tracked in real time in vivo from the patterns of coincident gamma rays detected by positron emission tomography.

The human body contains over 35 trillion cells, far more than the number of stars in our galaxy. Yet, while astronomers have powerful telescope to visualize and identify celestial objects, it remains challenging to precisely track down individual cells in their natural environment.

One of the amazing properties of cells is that they are capable of complex migration. Take immune cells, for instance, which can mobilize in response to inflammatory cues and travel to areas of infection to fight pathogens and promote healing. Or stem and progenitor cells, which are able to deploy from their protected niches to repair injured tissues. Even tumor cells eventually learn to migrate, to devastating effect.

To fully understand cell migration, scientists would gain from being able to track down individual cells, even as the cells move through the body. While careful studies using radioactive tags have produced important knowledge about how cells disseminate from one organ to another, it still remains challenging to study individual migrating cells as they move and arrest in specific organs. In particular, the specific migration routes and kinetics of individual cells cannot be obtained from current imaging tools.

About 5 years ago, I became interested in using positron emission tomography (PET) for tracking the migration of single cells in living subjects. PET is primarily used to evaluate glucose consumption by solid tumors. At the time, PET was not thought to be sensitive enough to detect single cells, let alone track their migration in real time.

A PET scan uses a minute amount of short-lived radioactive material to tag molecules and cells and visualize their localization in living subjects. These radioactive tags emit small bursts of antimatter (called positrons), which in turn trigger the emission of pairs of back-to-back photons. Any time two photons are detected in quick succession, we can assume they came from the same radioactive source and, therefore, that the emission occurred somewhere along the line that spans between the two detection spots. For a typical PET scan, hundreds of millions of such “pings” are detected by the scanner, then reconstructed through a mathematical algorithm into a volumetric image that represents the distribution of the radioactive tags within the body.

However, if the tags are solely contained within a single cell of interest, we can dispense with image reconstruction and, instead, compute the position of that specific cell directly from the stream of data coming out of the scanner. Mathematically, the basic idea behind our approach is that the lines from the detected pings should all intersect at the location of the tagged cell; in fact, two non-overlapping lines are sufficient to determines its position in 3 dimensions. As the cell moves, the PET scanner receives additional pings and can update the assumed position of the cell in real time—a process similar to how GPS devices work.

In an initial computational study [1], we found that PET tracking would be feasible provided that we could label single cells with about 10 Bq of radioactivity—enough to generate 1 ping per second in a sensitive PET scanner. To test this hypothesis, we first flowed small radioactive droplets through a length of plastic tubing and successfully measured their position in real time using the data from the PET scanner [2]. Next, we wanted to track live organisms using this approach. We chose Argentine ants as a suitable model, as they were readily available in the courtyard outside the lab. After spiking their favorite food (tuna) with a small dose of radioactivity, we tracked their movements inside an opaque jar and were able to observe their frantic pacing as they searched for a way out.

Seeing those dots move of the computer screen gave me great hope that tracking mammalian cells in vivo would be a straightforward matter. Unfortunately, tagging cells with radioactivity turned out to be far more challenging than expected. But, after several failures [3], we finally identified a highly efficient method to transfer radiometals into cells. The method uses nanoparticles made of mesoporous silica, a sponge-like material that efficiently traps radiometals (e.g. 68Ga and 89Zr), to carry the radioactivity into the cytosol. With this approach, single cells require about 40 nanoparticles to be tracked reliably inside a PET scanner.

By the time cell labeling had been fully worked out, we discovered, to our dismay, that our PET scanner had broken down and moved our experiments to a different instrument. Because our method reads raw data from the PET scanner, we had to figure out the custom data format used by this new scanner. We also had to deal with an unexpected challenge: this new instrument had been built from lutetium oxyorthosilicate, a material that contains a small amount of naturally occurring radioactivity. We adapted to these challenges and devise new protocols and processing methods to handle the unexpected background.

We were finally ready to move on to in vivo experiments. For the first demonstration, we chose to focus on a model of breast cancer metastasis to the lungs. Breast adenocarcinoma cells (MDA-MB-231) were tagged with radioactivity, then injected intravenously into nude mice. Cancer cells that travel through the venous system are known to be trapped by the narrow capillaries in the lungs. Indeed, when 1 million cells were injected, a clear PET signal was detected in the lung region. The key question was, however, whether we would still detect a signal when only a single cell was to be injected. We diluted the cell suspension until we had single cells isolated inside microwells (as confirmed by microscopy) and verified that individual cells had 20-100 Bq each, as desired based on our previous studies. Single cells were then loaded into syringes and injected into the tail vein of mice.

In all the cases we examined, we were able to identify a single locus of radioactivity in the lungs. The signal was clear and unambiguous. One of the advantages of our approach is that hot spots in the images can be presumed to originate from single cells (or cell clusters), since cell-free tracer does not aggregate and give rise to this type of signal. Careful dissection of the lung confirmed the presence of single cancer cells in that organ. We also extended our approach to use 89Zr, a radioisotope with a half-life of 3 days, allowing us to conduct long-term tracking experiments. Finally, we were able to observe the motion of the individual cells though the venous system, prior to arrest in the lung. We found that cells travel at an average speed of 50 mm/s and reach their final arrest site in the lungs 2-3 seconds after injection.

This first demonstration opens the door to a host of new applications. For instance, we are very interested in applying this technique to understand the migration of immunotherapeutic cells in cancer patients. Being able to identify the migration routes and kinetics of therapeutic cells would enable more efficient delivery of these precious cells towards the solid tumors they are intended to treat. We are also looking at ways to track multiple cells per subject, using statistical approaches to cluster the PET data and separate the pings from different cells within the same subject. This work continues and we will provide updates as we reach new milestones.

I hope this post will have been useful in telling the story behind our paper. The team certainly faced numerous setbacks and challenges, yet we persisted and finally were able to track these tiny cancer cells as they zoomed through the blood stream. In closing, I want to give copious thanks to the many individuals who contributed to this work, especially Kyungoh Jung, who took the lead on this project and made this crazy dream of tracking single cells come to fruition! 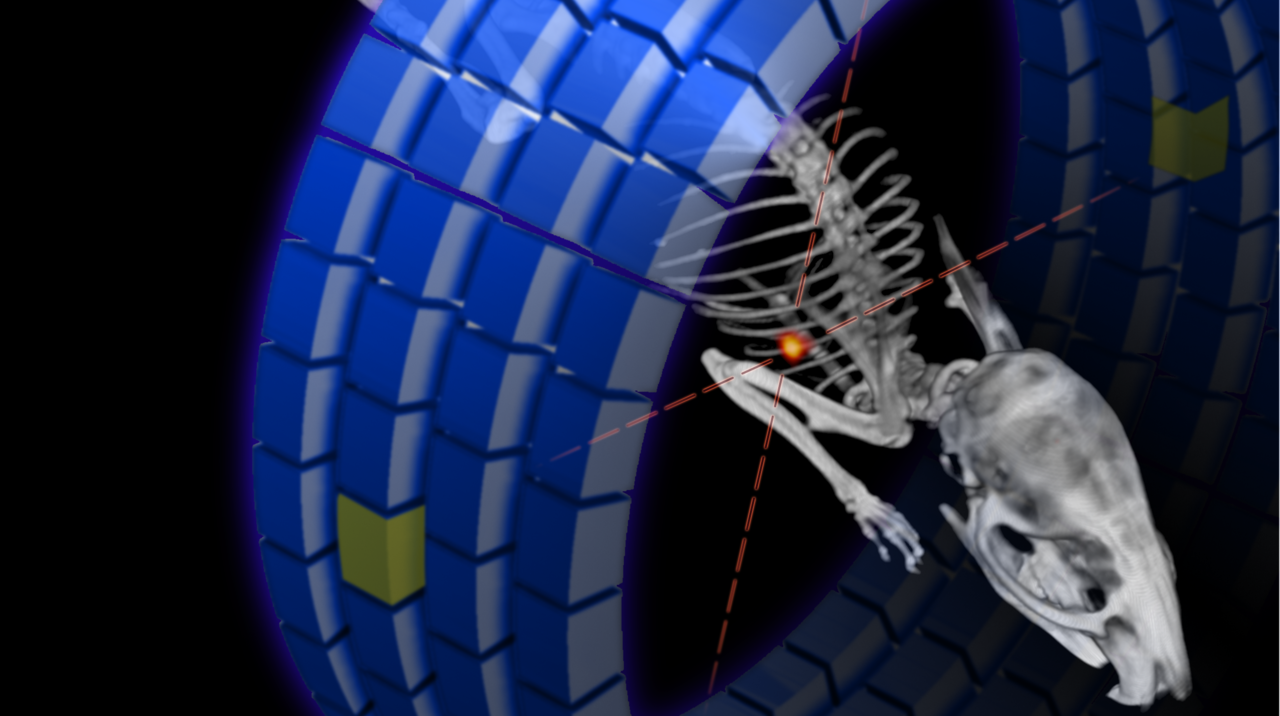 Positron emission tomography is widely used to image tumors. But is it sensitive enough to image and track single cells?