Little did we know as we planned this full-scale demonstration of rapid antibody discovery for pandemic responsiveness, that it would be activated so soon.  The lessons learned here prepared us well for the arrival of a true pandemic virus, SARS-CoV-2, less than one year later.

Beginning in December 2018 the Rapid Rational Antibody Design and Delivery (RRADD) team planned not only the basic sciences of how to respond in the moment to a viral pandemic by developing, validating, and manufacturing antibody-based medical countermeasures, but kept a clear eye towards the practical demonstration and implementation of the platform. This massive effort sponsored by the Pandemic Prevention Platform (P3) program at DARPA.  The philosophy underlying the program is in line with the approach of Louis Pasteur, "chance favors the prepared mind". As with all DARPA programs the goal is to push the envelope of what is feasible.  The end goal is to build a ready-to-deploy platform capable of producing human ready doses of a protective antibody within weeks of the emergence of a novel pathogen. Of course, in the current environment, this now can be recognized for the incredible foresight involved in designing the program several years ago, and for the incredible difficulty in actually achieving the goal.  We have much gratitude for current DARPA P3 leader Amy Jenkins, and her predecessor, Matt Hepburn.  Their passion, well-intended antagonism, and massively high expectations pushed our group at every turn. The group itself spanned coast-to-coast with five groups involved: 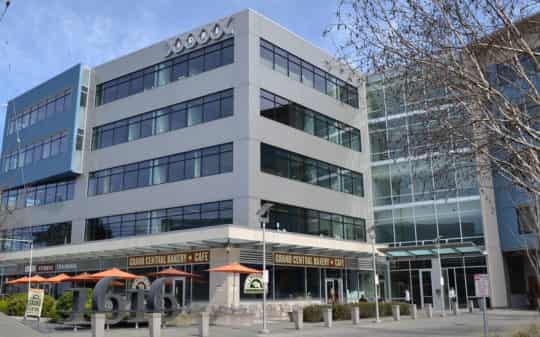 In late September 2018, after nearly a year of developing and testing tools and approaches, all groups converged for an intense 2-day meeting at IDRI headquarters in Seattle, WA.  Like many great collaborations, it started with a wonderful meal, which is shockingly easy to find in Seattle.  One of the key decisions was identifying the target pathogen for our planned 2019 "capabilities demonstration".   As part of our DARPA P3 program, we were required to do regular end-to-end exercises of the platform we were building.  These "sprints" would let us know how close we were to the goal of going from convalescent human donor samples to validated therapeutic leads in a matter of weeks. Our specific goal for sprint 1 would be to get through NHP studies in less than 90 days.  The choice of viral target involved numerous factors, some obvious like pandemic spread potential, others practical like it being BSL2-compatible as we were not prepared at that point to carry out the full platform at BSL3. After much discussion, we settled on Zika.  It had a mix of challenges and advantages that seemed appropriate to the current state of the project.  In the asset category was the overall group expertise in Flaviviruses.  A key challenge would be that previous studies indicated that the circulating IgG class-switched B cell frequency in recovered Zika patients was quite low (0.1%).  As a comparison, in many Ebola-recovered patients this frequency can reach 2%.   We would be truly looking for a needle in a haystack with time pressure upon us.  In addition to the many other discussions on scientific strategy (down-selection strategies, neutralization testing paradigm, antibody discovery workflows, etc), we set aside considerable time for logistics planning.  Not as exciting, but just as critical for the goals in this project.  For us to achieve these rapid discovery goals with participating sites spread out across the U.S., would be a challenge of its own.  In these sessions, we mapped out streamlined instant communications plans, real-time data sharing, and country-wide "lab meeting" schedules during the sprint.  We also went over the numerous lessons learned from expedited shipping trials across year 1 (yes you really can ship out or receive overnight packages on a Sunday, if you know how).  In these talks, we also went over all of the "worst-case" scenarios we could imagine and mapped out our intended responses. One of these actually came to pass, more on that later. In retrospect, these hours spent going over logistical and strategic details were nearly as valuable as the time spent on science.

Fast forward to a few days out from the intended beginning of the sprint, and we had the great(?) idea to "live-tweet" the entire process. This added equal parts fun and fear.  There was now a celebratory element to the process, but also the chance for public failure. 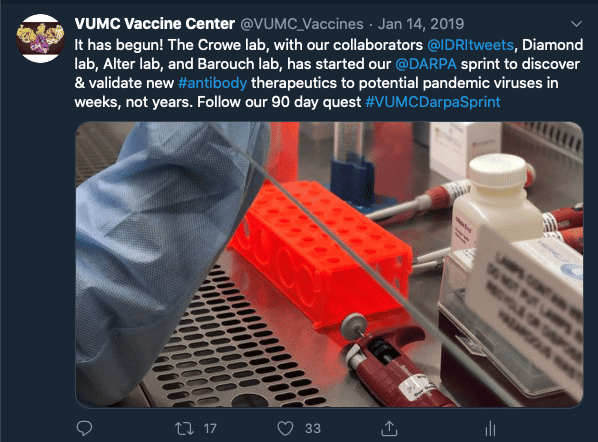 After isolating the target-specific cells, we raced to sequence the variable domain coding regions of the antibodies we had isolated. 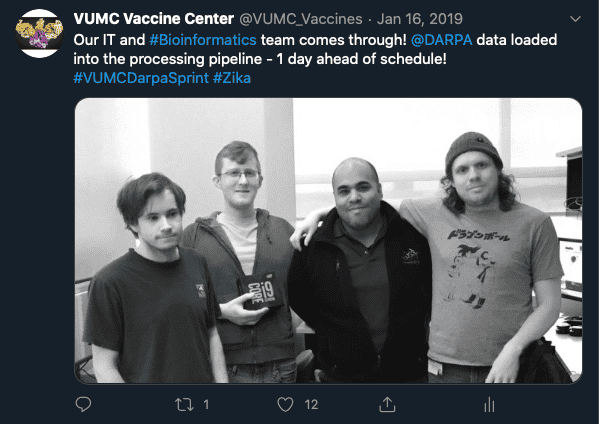 Next, we analyzed the results to down-selected to the panel of potential winners.  I still remember clearly the meeting after that where it turned out all we had from one approach was uninterpretable noise. We had run two methods through our sequencing workflows. One was more specific but yielded far fewer B cells.  The single-cell workflows were not optimized for this alternative workflow, and the data that came out was not usable.  So two days in, and we had essentially go back to start with one major wing of the work. This was exactly one of the worst-case scenarios we had discussed back in Seattle. Given that each team would be pushing the envelope to the limit of their capabilities, tracking multiple sprints could be a disaster. The plan was to only continue on multiple parallel paths if essential. For example, at a late time point when some neutralizing antibodies were known, stopping the development of some antibodies could be tolerated.  However, we were at the beginning with no idea of the optimal approach. After a good discussion during an all hands on deck call with all labs, and with an audible gulp, we pushed forward one sequencing set to the synthesis of the antibodies and rebooted the other approach at sequencing. This points to a key difference between expedited workflows and normal work.  In a normal set-up, we would have paused the forward progress of the first batch of antibodies and allowed the second batch to catch up. That is the most efficient and logical decision and far simpler in the long run.  However, the time pressure pushed us to essentially two sprints on different timelines.  Looking forward to our SARS-CoV-2 sprint, this came up in a much bigger way.  In a real pandemic, we could not wait to "see how it turns out".  So we implemented multiple distinct workflows starting from multiple distinct human cell samples.  Still not sure of exactly how many parallel things we had going, probably more like 5-10 parallel workflows. There was no possibility of being efficient and waiting for everything to align nicely. So this quite unexpected practice in dealing with an unusual lab situation turned out to be great preparation for what turns out to be the "usual" situation when dealing with a true pandemic.

After sorting this out, synthesis and cloning was rushed by our great partners at Twist Biosciences.  Due to a strong partnership we had built with them, we were prepared for the arrival of 100's of DNA plasmids containing our antibody genes of interest for further investigation. 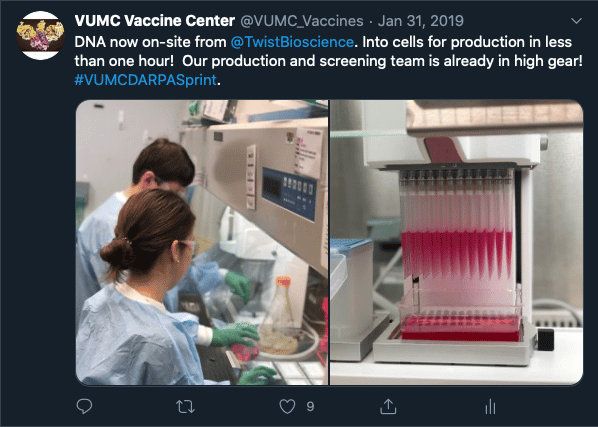 Within one hour of the plasmids arriving in the lab, they were already transfected into our CHO cell expression system. The day before this picture was the last day either of them would have off of work for 1.5 months! 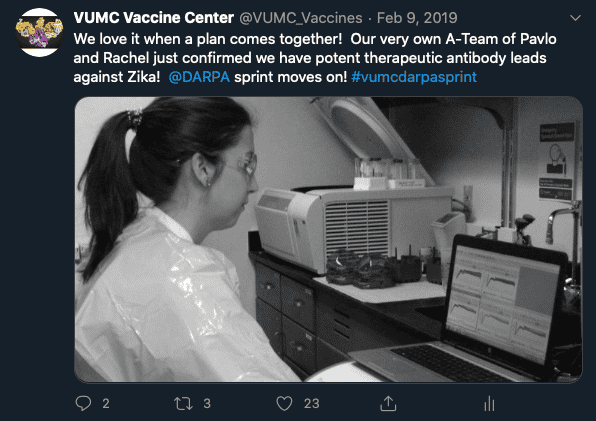 Another foreshadowing event in the Zika sprint for the SARS-CoV-2 work was adapting the new (to us) neutralization screening approach using the RTCA system by Acea. This allowed us rapid, real-time, and highly quantitative screening for viral inhibition.  We had a demo of this system in December 2018 (one month before the sprint launch) and the real-time analysis of neutralization was a perfect fit for our needs. We felt like we could not live without it, but did not have time to order the system in time for the sprint start. Fortunately, Acea worked with us on an "extended demo" that allowed us to do our work and bridge us to a system of our own, that did not come until after the key screening period in the sprint. Fast forward to COVID-19, we had the confidence, and perhaps bravado, to adopt another brand new technology, the Berkeley Lights Beacon, into our antibody discovery workflow.  It ended up being a key part of our work. 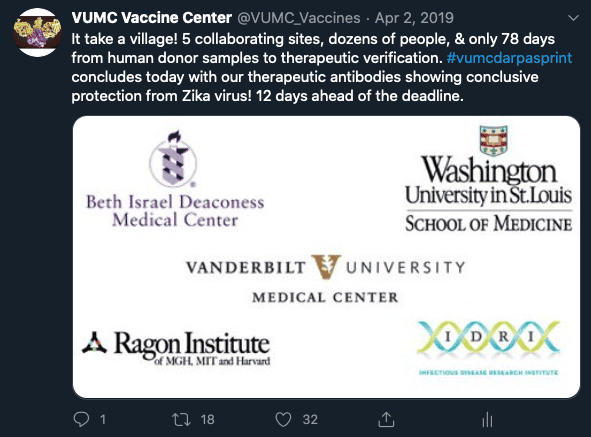 It takes a village

After our discovery stage, these antibodies went to our great partners at IDRI for RNA encoding and manufacturing of the RNA delivery vehicle, and in vivo validation by Mike and Larissa at WUSTL. This was considerable back and forth as we were iteratively using in vivo protection by protein and RNA-delivered antibodies. It took massively expert and empowered labs to do the type work on this scale that is typically reserved for the final step with a few "winner" antibodies. After several weeks of intense work by these colleagues, we were able to settle on the best antibodies and jump to NHP validation with the Barouch lab at BIDMC.  Not even covered in the paper is that, in parallel, IDRI, built GMP-like process for the winner antibodies to model expanded production for clinical trials.  So another key takeaway from the Zika sprint was the absolute necessity of tightly integrated experts across multiple domains.  The five labs participating in the Zika sprint functioned more like a single lab than any other collaboration in which I have ever participated.  This same level of integration was absolutely required for the stressful and breakneck pace of the SARS-CoV-2 sprint response. It was a partially different group of collaborating labs, but drawing on our lessons from Zika on communication, shipping/logistics, sharing of data and resources (including shipping multiple full instrument systems during the pandemic between sites to get work done), and flexibility, we were able to quickly port this into a new collaborative group with the same level of functionality.

I hope it is obvious, we held ourselves truly accountable (as much as was possible) to the timeline goals of this project.  In 78 real days (not business days) we went from human donor samples to validated antibodies delivered using a rapidly scalable production system. Putting ourselves through this intense process yielded many insights and advances, we may not have been forced into otherwise. However, when it was over, I think the entire experience for us was accurately summed up by lead author Pavlo Gilchuk, "That was fun, never ask me to do it again". 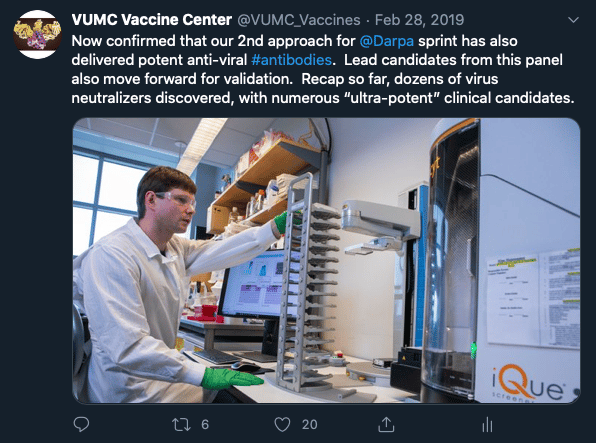 Little did we know, we would be asking again, with much higher stakes less a year later. The story continues here: https://naturemicrobiologycommunity.nature.com/posts/human-monoclonal-antibodies-for-sars-cov-2 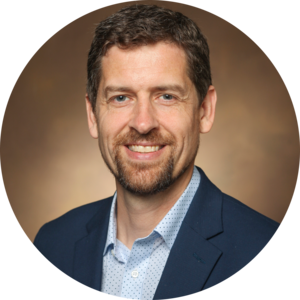