Mimicking the molecular architecture of channel-forming membrane proteins of a target microbe can be used to design host defence peptides that specifically target a particular pathogen, as shown here for Mycobacterium tuberculosis.

Growing up, my dad, who is a pulmonologist, always told me that if we weren’t careful, the bugs would win. As a result, for as long as I can remember, I’ve been fascinated, perplexed and admittedly a little terrified by antimicrobial resistance.

When I joined the Precision Therapeutics and Bioresponsive Materials lab at Penn State in 2016, the lab was just being formed and my advisor was luckily open to new research endeavors. It became clear to me that I could combine my advisor’s experience with therapeutic peptides and my own interest of finding innovative ways to effectively treat respiratory infections, especially those with high risk of exhibiting drug resistance. I decided to focus this work on tuberculosis. But why would I choose that of all things to work on? It’s hard to culture, doesn’t behave like other bacteria, and basically no one gets it anymore... right?

Tuberculosis (TB), a bacterial lung infection caused by Mycobacterium tuberculosis (Mtb), is actually the leading cause of death worldwide from a single infectious agent, leading to one and a half million deaths each year. The World Health Organization also estimates that a quarter of the world’s population is infected at any given time. Frankly, the disease and our understanding of the pathogen behind it doesn’t get the attention it deserves because “consumption”, as it was once called, isn’t a problem in most developed western countries. Worsening the global outlook, reallocation of resources and limited access to medical care as part of the response to the ongoing COVID-19 pandemic is expected to add hundreds of thousands of deaths to that annual toll. But if nothing else, the dramatic response to this pandemic has shown that a committed response can lead to significant progress, giving hope that one day we can end this silent pandemic that has plagued humanity for millennia.

Tuberculosis also played into my scientific interests, as well. Because it is slow growing, antimicrobial peptides could provide benefits over traditional antibiotics. Conventional small molecule drugs often rely on disrupting metabolic processes in the cell. That makes Mtb difficult to target because the bacteria can hide, tucked away within our own immune cells in a metabolic dormancy, further protecting them from our treatments. Lytic peptides, however, can disrupt the membrane of cells regardless of its replicative state, essentially killing the cell by poking holes in it like a balloon.

As I started looking into anti-tuberculosis peptides, I found that many reported sequences had little to no specificity – they killed most bacteria they came into contact with. It is well known that disrupting the commensal microbiota, the “good” bacteria living in and on us all the time, can have serious negative effects on our body’s health. I knew there had to be something better. I resolved to make my own peptide. But where to start?

A great source of inspiration for drug design is nature, as it has already gone through generations of evolutionary refinement to find an optimized solution. In this work, I looked to natural membrane proteins that form channels within the outer mycomembrane of the Mtb pathogen as a template. By structurally and sequentially mimicking porins, or channel forming proteins, I designed the sequence reported in our new paper, MAD1. Through this protein-mimetic design paradigm I was able to impart high bacterial specificity to the peptide template, without sacrificing anti-TB potency. Evidence suggesting that bacteria are unlikely to circumvent the action of these types of antimicrobial peptides indicates this strategy may be able to produce a robust pipeline of powerful new antibacterials in our endless fight against drug resistance.

More broadly, while this work directly addressed Mtb, it also lays out a framework by which precision therapeutics could be developed towards other multidrug-resistant respiratory infections without the risk of destroying the sensitive, yet critical, commensal population. As we have seen with the effective integration of modern vaccine technologies to fight the COVID pandemic, persistence in creating and pursuing new antimicrobial strategies will be a critical tool in the continued evolutionary arms race with bacteria. 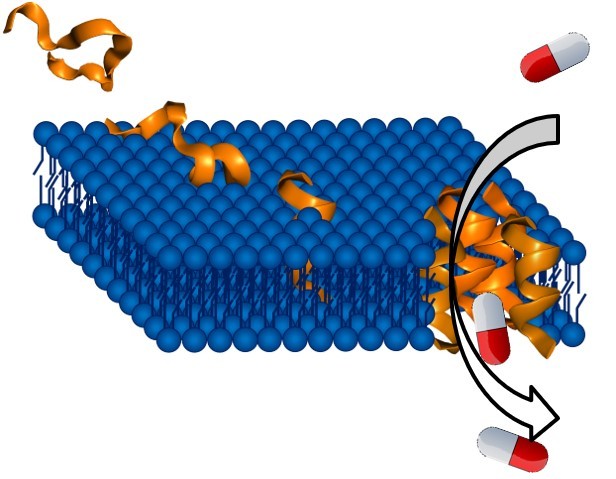 Structural and sequential mimicry of genus-specific membrane proteins enables potent and selective toxicity towards the pathogen of interest.