In contrast to genetic circuits, here the authors develop protein biocircuits based on proteases. They show these activity-based circuits can execute Boolean logic for programmable drug delivery and perform fuzzy logic to solve a mathematical oracle problem, Learning Parity with Noise.

In synthetic biology, we strive toward the vision of Programmable Medicine, wherein therapeutics and diagnostics possess the power of computation. In this future generation of post-modern medicine, therapies will query the host environment, while performing dynamic calculations and learning from past experiences to elicit a personalized dose-response. For the past three decades, the field has made considerable progress, particularly in the area of synthetic gene circuits, which have recapitulated a variety of computational functions including Boolean logic and state machines [1, 2]. These circuits have demonstrated a number of useful applications, including diagnostics [3] and sense-and-respond drug circuits [4, 5].

Most of the biological systems with which we want to communicate have already evolved the capacity to compute information in some form or another - from electrochemical gradients in neurons to networks of cell-signalling cascades. Due to the vast diversity of programming languages and environments present in our bodies, it is unlikely that a singular, silver-bullet approach to biological circuits will suffice. Rather, programmable medicine will likely require an equally diverse suite of multimedia - from physical/electronic devices to biological materials and living cells, unified by the first-principles of computational logic.

Inspired by this vision, we sought to use our lab's expertise in protease diagnostics to construct an activity-based (i.e., fast compared to circuits that require gene expression) biocircuit. Our first brainstorms resulted in an array of peptide constructs, modifying our existing protease-sensors into constructs that would recapitulate the functions of boolean logic gates (e.g., AND, OR, etc.). The biggest challenges with proteases that arose were (1) composability and (2) the NOT gate. (Note: while these features have been achieved in other ways [6, 7], we wanted to implement a streamlined design that was cell-free and didn't require protein engineering.) Composability is the idea that the inputs of a logic gate speak the same language as the outputs - which means that you can connect multiple gates in sequence. This was the inspiration for the peptide-caged liposome design, where a liposome particle "hiding" a cluster of proteases is shielded by layers of peptides. In order for the liposome to release its contents (i.e., outputs), the peptide layers must be fully degraded by the input proteases. Then, the released proteases can go on to degrade a second layer of peptide-caged liposomes, and so-on. We named these devices "biocomparators" because the peptide cage acts as an activity threshold, where a minimum level of protease activity is required to unlock the cage - this nicely mirrors the function of a voltage comparator used in digital electronics. Under this framework, the NOT gate fell nicely into place - if we loaded the biocomparators with specific protease inhibitors, the output could inactivate the very proteases that activated the gate. Even more useful perhaps, is that these inhibitors can be targeted to any other protease in the system. When we combined all of these features, we found we were able to design an analog-to-digital converter!

At this point in the project, we took a step back and tried to think of ways we could take activity circuits in a different direction. We realized that most biocircuits use digital logic, but far fewer have constructed purely analog circuits. After all, many biological systems are analog-in-nature, so why not apply this same logic to the circuits we use to manipulate biology? We saw how the design of quantum computers, which are analog systems, are proving useful in a number of areas where traditional, digital computers have been stuck for decades. Inspired by this idea, we imagined ways in which we could create an analog signal where proteases are dynamically partitioned between two-states. This is similar to how with genetic circuits, the cellular machinery are partitioned between the host genes and the inserted construct (i.e., shared resources). We pared down this concept down to a population of proteases that is shared between two unique substrate targets (i.e., substrate-A and substrate-B). Under this framework, the fraction of proteases devoted to cleaving either substrate is a continuous value between 0 and 1 (i.e., the signal) and this signal can be manipulated by controlling the relative concentrations of either substrate (i.e., the analog operation).

In its final form, our recent paper presents circuits that can treat information as either analog or digital, which stand as the two main pillars for signal processing. First, with our digital, cell-free circuits (i.e., biocomparators) we demonstrated an analog-to-digital converter that can automatically dose bacteria across a wide range of concentrations. Second, we showed that circuits using analog operations can be used to solve a mathematical problem, Learning Parity with Noise. Ultimately, we hope that this work will serve as an inspiration for the design of more circuits that process biological information through a variety of media. 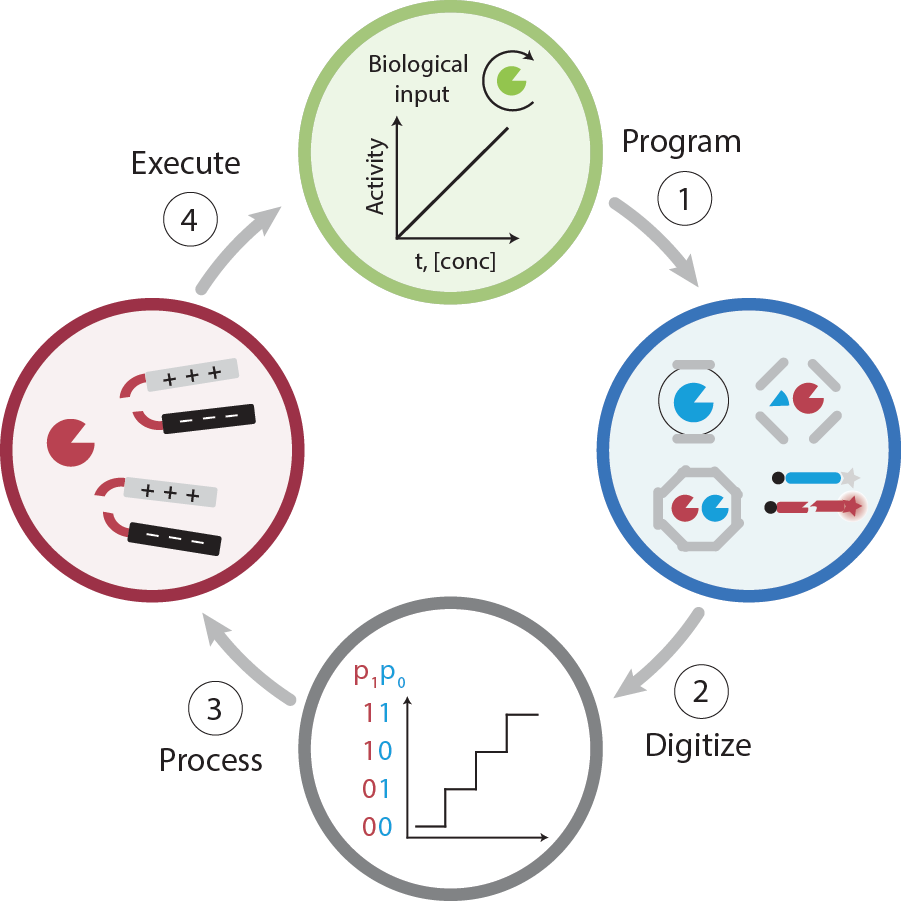 We explore protease activity as a medium for processing biological information via Digital boolean logic, or as multi-valued Analog signals.