Recreating the organization of the human brain in a dish

Studying human brain development in the early embryo is a near impossible task due to the lack of access to tissues. Based on developmental biology principles, we recapitulated the early patterning of the human embryonic brain in the lab by combining microfluidics with human embryonic stem cells.
Pedro Rifes
Assistant Professor, University of Copenhagen, Department of Neuroscience
Follow
Like

Patterning of the human neural tube is modeled in a microfluidic device.

As early as the third week post fertilization, the foundations of the human brain are being launched, with the establishment of the anterior to posterior (or rostral to caudal) axis.

Since human fetal samples at these stages are exceptionally rare, research on early brain development relies entirely on non-human vertebrate embryonic models. Among other things, conceptual frameworks learned from these model systems have sustained the rationale of direct differentiation of human pluripotent stem cells (hPSC) into region-specific neuronal types, such as the ventral midbrain dopaminergic neurons, essential for disease-modeling research and potential therapies for Parkinson’s Disease1. Therefore, expanding and detailing the human-specific knowledge on how the embryonic brain regions are formed will be of extraordinary importance for the understanding and potential treatment of numerous pathologies.

Ever since the establishment of the first human embryonic stem cell (hESC) lines, the idea of harnessing their pluripotency to recreate a human tissue in the lab has lingered in the imagination of scientists. The budding of a optic cup from a cluster of cells in a dish2 was a striking example demonstrating that the self-organizing properties of hESCs could be purposefully nudged into complex embryonic tissues. Since then the field has exploded into a profusion of hPSC-derived organoids, notably brain organoids3, driven by the self-organizing properties of clusters of hPSCs to generate a random amalgam of different cells. Amidst these exciting times, we (and certainly many others) reckoned that this self-organization could be better guided towards more controlled and predictable outcomes, by engineering cues which cells could build on.

Based on the anterior-to-posterior patterning induced by WNTs during development, we hypothesized that neural differentiating hPSC, under a gradient of WNT signaling to provide the adequate positional information4, would generate distinct forebrain-midbrain-hindbrain identities along the engineered gradient. The exposure to a continuum gradient would also enable the full spectrum of cells to arise spontaneously, beyond what could be achieved with individual concentrations in culture well plates. To achieve this, we created a device that maintained a stable linear gradient of a small molecule WNT agonist, while holding and differentiating hPSCs up to two weeks, after which regional identity could be ascertained. Our bioengineering team at Lund University led the design and creation, contriving a microfluidic chip to generated the linear gradient flowing into a cell culture chamber.

This truly cross-disciplinary collaboration was challenged by several hurdles, such as the search for materials which were both cell-compatible, suitable for microscale milling and robust to withstand many rounds of autoclaving and long periods of exposure to humidity in the incubator. Concern over bubbles, getting rid of them and keeping all bubble-free became a crucial matter for the stem cell biologists in the cell laboratory. Though a HUGE problem in the beginning, we found that pre-wetting the system, pre-heating the media, increasing the hydrostatic pressure and smoothening the edges of the microfluidic channels could largely solve this problem. After several rounds of trial and error, these efforts resulted in a sleekly engineered, easy-to-assemble, modular device and a set of assembling procedures that consistently generated a neural tissue organized into a forebrain-to-hindbrain array. This combination of microfluidic culturing techniques and hPSCs to model of early human brain development, that we termed MiSTR – Microfluidic-controlled STem cell Regionalisation – was presented in our recent Nature Biotechnology publication.

The MiSTR-derived tissue was clearly and consistently patterned with an anterior-to-posterior orientation from 24-48 hours onwards. Single-cell RNA sequencing analyses reinforced the prompt 24-48 hour anterior-posterior separation underlying the regional organization, visible 2 weeks later. At this time point, we observed a variety of neural cell clusters, spreading from forebrain to hindbrain, in addition to neural crest cells and early neuronal lineages emerging from different regions.

One surprising and distinct feature of our model was the emergence of isthmic organizer cells; a key hallmark of brain development and a critical source of local morphogen arising at the boundary between the midbrain and hindbrain regions5. This observation has allowed us to conclude that even when experimentally deconstructing development to only a single, linear growth factor gradient (in this case of WNT), it is possible to achieve a complex tissue which forms a secondary organizer region, thereby carrying on local patterning on its own.

To gain perspective, we then integrated our single-cell MiSTR data with previously published datasets from in vivo mouse embryonic development6 as well as from in vitro human brain organoids7, 8. Notably, we found that the midbrain-hindbrain boundary signature, clearly visible on the mouse embryo dataset and on our own data, could not be observed on the human brain organoid datasets, indicating that the variety of cells obtained with the MiSTR was closest to the in vivo data.

Overall, the single-cell analysis, particularly suited to grasp the diversity from a complex cell population, showed us that our effort to engineer a full, orderly array of brain regions had payed off. Our MiSTR model allowed for a peek view into the first steps into the establishment of anterior-posterior human neuroaxis, or the formation of the pivotal midbrain-hindbrain boundary, covering a human embryonic window previously inaccessible for researchers. As new human neurodevelopmental data emerges, the research using the MiSTR model will continue to provide insight into the early embryonic stages, ultimately contributing to fill in the numerous gaps in our knowledge on how our brain is formed.

Check our publication using the link below: 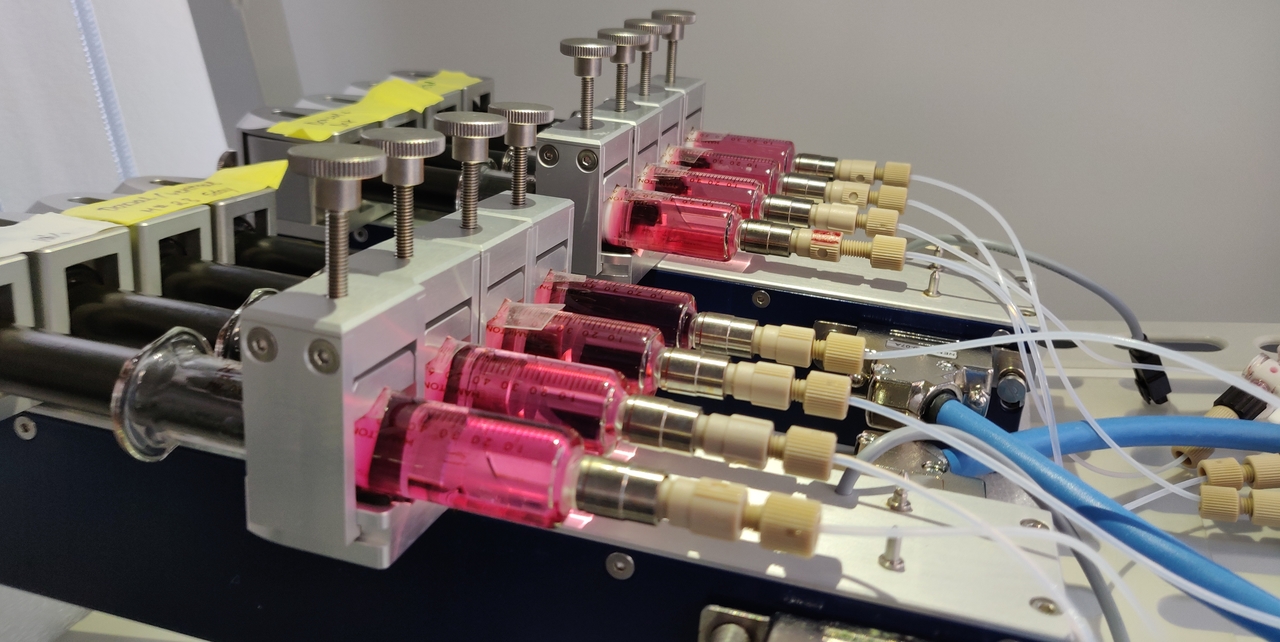 Recreating the organization of the human brain in a dish

Studying human brain development in the early embryo is a near impossible task due to the lack of access to tissues. Based on developmental biology principles, we recapitulated the early patterning of the human embryonic brain in the lab by combining microfluidics with human embryonic stem cells.