In our Nature Chemical Biology paper, we describe a general and convenient method, which uses a genetically encoded noncanonical amino acid, 3-aminotyrosine, to red-shift green fluorescent protein-like proteins and biosensors.

Our group has been interested in developing novel genetically encoded biosensors to peer into cells and organisms to understand communications. Our goal is to monitor biological signaling in real time with excellent spatial resolution and molecular precision in physiologically relevant environments, and eventually apply these new probes to live cells and rodent models to understand communications relevant to diabetes, cognition and behavior, and neurological disorders. Engineering RFP-based biosensors plays a crucial role in achieving this goal. During the past 9 years, our group has developed several biosensors for redox-signaling small molecules by substituting the chromophores of circularly permuted GFPs (cpGFPs) with non-canonical amino acids (ncAAs), mainly tyrosine analogs. The chosen tyrosine analogs are often chemically reactive to analytes of interest, such as hydrogen sulfide and peroxynitrite. In our effort to substitute the chromophores of various GFPs with 3-aminotyrosine (aY) for developing similar, reaction-based biosensors, much to our surprise, the excitation and emission wavelengths of these aY-modified fluorescent proteins were red-shifted by as much as ~ 100 nm.

In our Nature Chemical Biology article, we developed two novel aminoacyl-tRNA synthetases to genetically encode aY in E. coli and mammalian cells. We further used the genetic code expansion technology to incorporate aY to the chromophores of various GFP-like proteins in both natural and circularly permuted topologies and observed green-to-red conversion in all of the tested proteins. Moreover, we modified a panel of biosensors harboring GFP-like chromophore, including biosensors for metal ions, neurotransmitters, and cell metabolites. Spontaneous and efficient green-to-red conversion was observed for all tested biosensors. With little optimization, the aY-modified red fluorescent biosensors retained the molecular brightness, dynamic range, and responsiveness of their green fluorescent predecessors in vitro and in mammalian cell lines and primary neurons. Thus, our method is generalizable and can be used to quickly expand RFP-based biosensors.

We further applied spectrally resolved biosensors for multiplexed imaging of metabolic dynamics in pancreatic β-cells. As expected, we observed the increase of cellular ATP and Ca2+ in response to high glucose. However, the changes of NAD+/NADH and NADPH were more complicated. High glucose induced a transient, several-minute decrease of NADH and NADPH, which cannot be fully explained with the current metabolic model for glucose-induced insulin secretion. Future research is needed to fully understand this process.

Our current technology, however, still has its limitations. One is that the amino acid aY could not yet be produced endogenously, making it challenging to deploy aY-modified biosensors for in vivo imaging. Because several prior studies have achieved genetic code expansion in multi-cellular organisms, we envision that it may be possible to deliver the necessary genetic elements in vivo using viral vectors and further deliver aY or its biosynthetic precursor(s) by oral or other routes. Research is ongoing in our laboratory to examine these biosensor deployment strategies. 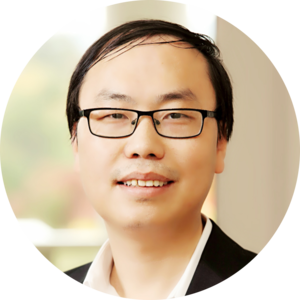 Efficient interhomolog gene conversion in both somatic and germline cells of Drosophila.
Contributor Nature Comms
Behind the paper

Efficient interhomolog gene conversion in both somatic and germline cells of Drosophila.

You can’t drive a tank over lettuce…

Donald E. Ingber,MD,PhD
Nature Portfolio Bioengineering Community
We use cookies to help improve your experience. By continuing to browse our website you are consenting to our use of cookies.
Learn more