The bispecific T-cell engager (BiTE), which simultaneously binds tumour-associated antigen (TAA) and CD3ε, is one of the most potent technologies that can redirect T cells in the tumor tissue to cancer cells[1]. Blinatumomab is the first US Food and Drug Administration (FDA) approved BiTE for patients with B-cell precursor acute lymphoblastic leukemia who are in remission but still have minimal residual disease[2, 3]. Besides this limited application in the hematopoietic malignancies, no BiTEs for solid tumor has been approved clinically up to now. There are several hurdles in developing BiTEs for treatment of solid tumors, including ‘on-target off-tumor’ distractions, severe toxicity in the form of cytokine storm and limited antitumor effect. Due to these limitations, the evaluation of these drugs is often suspended in phase 1 clinical trials, and the in vivo efficacy in patients also remains unknown.

The immune checkpoint PD-L1 was widely expressed by many types of immune cells and the cancer cells in the tumor tissue to restrain the function of cytotoxic T cells. Thus, targeting PD-L1 to redirect T cells could achieve two goals: first, tumor tissue targeting, both myeloid cells and cancer cells can be targeted to improve the specificity; second, blocking the interaction between PD-L1/PD-1 to avoid T cell exhaustion during cancer cell killing.

We further explored the underlying mechanism regrading the therapeutic effect of PD-L1xCD3. First, we are interested in which cell expressed PD-L1 play major role. We knocked out PD-L1 from both tumor cells and host cells. Surprisingly, the antitumor efficacy completely disappeared when PD-L1 was knocked out from host cell, which is consistent with our previous studies showing that host cells expressed PD-L1 is required for anti-PD-L1 mediated antitumor efficacy[5]. We further established Lyz2CrePD-L1f/f mice (macrophage specific PD-L1 knockout) and Zbtb46CrePD-L1f/f mice (dendritic cell specific PD-L1 knockout) and demonstrated that PD-L1 on dendritic cells is essential for the therapeutic effect of PD-L1xCD3. The conclusion was also validated on Batf3 knockout mice to show that CD103+ cDC1 is required.

Fig. 2 | PD-L1 on dendritic cells is essential for the antitumour effect of PD-L1×CD3.

After searching the literatures, we found that enhancing co-stimulation signalling by anti-CD28 could improve the efficacy of TAA-targeting BiTE[6, 7]. Since our PD-L1xCD3 targets dendritic cells in vivo, which express high level of co-stimulatory molecules (B71/2). We hypothesis that PD-L1xCD3 treatment also enhanced B7/CD28 interaction. Using B71/2 blocking antibodies, we confirmed that co-stimulation from dendritic cells could induce more IL-2 production to prevent activation induced cell death (AICD) in PD-L1xCD3 treatment.

Thus, we conclude that PD-L1×CD3 will predominantly distribute and accumulate in the tumour tissue, targeting PD-L1 positive cells to reactivate the T cells in proximity to them. As dendritic cells express the highest level of PD-L1 in the tumor microenvironment (TME), PD-L1×CD3 mainly targets dendritic cells to not only cross-link the CD3 complex for the first signal activation but also interrupt PD1-PD-L1-mediated inhibition. Meanwhile, PD-L1×CD3 mediated binding to PD-L1 on DCs will release CD80 from the PD-L1-CD80 heterodimer, which can then bind to CD28 on T cells to provide the second signal for T-cell activation. With both the first and second signals activated, tumour-reactivated T cells will overcome AICD and be expanded via IL-2. Thus, T cells in the tumour tissue will be reactivated for effective antitumour immunity and memory T-cell differentiation.

Traditional BiTEs are designed to bridge T cells and cancer cells together directly, enforcing T cells to fight with cancer cells. However, both the quality and quantity of T cells in the TME are very limited. Cancer cells can initiate multiple mechanisms to evade T cell killing including PD-L1/PD-1. In addition, they are not good T-cell ‘activators’ due to lack of co-stimulatory molecules. Thus, T cells may get stuck in the ‘war’ with cancer cells and end up with exhaustion. In contrast, PD-L1xCD3 can bridge T cells with dendritic cells, which express high level of co-stimulatory molecules and favor T cell activation. Thus, T cells can be fully activated and expanded with IL-2. Sustained T cell activation can improve the quality and quantity of ‘soldiers’ to win the ‘war’ with cancer cells.

We are working on improved version of PD-L1xCD3 with enhanced efficacy and reduced toxicity. 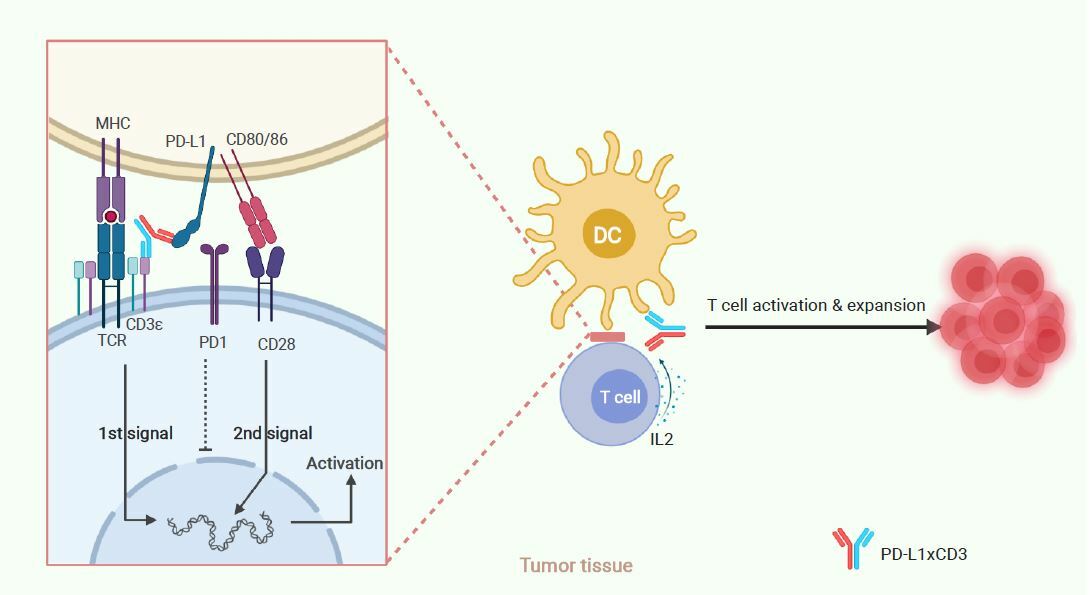