We propose a strategy that transforms the fermentation inhibitor acetate into a favorable co-substrate with xylose for the enhanced supply of acetyl-CoA in engineered baker’s yeast, enabling complete bioconversion of hemicellulose hydrolysates and high-level production of acetyl-CoA derivatives.

The global climate change caused by the anthropogenic emission of greenhouse gasses from fossil fuels is a critical threat to human society, triggering extreme weather, abetting wildfire, and raising sea level. A prosperous and sustainable future calls for new approaches to supplying energy and material required to feed the growing population and drive the economy.

Microbial conversion of plant biomass into biofuels and chemicals represents a promising option to substitute petroleum-based refineries sustainably. However, the establishment of lignocellulose-based bio-economy has been hampered by the unsatisfactory bioconversion efficiency of cellulosic hydrolysates that contain not only sugars but also substantial amounts of acetate, a toxic inhibitor against fermenting microorganisms. Detoxification of acetate in cellulosic hydrolysates remains one of the major challenges towards the commercialization of plant biomass-based biorefinery.

In the current paper (https://www.nature.com/articles/s41467-021-25241-y) [1], we propose a strategy that effectively transforms the fermentation inhibitor acetate into a favorable substrate for the enhanced supply of cytosolic acetyl-coenzyme A (acetyl-CoA) in engineered baker’s yeast, enabling high-level production of various acetyl-CoA derivatives and complete bioconversion of hemicellulose fractions mainly consisting of xylose and acetate.

In earlier work, co-author Dr. Soo Rin Kim, a former graduate student in professor Yong-Su Jin’s lab at the U of I (Jin Lab), engineered a yeast Saccharomyces cerevisiae strain to ferment xylose efficiently [2]. Based on this strain, Dr. Na Wei, a former postdoctoral researcher in Jin Lab, developed another strain with an alien reductive acetate assimilation pathway that is capable of anaerobically co-fermenting xylose and acetate into ethanol with improved yield [3].

During my Ph.D., I was passionate about studying the unique traits of xylose metabolism in engineered yeasts and taking advantage of them for the overproduction of valuable nonethanol bioproducts [4-6]. One of the most exciting moments is when I noticed that over 18 g/L acetate produced in a xylose fed-batch bioreactor was re-assimilated by xylose-fermenting yeast cells within 6 hours. This striking phenomenon made me think about another superpower of yeast xylose metabolism, detoxifying acetate in the presence of oxygen. Indeed, xylose enables efficient acetate co-consumption by engineered yeast under aerobic conditions, which is tightly inhibited in glucose cultures posing toxicity on yeast cells. Through transcriptional analysis, the underlying mechanisms were attributed to the upregulated genes associated with acetate transport and metabolism, the inactivated ethanol production, and the increased culture pH. 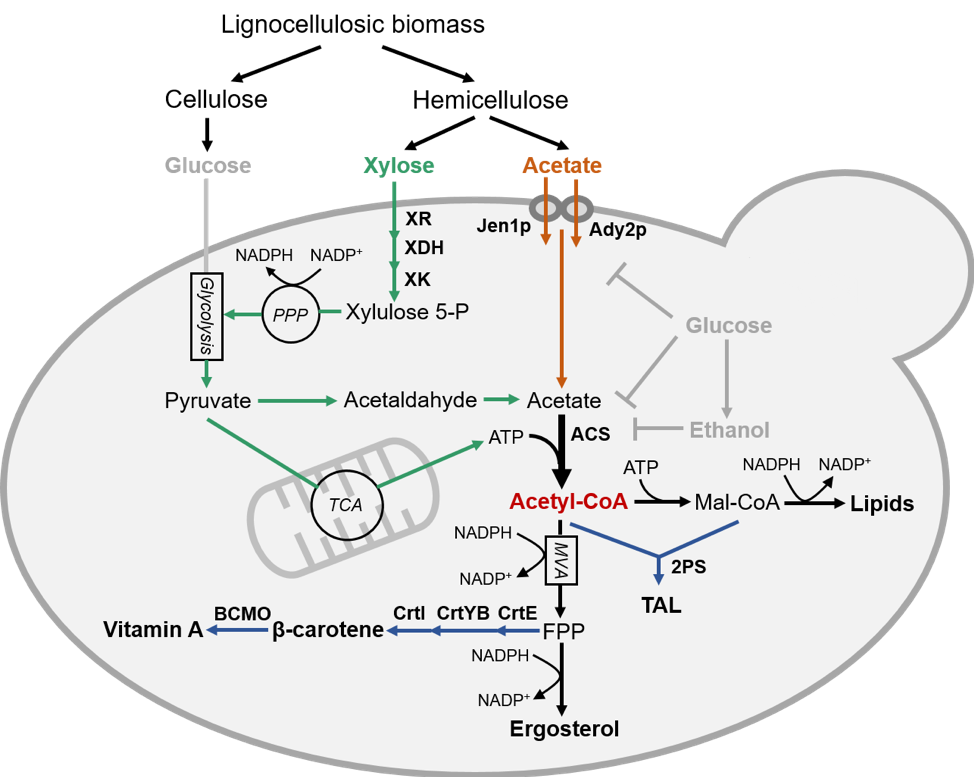 Schematic diagram of the production of TAL and vitamin A from hemicellulose fractions by engineered S. cerevisiae.

More interestingly, acetate and xylose metabolism demonstrated strong synergies in engineered yeast which leads to not only better cell growth and xylose consumption but also a unique metabolic re-configuration that enhances cytosolic acetyl-CoA supply. Based on this metabolic re-configuration, we established a metabolic engineering strategy to produce acetyl-CoA derivatives using xylose and acetate as dual-substrates. Triacetic acid lactone (TAL), a platform chemical for plastic and food ingredients, and vitamin A, an essential human nutritional molecule, were chosen as testbed molecules to examine the potential of the dual-substrate strategy. The highest biosynthetic productivity of TAL and significantly improved titers of vitamin A obtained here suggest that the dual-substrate strategy is highly effective and promising for the production of acetyl-CoA derived molecules from hemicellulose hydrolysates.

Our strategy is particularly meaningful in that it can be seamlessly integrated into cellulosic biomass-based biorefineries as acetate and xylose are predominant components of hemicellulose hydrolysates, which can be readily obtained from lignocellulose materials via thermochemical processing without the need of costly enzymatic hydrolysis. Using TAL production as an example, we demonstrated that substrates in hemicellulose hydrolysates can be completely converted into acetyl-CoA derived fine chemicals. Given the simplicity of the pretreatment process needed, the effectiveness of bioconversion, and the high value of final products, our strategy would enable economic bioconversion processes of cellulosic biomass.

I hope our results will inspire more studies and together contribute to a more sustainable future. 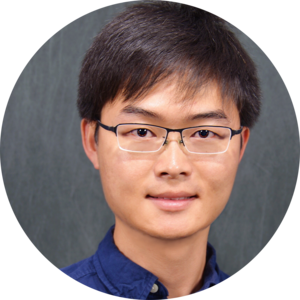