Genetic circuits can be built with bifunctional dynamic regulation of gene expression. Here the authors design a thermosensitive switch for spatial and temporal control of colony pattern, cell shape and polymer production. 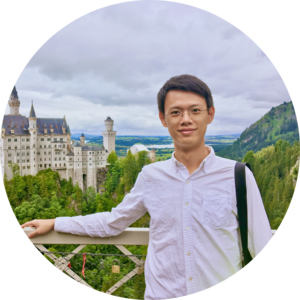 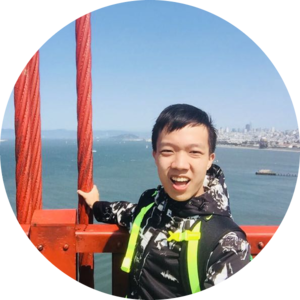 Synthetic biology aiming at building artificial gene circuits with desired functions of controllability triggered by specific signals, including chemicals, temperature, light, etc., namely “bioswitch”, provides possibilities for engineering living cells meeting various purposes. Temperature is an attractive option for many practical uses, especially for biomanufacturing, due to the fast response, good dispersity, and easy operability during the fermentation processes. Hence, we focused on designing thermal dynamic control systems of bifunctionalities based on the uncovered temperature responsive regulatory systems from nature.

In previous studies, the temperature-associated transcriptional regulator CI857, a widely used mutant of CI repressor from bacteriophage λ as a thermo-genetic element, exhibits stringent repression on PR promoter at 30℃, and release the promoter activity at 37℃, forming a mono-function bioswitch that represses and triggers gene expression at 30℃ and 37℃, respectively. Here, we engineered it to be a bifunctional bioswitch with two control panels: 1) The mRFP-control panel (RC-panel), which is the expression cassette composed of reporter mRFP and Tet-family repressor PhlF controlled by PR promoter; 2) The sfGFP-control panel (GC-panel), which is controlled by PPhlF promoter tightly inhibited by corresponding repressor PhlF. Thus, PhlF and its corresponding promoter PPhlF work as a “NOT” gate that reverses the “ON-OFF” signal from the RC-panel, turning on the mRFP expression and off the sfGFP expression along with the increase of temperature form 30℃ to 37℃ simultaneously. The recombinant Escherichia coli harboring this prototyping thermo-switch was cultured at different temperatures and captured by camera under the exposure of blue light (see picture below), generating colorful bacterial cells from green to red at 28 to 42℃ with promising control performance for practical utilizations. 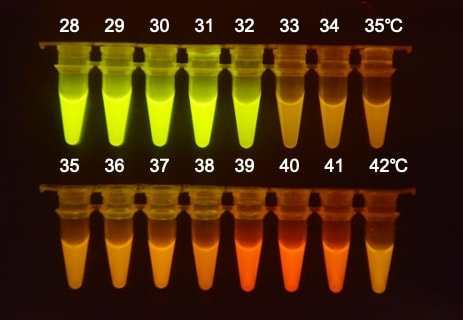 The first idea was inspired by the growth rings of trees triggered by seasonal changes of temperature and humidity. We mimicked this patterning process to build bacterial colony rings on plate. Colonies were cultured under periodically changing temperature for three days with ordered red- and green-rings formation.

However, at the beginning of the prototyping circuit test, we found that only the green rings showed stringent periodic patterns while the red rings displayed step-wise color bands due to the reversibility of RC-control panel. Interestingly, this problem was perfectly solved by introducing a cooperative feedback control of LacI and degradation tags to reduce the recovered expression effects from mRFP at 37℃ periodically. Finally, we achieved the precise control of colony ring formation with predominant and exclusive fluorescent peak of mRFP and sfGFP, respectively. 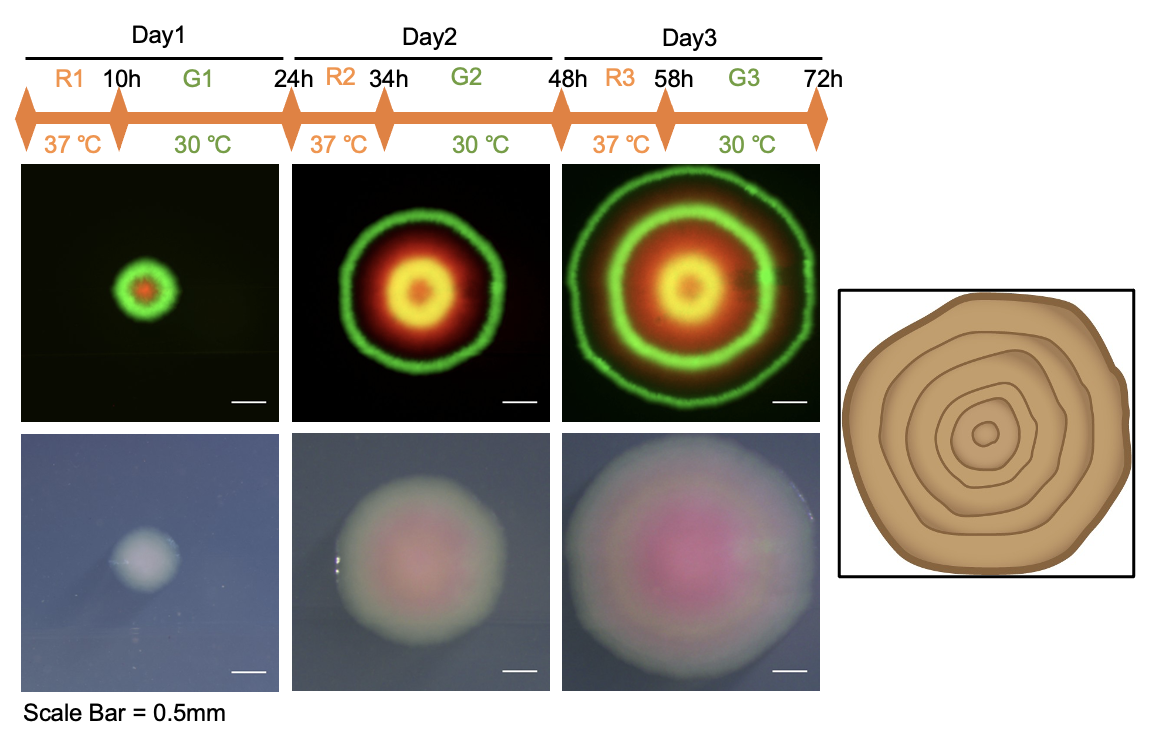 Based on the success of colony patterning on a millimeter scale, we then used this thermo-switch to control cell morphology in single cell level. The fluorescent reporter genes were replaced by two morphology-associated genes, mreB and ftsZ, encoding proteins to control sphere and fiber cell shapes. Recombinant cells grown at 30, 33, and 35℃ in the chamber of microfluidic device showed spherical-, rod- and fiber-shapes, respectively. Furthermore, videos captured in chip chambers recorded the dynamic changes of bacterial cells from spherical- to rod- and/or fiber-shapes by altering culture temperature.

Due to the long-standing challenge of in vivo ordered-assembly of macromolecules, such as block copolymer of degradable polyhydroxyalkanoates (PHA), they highly depend on precise and dynamic control system, we attempted to bring thermo-switch into practical uses for obtaining tailor-made block copolymer of 3-hydroxybutyrate (3HB) and 4-hydroxybutyrate (4HB), namely P3HB-b-P4HB. We constructed the 3HB-CoA and 4HB-CoA synthetic pathways under the control of PR and PPhlF promoter, respectively, to precisely control the polymerization of 3HB and 4HB monomers, resulting in the robust formation of P3HB-b-P4HB. Interestingly, the exchange control mode of these two pathways led to random copolymer accumulation of 3HB and 4HB, namely P(3HB-co-4HB), because of the basal expression level variance of PR and PPhlF promoter, and the ultra-sensitive 4HB-CoA synthetic pathway. The production of these tailor-made copolymers opens the possibility of exquisite control of macromolecule bio-assembly on a molecular scale, however, under a scale-up condition (7-L bioreactor).

In summary, our bi-functional thermo-switch provides a high cell density-response and applicable platform for gene sets modulation over time and level. 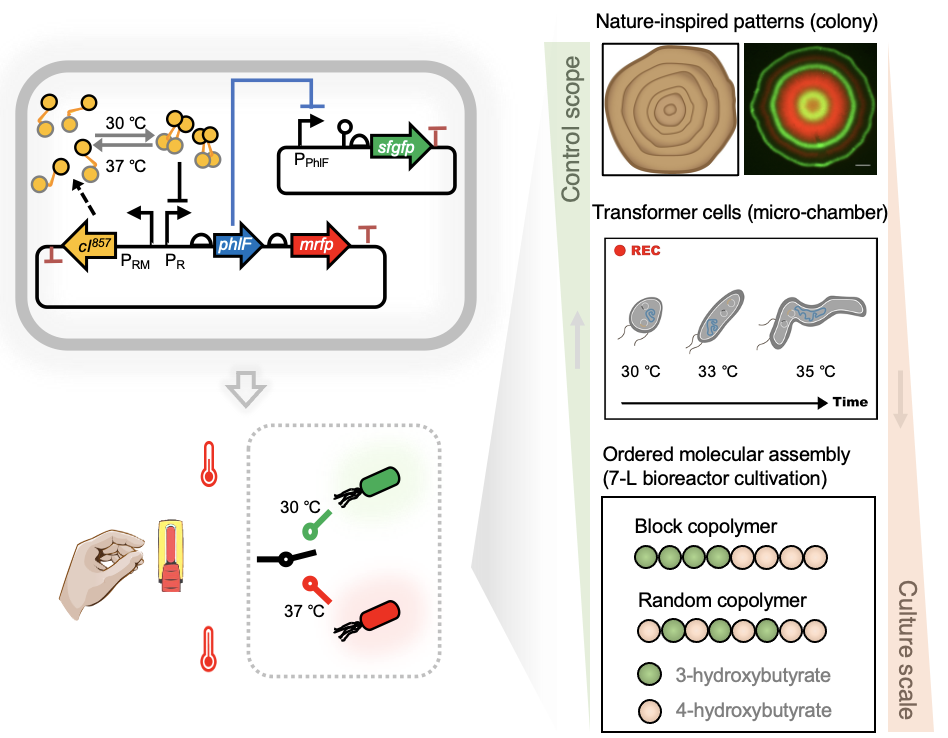