Sneak-peek into the hidden world of neuropeptides: a genetically encoded biosensor for orexins

Neuropeptides play fundamental roles in modulating cellular and circuit functions within the brain, yet we know very little detail about the spatiotemporal aspects of their release. Our new fluorescent orexin biosensor allows us to shine light on these important molecules directly in living animals.
Tommaso Patriarchi and Duffet
2 contributors
Like Liked by Evelina Satkevic and 2 others
0

OxLight1 is a genetically encoded sensor for the orexin neuropeptides. It has been applied in fiber photometry recordings and two-photon imaging in mice during a variety of behaviors.

The human brain is a fascinating and exceedingly complex system. Within it, billions of neural cells act in concert to coordinate both basic and higher functions of our organism as a whole. They use a very special language to communicate with each other: molecules known as neurotransmitters, neuromodulators and neuropeptides. The constant activity and communication ongoing in our brains is maintained as a delicate balance and can be profoundly affected by the smallest of its parts.

A perfect example of this is the case of the orexin system. Both in humans and animals, defects in the release or sensing of orexin neuropeptides causes a disease called narcolepsy. Individuals with this condition are characterized by overwhelming daytime drowsiness and often exhibit cataplexic states, in which they remain conscious but are unable to control body movement, resulting in a sort of paralysis. The direct link between this particular neuropeptide system and such a dramatic alteration in human brain functions, is fascinating and led us to study it in more detail.

To understand how neuropeptides systems like the orexin one acts to maintain a healthy brain function, we need to be able to first observe and then learn to interpret the messages carried by these neuropeptides. Up to now, it has been practically impossible to do so due to the lack of tools that could provide a readout with high spatial and/or temporal resolution. An elegant and simple way to render specific molecules visible at high-resolution through the lens of a microscope are genetically encoded fluorescent biosensors, our favorite technology. The development of tools such as the most famous calcium sensors of the GCaMP family, are the result of over two decades of research dating back to an initial pioneering work by Roger Tsien in 1999. Recently, we and other scientists introduced a new class of these tools, called the dLight and GRAB family of sensors, that can detect neuromodulators, for example dopamine. These were the very first genetically-encoded probes to be engineered from a single fluorescent protein and G-protein coupled receptors (GPCRs, natural neurotransmitters receptors), used as a sensing domain. The emergence of such tools immediately sparked great interest worldwide and encountered broad applications across various fields of life sciences, from neuroscience to drug discovery.

In this new work, we leveraged on our experience in protein engineering to develop a new genetically encoded biosensor, named OxLight1, that is capable of detecting orexin neuropeptides (also known as hypocretins). This sensor is based on a circularly permuted green fluorescent protein integrated into the human type-2 orexin receptor (Figure 1). Compared to the previous screening-intensive efforts deployed for the development of dLight or the GRAB family of neuromodulator sensors, in this work we demonstrated a more efficient tailored screening approach for sensor engineering focused on the insertion/deletion or mutagenesis of individual GPCR residues at a time. With this method we could efficiently optimize a GPCR-based sensor with exceptional sensitivity (maximal fluorescence response of >8-fold) with just 100 variants. We demonstrated that OxLight1 responds to both orexin-A and B with nanomolar affinity, sub-second activation kinetics and high molecular specificity without noticeable coupling to endogenous cellular signaling (demonstrated also with the help of Prof. Miriam Stoeber), making this an ideal tool for probing endogenous orexin release in living animals.

To validate the sensor in vivo we first teamed up with the laboratory of Prof. Denis Burdakov at ETH Zürich, an expert in the orexin field. Using a combination of photometry recording of OxLight1 with optogenetic stimulation of orexinergic neurons, we demonstrated that OxLight1 can accurately report endogenous orexin release in living mice with very high sensitivity. We then used this all-optical system to investigate the relationship between neuronal activity and neuropeptide release, one of the most pressing and long-sought questions in neurophysiology that has remained elusive until now. We revealed that orexin release can already be detected upon brief (1 sec) trains of medium frequency (10 Hz) or prolonged (30 sec) trains of low frequency (5 Hz) optogenetic activation of orexin neurons, and that the level of orexin release correlates with both frequency and duration of neuronal activation. The exquisite sensitivity and rapid in vivo kinetics of OxLight1 allowed us to track endogenous orexin release associated with natural behaviors such as spontaneous running or acute stress (with the help of Dr. Nadine Gogolla), either in a deep brain nucleus or in the cortex. The results from both our optogenetic and natural behavior experiments demonstrated for the first time that orexin neuropeptide signals can occur in vivo in the form of relatively short-lived, or “phasic” bursts of release, the amplitude and duration of which are presumably affected both by diffusion mechanisms and proteolytic activity in the extracellular milieu.

With this new tool we could also investigate orexins dynamics across sleep/wake transitions with unprecedented temporal resolution in the lateral hypothalamus and the basal forebrain. Early microdialysis studies could only obtain coarse measurements of orexin levels during sleep or wakefulness with a poor temporal resolution of minutes to hours, and thus could not unambiguously detect phasic changes in orexin release occurring during sleep phase transitions or short-lived sleep phases. In contrast, photometry recording of OxLight1 offers practically a real-time outlook on orexin release. To take advantage of this, we teamed up with the laboratory of Prof. Antoine Adamantidis, who was among the first to demonstrate the involvement of orexinergic neurons in the process of awakening from sleep. By combining photometry imaging of orexin dynamics and polysomnographic recordings to score the sleep status of the animal, we made the unexpected and interesting observation that a rapid drop in orexin levels occurs during REM sleep (Figure 2), which was subsequently blunted by the administration of the orexin receptor antagonist suvorexant.

Finally, owing to the spectral properties of the probe, we could study for the first time the spatiotemporal details of orexin signals using two-photon imaging. To do this we collaborated with the laboratory of Dr. Tommaso Fellin, an expert in two-photon microscopy at the Italian Institute of Technology. With his measurements, he revealed hitherto unknown orexin fluctuations occurring in the somatosensory cortex upon awakening from anesthesia.

Our hope is that the introduction of OxLight1 will pave the way for the development of new sensors for neuropeptides, of which there are hundreds, and aid future investigations on the mechanisms affecting the action of orexinergic signals on neural circuits.

We would like to thank all our funders for making this research possible, among others the European Research Council (ERC) and the Swiss National Science Foundation (SNSF). 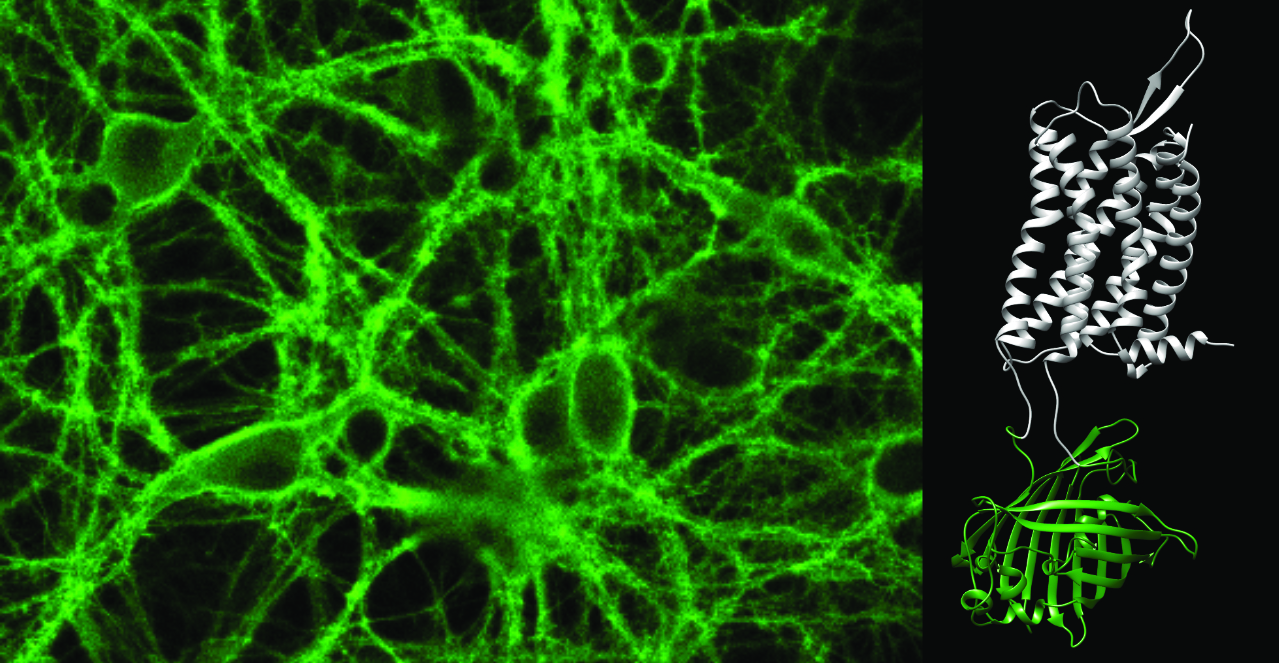 Sneak-peek into the hidden world of neuropeptides: a genetically encoded biosensor for orexins

Neuropeptides play fundamental roles in modulating cellular and circuit functions within the brain, yet we know very little detail about the spatiotemporal aspects of their release. Our new fluorescent orexin biosensor allows us to shine light on these important molecules directly in living animals.