Cardiovascular disease is a major threat to human health and has surpassed cancer as the leading cause of death in today's society. Continuous and non-invasive monitoring and diagnosing of such diseases is critical, particularly for high-risk groups such as the elderly and obese people. However, unlike collecting biological information on the body's surface, the heart and major blood vessels are hidden deep beneath the skin, posing significant challenges to traditional wearable devices. Specifically, as the body's main protective layer, the skin will isolate most of the influence of the external environment and significantly attenuate the incoming and outgoing signals from the body. Furthermore, the object dimension ranges from decimeters to micrometers. Consequently, measurement strategies must have both sufficient penetrative depth and a high spatial resolution for capturing biological parameters in the deep tissues of interest. In our recent work (https://www.nature.com/articles/s41551-021-00763-4), we report a conformal and skin-integrated ultrasound patch that is capable of measuring key physiological signals from the heart and vessels up to 14 cm beneath the skin. Based on this ultrasound patch, the heart beating and erythrocyte movement have been accurately monitored, which has essential medical significance for the diagnosis and prevention of cardiovascular diseases.

To ensure high resolution while collecting signals deep into the body, we use the phased array control technology on each element for transmitting and receiving beamforming. Compared to the ultrasound beam produced by the synthetic aperture technique using an unfocused single transducer, the resulting steerable focused ultrasonic beam intensity is 267 times higher. This not only allows ultrasound signals to detect targets in deep tissues but also enhances the signal-to-noise ratio (SNR) of the acquired reflection signals significantly. 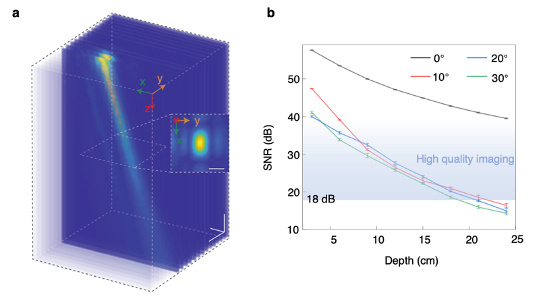 The idea of monitoring cardiovascular signals using an ultrasound phased array patch arose from basic ultrasound patch research conducted by our group. We first used a similar transducer array to reconstruct 3D images on the flat, concave, and convex surfaces1. After discovering its excellent ability to detect long-distance targets, we gradually began to investigate its applications in the biomedical engineering field. The first work we have done was using the transducer array to monitor blood pressure2,3. Since the array does not use phased array technology, each array element sends and receives ultrasound signals independently. Through this non-focused transducer array, we have collected blood pressure fidelity waveforms across the body (e.g., neck, arm, wrist, foot).

In this work, one of the most critical issues is to consider phased array beamforming on curved surfaces such as the chest and neck. When a stretchable device deforms due to human movement, each element shifts from its normal position, causing deviations in the acoustic interference and thus the beam output. Although auto-correction methods can measure each element's location and minimize phase aberration, the dynamic movement of the curvilinear human skin presents significant challenges for accurate real-time tracking of transducer coordinates. Here we choose a relatively low frequency of 2 MHz because it has sufficient axial resolution and reflection intensity from small objects. Most importantly, element positional shifts are negligible in comparison to the relatively long wavelength, which reduces the sensitivity of the beam output to device deformation in all directions. Furthermore, the multi-pulse excitation allows for a higher probability of interference, which further minimizes the sensitivity of the beamforming to device deformation.

In conclusion, the reported stretchable array prototype expands the sensing range of existing stretchable electronics considerably, and it is not limited to areas just under the device but enlarged into a much wider window. The device has high SNR and maintains the high-resolution capability for sensing groups of microscale objects due to the phased array beamforming. Deep tissue targets can be extended and not only be limited by those studied in this study but also provide a critical capability for the monitoring of infusion and continuous monitoring of the risky organ in patients. However, there are still technical challenges before this preliminary prototype is deployed to other general environments. The front-end sensor, for instance, still needs wired data outputs for processing in the backend acquisition system. The transducer array also requires a high-voltage power source. Our future plan is to integrate the sensors with a state-of-the-art flexible polymer battery, onboard signal preconditioning, and also wireless data transmission. With those components integration, we will move one step closer to creating sophisticated healthcare devices and making a tremendous leap in the monitoring and diagnosing of cardiovascular diseases. 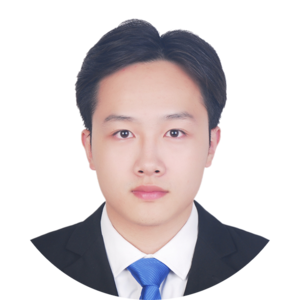