The Characteristics of Patents Impacting Availability of Biosimilars

The large number of biologic drug patents in the United States has contributed to delays in biosimilar availability.
Victor Van de Wiele and Ameet Sarpatwari
2 contributors
Like Liked by Evelina Satkevic
0

The characteristics of patents impacting availability of biosimilars - Nature Biotechnology

The large number of biologic drug patents in the United States has contributed to delays in biosimilar availability.

High US expenditures on prescription drugs have been fuelled by expensive biologics drugs, including monoclonal antibodies and gene therapies. To address the effect of high prices on payers and patients, Congress enacted the Biologics Price Competition and Innovation Act (BPCIA) as part of the 2010 Patient Protection and Affordable Care Act. The legislation introduced an abbreviated pathway for biosimilars—versions of US Food and Drug Administration (FDA)-approved “originator” biologics made by different manufacturers—and a procedure to resolve patents disputes arising from a new biosimilar approval. It was hoped this pathway would achieve comparable success to the generic approval pathway for small-molecule drugs created under the 1984 Hatch-Waxman Act, which saved the US health care system over $1 trillion in the past decade alone. (1) As of January 2022, however, only 33 biosimilars have been approved by the FDA, (2) of which 21 have been marketed. (3) In the Europe Union (EU), by contrast, 65 biosimilars had been approved. (4) Of these approved bioisimilars, 48 were marketed in France. (5) This discrepancy prompted our team to investigate possible reasons for slower US biosimilar market growth. In addition to studying regulatory barriers, such as pre-approval testing requirements (6,7) we examined BPCIA-related patent litigation between the Act’s enactment and August 2020. (8) We found that biosimilar growth has been characterized by biosimilar manufacturers choosing not to use the complex litigation process established by the BPCIA and by the large number of patents (“patent thicket”) protecting each originator biologic. Many biosimilar patent litigation cases ended in to settlement agreements that delayed availability.

In our study published in the January 2022 issue of Nature Biotechnology (9), we examined the characteristics of the patents at issue in these cases. By assessing their filing and issue dates, type of claimed invention, and original assignees, as well as whether similar patents existed in comparable countries, we sought to understand which patents served as barriers to biosimilar entry and whether they were filed only in the US.

We examined 179 patents covering 21 cases involving 9 originator biologics: adalimumab (Humira), bevacizumab (Avastin), epoetin alfa (Epogen), etanercept (Enbrel), filgrastim (Neupogen), infliximab (Remicade), pegfilgrastim (Neulasta), rituximab (Rituxan), and trastuzumab (Herceptin). Only 11 (6%) patents covered an active ingredient in a biologic drug, while most covered uses or peripheral features of the drug, such as its manufacturing process (N=76, 42%) or formulation (N=43, 24%) (Figure 1). The median time of patent filing was over a decade after approval of the originator biologic (Figure 2).

That most litigated patents covered new methods of manufacturing and formulations that may have offered minimal-to-no additional benefits to patients and were filed long after FDA approval raises concern over anticompetitive behavior. To compete effectively, biosimilar manufacturers would have needed to show that their products were highly similar to the originator biologic made via the new manufacturing process or contained in the new formulation. By complicating this task, the “secondary” patents comprising the patent thickets effectively extended originator biologic market exclusivity well beyond the 12-year statutory exclusivity period provided by the BPCIA.

Finally, we found that one-fifth of the patents had no equivalents—either patents or patent applications—in the EU, Canada, or Japan. While patenting standards may be similar across the jurisdictions, their application likely differs. Indeed, some commentators have criticized the US Patent and Trademark Office (USPTO) for being too lax in approving patents. (9)

Based on these findings, what can be done to promote more robust and timely US biosimilar competition? Passing federal legislation is difficult even in the best of times. However, there is bipartisan agreement on the need to reduce the impact of late-filed patents on biosimilar competition. The Affordable Prescriptions for Patients Act, introduced by Senators John Cornyn (R-TX) and Martha Roby (R-AL) in July 2019, would allow a maximum of 20 patents covering the biologic or a method or product used in its manufacturing and having either a filing date more than 4 years after FDA approval of the originator biologic or a manufacturing process claim not used by the originator manufacturer to be asserted in infringement proceedings. The Congressional Budget Office estimated that the Act would save $507 million over ten years. (10)

Independent of legislation, US patent examiners could be given more time to scrutinize patent applications. Wasserman and Frakes reported that a 50% increase in examination time was associated with a 10% decrease in the issuance of invalid secondary patents. (11) Tu argues that it is more important to invest in examiner and applicant interviews to help bridge the gap between misunderstandings of prior art, the invention, or statements in the specification. (12) In a recent Nature Biotechnology article, (13) Rai and Price recommend that for patents with manufacturing process claims, the FDA could share chemistry, manufacturing, and control information submitted by originator manufacturers to the USPTO. Such sharing would help determine if originator manufacturers were using manufacturing methods claimed in patent applications more than a year prior to submission—an automatic bar to patenting—while also fulfilling a Biden Administration goal of fostering greater collaboration between the FDA and the USPTO to address high drug prices. (14)

Secondary patents with filing dates ten years after originator approval and for which one-fifth of patents did not have equivalents in other jurisdictions constituted a key hurdle to biosimilar market entry. Based on our findings, we suggest lawmakers limit biologic patent enforceability, increase USPTO examiner time and resources, and promote greater collaboration between the FDA and USPTO to ensure timely access to more affordable treatments. 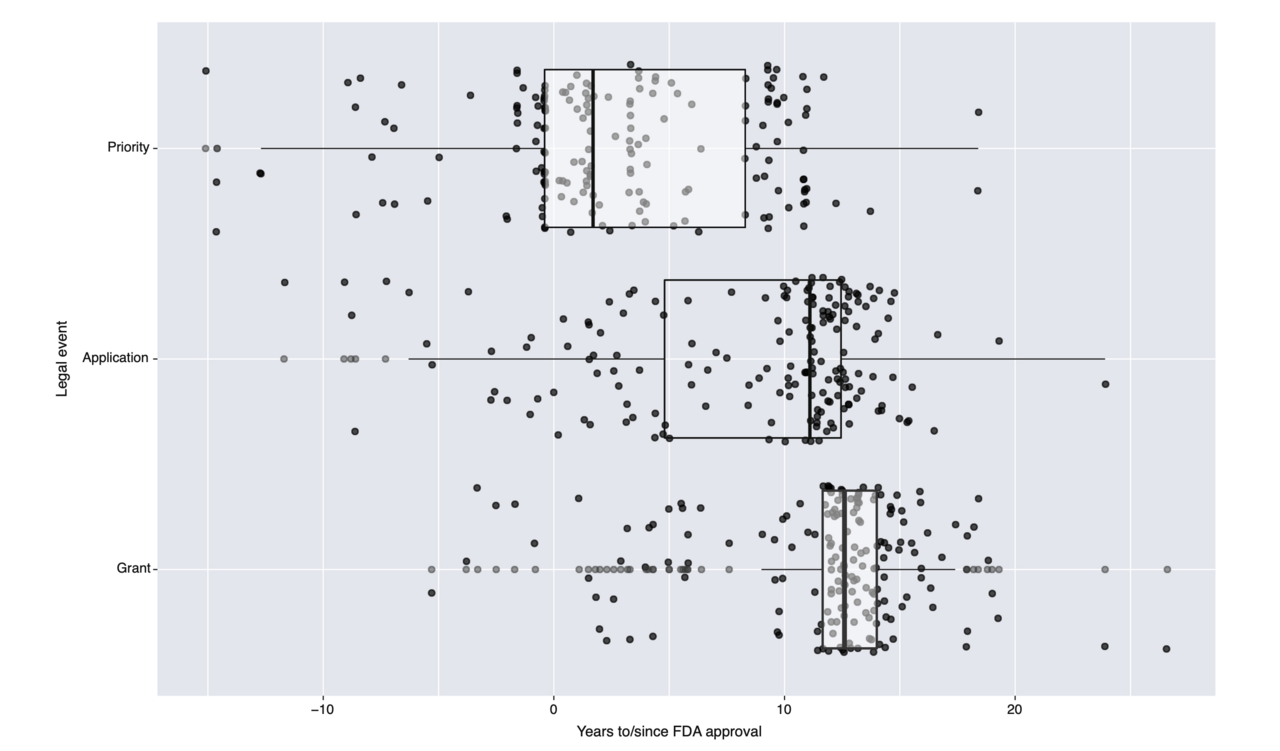 The Characteristics of Patents Impacting Availability of Biosimilars

The large number of biologic drug patents in the United States has contributed to delays in biosimilar availability.