The T-cell response to tuberculosis is examined by clustering T-cell receptor sequences to identify shared specificities, along with whole-genome antigen screening.

Immunologic memory is a critical feature of our adaptive immunity. It means that the immune system can remember the antigens that it previously encounters and launch a more robust immune reaction when encountering the same antigen a second time, which is the basis of vaccination. The major players of adaptive immunity are B cells that present antigen and produce antibodies, CD8+ cytotoxic T cells that directly destroy infected cells or tumor, and CD4+ helper T cells that regulate CD8+ T-cell and B-cell function. To define a protective memory response either after recovery from an infection or post-vaccination, researchers usually look for correlates with increased memory B-cell or T-cell frequencies. Whereas antibody titers have been formally demonstrated as conferring vaccine-induced protection against many diseases, such as tetanus, measles, hepatitis and varicella, antigen-specific T-cell responses have not been comprehensively characterized due to the complexity of various T-cell effector functions and almost limitless antigen specificities. This further hinders the vaccine development for Tuberculosis, HIV, malaria and tumor, where pieces of evidence indicate that a robust T-cell response is indispensable. Thus, there is a growing interest in developing strategies for a sensitive and specific analysis of antigen-specific T-cell response against a pathogen or a tumor type.

Historically, T-cell proliferation assay using thymidine [3H] labelling after antigenic stimulation is used for monitoring antigen-specific T-cell responses. More recent approaches include the use of cytoplasmic dyes, such as CFSE, to track lymphocyte proliferation. The disadvantage of these assays is the long-time incubation (one to two weeks) required for proliferation detection and subsequently, impaired cell phenotype after in vitro manipulation. ELISPOT (enzyme-linked immunospot) and intracellular cytokine staining (ICS) are also widely used assays for the detection of antigen-specific T cells, but it is limited to one or a few known effector cytokines to measure at a time. A significant improvement came when “tetramers”, developed by John D. Altman and Mark M. Davis, have emerged as a key tool for elucidation of the frequency of antigen-specific T cells in vitro, particularly in viral infections and post-vaccinations1. Notably, the recent development of combinatorial labeling and DNA barcode schemes allows hundreds to thousands of tetramers to be tested at once2-6. Besides ICS and tetramers, other approaches have been reported to use flow cytometry to identify antigen-specific T cells, including cell surface trapping of cytokines and the use of activation markers after antigenic stimulation.

When we started analyzing T-cell protection in Tuberculosis patients from South Africa, we immediately realized that none of the above methods is perfect to broadly capture the Mycobacterium tuberculosis (Mtb)-specific T-cell repertoire. Several reasons, first, the Mtb has one of the largest pathogen genomes (4.4 Mb) and more than 3000 genes, so it is impractical to use synthesized peptides as antigens to cover the whole proteome. Second, the HLA alleles from this South Africa cohort are so variant that there is no dominant one to be representative of the cohort and serve as a candidate for tetramer. Third, different T-cell subtypes might be involved in the protection against Mtb, without a single cytokine or a single parameter to lean on. To overcome these challenges, we developed this two-pronged strategy to both broadly analyze the CD4+ T-cell response to Mtb in the T cells from latently infected individuals, and to develop a way to identify specific CD4+ T-cell antigens that emerge from the analysis.

The first prong is to identify Mtb-specific T cells from PBMCs using T-cell activation marker—CD154 after stimulation with the whole Mtb lysate and then run single-cell analysis. In principle, this covers the broadest antigen spectrum from the bacteria. To better understand a large amount of T-cell receptors (TCRs) identified, we previously developed an algorithm GLIPH that can cluster TCR sequences sharing the same specificity according to sequence similarity, predict the HLA restriction of these TCR clusters based on the genotypes of subjects who produced them, and thus facilitate the antigen discovery7. Here, we developed an updated version, namely GLIPH2, which can analyze up to millions of TCR sequences with much higher speed, accuracy and efficacy. Usually, the clonal expansion analysis by counting how many TCR repeats from each individual allows one to focus on T-cell dynamics in a single individual. Complementary to this, the GLIPH2 analysis allows us to focus on shared specificities among individuals from a whole cohort perspective, which is ideal for discovering vaccine candidates.

The second prong of our approach is the development of an efficient method to screen the entire genome of Mtb for CD4+ T-cell epitopes of interest. Notably, several advantages have been shown on our platform. First, unlike mouse studies with unlimited access to primary APCs restricted by only a few MHC alleles, human studies involve more than twenty thousand variant HLA alleles and access to primary human blood cells is not always feasible. The K562 cell line stably expressing CD80 and HLA-DM serves as a robust artificial APC (aAPC) and provides an efficient method to screen protein antigens for any given TCR. Second, the aAPC can naturally process and present peptide antigen through the endogenous class II antigen processing pathway, which enabled us to discover the discrepancy between protein and peptide stimulation. Third, throughout the study, TCR activation was used to capture antigen-specific T cells and discover antigens, thus it can capture peptides with low TCR binding affinity, which might be missed by assays relying on strong binding affinities. Fourth, our reporter system uses EC50’s to measure TCR and peptide MHC interactions. Such quantitative measurements will help identify the most immunogenic consensus antigens, as well as the TCRs that recognize them.

Taken together, we have established a strategy that combines pathogen-specific CD4+ T-cell repertoire analysis and antigen discovery, and successfully decoded the T-cell response to a complex and serious pathogen with a large genome, Mtb. This platform could be easily adapted to study other disease-related T-cell responses such as Malaria, tumor and autoimmune disease. 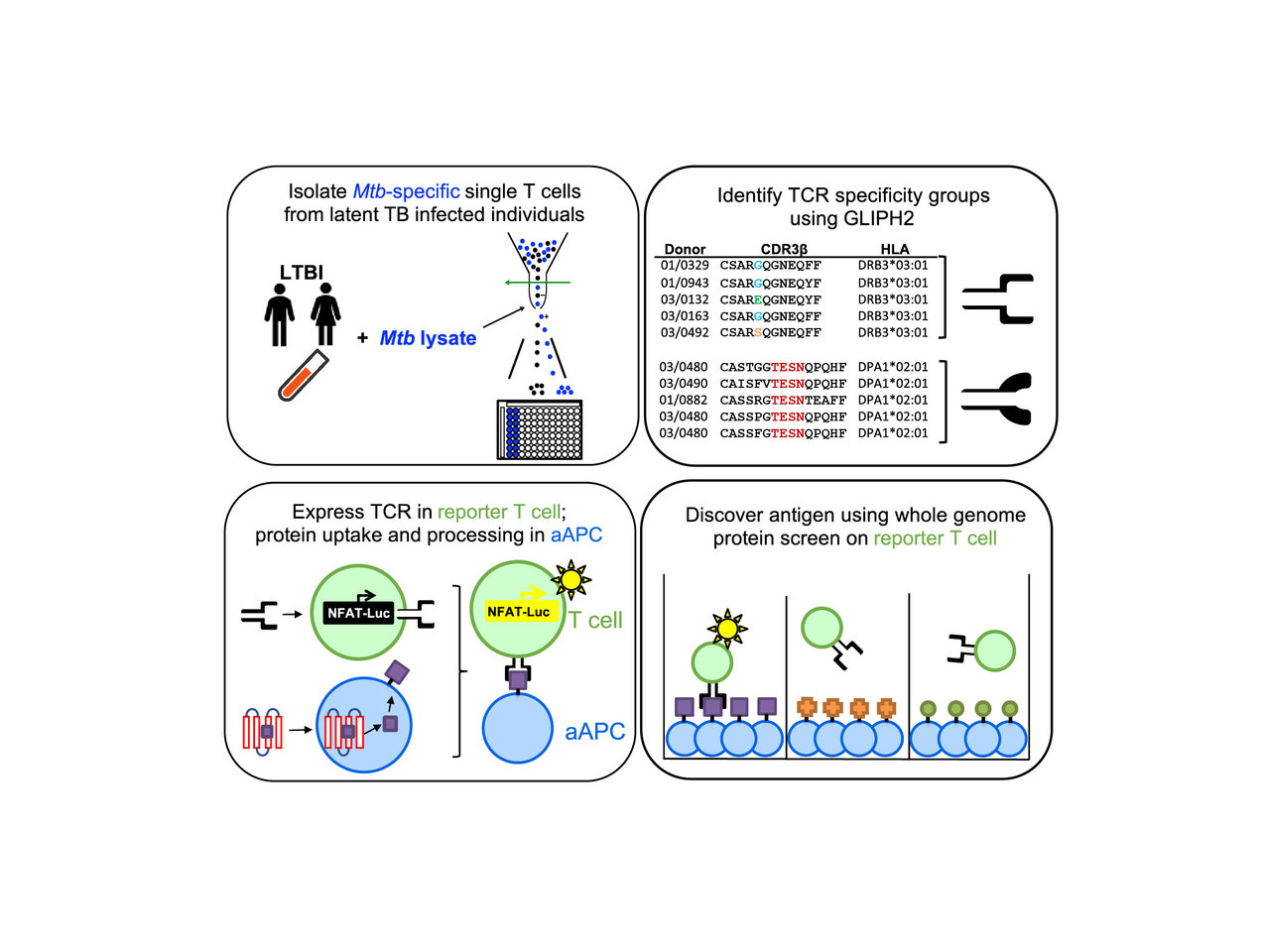