The Central Dogma posits that DNA is transcribed into mRNA and then the mRNA is translated into proteins. Once made, proteins undergo a variety of post-translational modifications (PTMs) that can diversify or modulate protein function as well as trigger the removal of the protein. For many years, we have been studying one such PTM, i.e. the citrullination of arginine, which involves the hydrolysis of the guanidium side chain of an arginine. This reaction is catalyzed by the Protein Arginine Deiminases (PAD1-4).1

From a biomedical perspective, the PADs are interesting because protein hypercitrullination is a hallmark of multiple autoimmune diseases, including rheumatoid arthritis (RA), ulcerative colitis, lupus and certain cancers. Notably, PAD inhibitors ameliorate symptoms in preclinical models of all these diseases.  Thus, the biomedical relevance of the PADs is high, and several pharmaceutical companies are focused on developing PAD inhibitors as therapeutics for these diseases.

While the importance of this PTM to human physiology is high, we still lack a detailed understanding of which citrullination events contribute to human cell signalling and how citrullination events alter protein function at the molecular level.  This is due, in part, to the difficulty of accessing citrullinated proteins homogeneously modified at a specific site in living cells. To address this challenge, we developed a technique that enables incorporation of citrulline into proteins at a predefined site in mammalian cells.

Schematic representation of site-specific incorporation of citrulline into proteins.

Protein biosynthesis involves a cascade of biochemical reactions and the key players in this process are aminoacyl-tRNA synthetases (aaRSs), tRNA, and mRNA. Each natural amino acid has its own synthetase which charges a cognate tRNA. The charged tRNA then recognizes a three-nucleotide sequence (or codon) on a protein encoding mRNA and the ribosome incorporates the amino acid into the growing protein. This process continues until one of three stop codons (UAA, UGA and UAG) is reached.

Genetic code expansion (GCE) technologies exploit these stop codons (usually the amber codon UAG) to incorporate unnatural amino acids (UAAs) into proteins.2,3 This technology relies on an engineered synthetase that can charge a tRNA with the UAA of interest.  The UAA is then incorporated into a target protein at a predefined position marked by a stop codon.  To date, engineered tRNA-synthetase pairs have been developed for numerous post-translational modifications, particularly of lysine, but until now it was not possible to incorporate citrulline into proteins in a cell – in vitro translation systems and post-translational methods have been described but these have several limitations and cannot be readily used in mammalian cells.

To incorporate a citrulline, the key challenge is that it is similar in size and shape to arginine.  As such, here are few molecular determinants that can be exploited to develop an engineered synthetase that selectively incorporates citrulline.  Chatting with co-author Abhishek Chatterjee at the Bioorganic Gordon conference, we considered that the addition of a bulky group (that could be selectively deprotected) might make it possible to incorporate a citrulline into a protein.  To that end, Santanu developed two analogues, SM58 and SM60, that can be post-translationally converted into citrulline using either a Pd-catalyst or 365 nm light. Screening of these compounds against various engineered aaRS/tRNA pairs identified an E. coli-derived leucyl-tRNA synthetase (EcLeuRS)/leucyl-tRNA (tRNACUA) pair4 suitable for robust expression of citrullinated proteins in mammalian cells (see figure). We used SM60 for further studies owing to the high spatiotemporal control of photochemical conversions. Using this technique, we incorporated Cit at two known autocitrullination sites, R372 and R374 of PAD4 and biochemically characterized their effects on PAD4 activity.

Given the physiological and pathophysiological roles of citrullination, this platform for the site-specific incorporation of citrulline into proteins possesses immense potential to decipher the downstream implications and biology of this PTM and we look forward to it use by us and others. 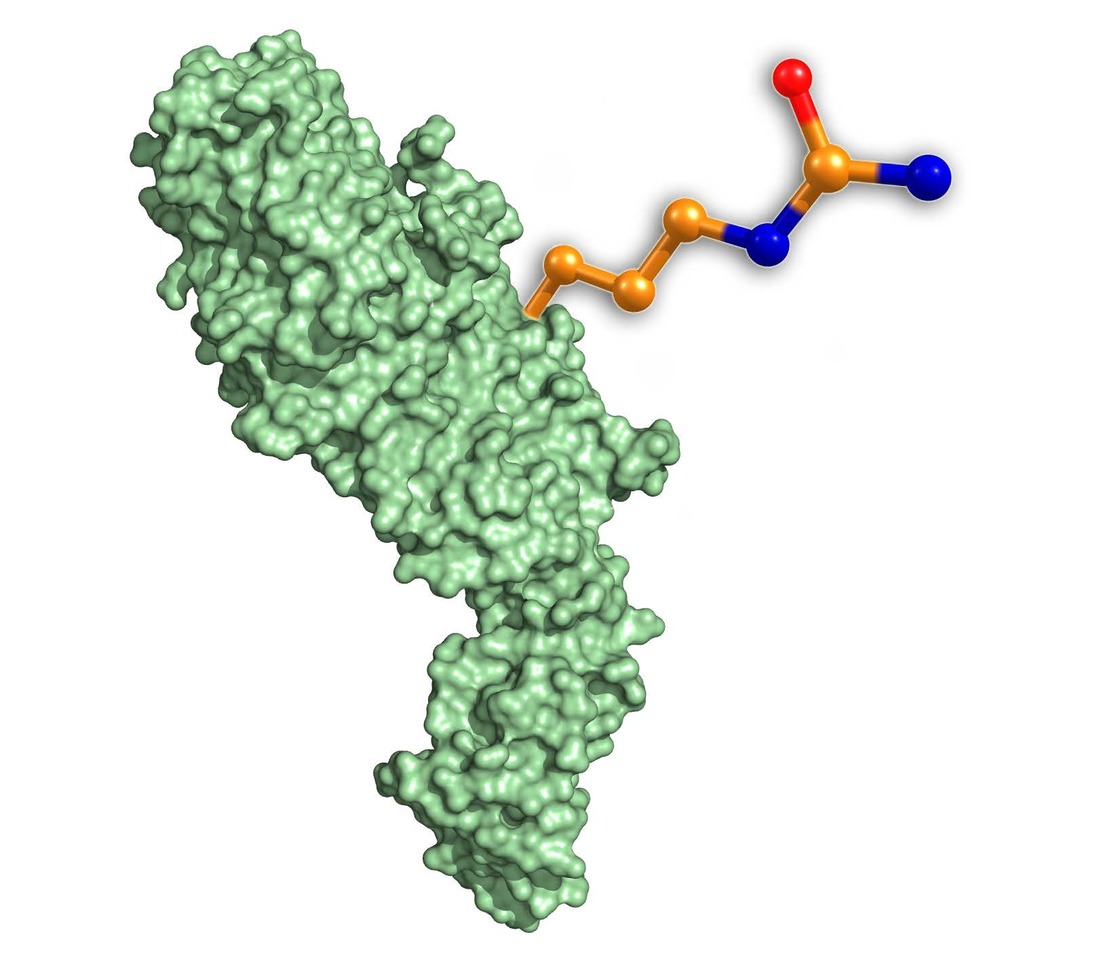 Development of methods to site-specifically incorporate the amino acid citrulline into proteins.