The components of m6A writer complex and their interactions are still far from fully understood. Here, we identify two HAKAI-interacting zinc finger proteins, HIZ1 and HIZ2, as components of m6A writer complex, and show that hiz2 mutants have an 85% m6A reduction and severe developmental defects.
Mi Zhang
Research fellow, The University of Nottingham
Follow
Like Liked by Evelina Satkevic and 1 other
0

The components of m6A writer and their interactions are still far from fully understood. Here, the authors identify two HAKAI-interacting zinc finger proteins, HIZ1 and HIZ2, as components of the Arabidopsis m6A writer complex, and show that hiz2 mutant plants have an 85% reduction in m6A abundance…

N6-methyladenosine (m6A) is one of the most studied internal modifications in eukaryotic mRNAs and is necessary for the regulation of developmental and cell differentiation processes in most eukaryotes. Its deposition on the mRNAs is catalyzed by the methyltransferase complex (m6A writers). The m6A methylation can be removed by demethylases (m6A erasers) and recognized by m6A-binding proteins (m6A readers).

Rupert Fray’s group has been studying mRNA methylation since 2005, starting with the m6A writer complex, which is formed by an assembly of proteins that are conserved between plants and animals. Early in the 1990s, the main catalytic subunit MT-A70 (now known as METTL3) was identified. In 2008, Rupert’s group showed that mRNA methylation is required for normal development in a eukaryote (plant, but subsequently found to be true for most higher eukaryotes) and in the same publication the authors showed that the plant m6A methylase A (MTA, plant homolog of METTL3) interacted with Arabidopsis FIP37 (Zhong et al., 2008). These findings kick-started the whole epitranscriptomics field. WTAP (mammalian homolog of FIP37) was subsequently found to be one subunit of the m6A writer complex in mammals also. As the originally identified m6A writer complex in the 1990s is a quite large one (875 kDa), researchers have been endeavouring to uncover other proteins involved in m6A writing.

In 2014, I joined Rupert’s group as a PhD student. Before I started, Rupert’s group and Kamil Růžička, a collaborator in Czech Republic, had identified MTB (mammalian homolog METTL14), VIRILIZER (VIR) and HAKAI as additional members of the Arabidopsis m6A writer complex, detailed in our New Phytologist paper published in 2017 (Růžička et al., 2017). My PhD program was focused on studying the function of HAKAI in mRNA methylation. We first generated HAKAI knockout mutants via CRISPR-Cas9 mutagenesis and found the knockout of HAKAI led to a 35% reduction in global m6A abundance but hakai mutants resemble the wild-type (WT). In comparison, null mutations of any of the other m6A writer proteins (MTA, MTB, FIP37, VIR) cause embryo lethality, and hypomorphic partial knockouts lead to ~85% m6A reduction and strong developmental defects. However, the double mutants between hakai and core complex members exhibit a much-enhanced phenotype, characteristic of more severe m6A deficiency, than the single core complex mutants alone, indicating an additive or synergistic effect of the mutations. These findings were included in our New Phytologist paper (Růžička et al., 2017). It was also the first time that HAKAI was shown as one component of the m6A writer complex. Subsequently, mammalian and Drosophila HAKAI were also reported as m6A writer complex members.

In this new paper, we further characterize the function of Arabidopsis HAKAI. Firstly, we generated GFP-tagged HAKAI transgenic lines complementing the hakai knockout mutant. This complementation line was then used for the study of HAKAI interacting proteins by in vivo crosslinking followed by anti-GFP co-immunoprecipitation and mass spectrometry. Major proteins co-purifying with HAKAI include the known m6A writer complex members  –  FIP37, VIR and MTA. We also discovered two zinc finger proteins, which we name HAKAI-interacting zinc finger protein 1 and 2 (HIZ1 and HIZ2), as HAKAI interacting partners. HIZ1 and HIZ2 were also found pulled down with GFP-tagged MTA protein, further indicating the involvement of them in plant m6A writer complex. Furthermore, we found that the knockout of HAKAI led to the disappearance of the interaction between MTA and HIZ1 whereas HIZ2 remained as an interacting partner with MTA.

Next we wanted to know the roles of HIZ1 and HIZ2 in regulating m6A mRNA modification. The Arabidopsis Information Resource (TAIR) database (https://www.arabidopsis.org/) shows that both HIZ1 and HIZ2 are annotated as zinc finger CCCH-domain containing proteins, however, their sequences share little homology. HIZ1 was characterized by using identified T-DNA insertion mutants and we also generated GFP-tagged HIZ1 transgenic lines either under its own promoter or the constitutive 35S promoter. The knockout of HIZ1 did not change the overall m6A level and the plants look normal while the overexpressor lines driven by the 35S promoter led to decreased m6A level by 24%. GFP-tagged HIZ1 under its own promoter was found expressed primarily in stem cell niche and the columella in the primary root tip. In contrast, hiz2 knockout mutants are viable but demonstrate strong developmental defects, including retarded growth, reduced apical dominance and small and bushy rosette leaves, which are similar to, but more severe than, the phenotypes of the major hypomorphic m6A writer mutants (Figure 1). The knockout of HIZ2 led to a decrease of 85% in the global m6A abundance. Together, this indicates that HIZ2 is an important component of the Arabidopsis m6A writer complex and it is potentially a core component of the finely tuned mechanism of mRNA m6A modification involved in Arabidopsis growth and development.

While studying the root phenotypes of our low m6A mutants, we noticed they demonstrate some auxin-insensitive phenotypes: including shorter primary roots and reduced number of lateral roots. In this study, we further investigated their responses to sequential treatment with auxin transport inhibitor N-1-naphthylphthalamic acid (NPA) and synthetic auxin 1-naphthaleneacetic acid (NAA). Reduced numbers of induced lateral roots were seen in all studied m6A writer mutans, most severe in vir, hiz2 and fip37 mutants. We also saw a similar change in the HIZ1 overexpressor line driven by 35S promoter. Interestingly, we observed that HIZ1-GFP lines (especially the one under its own promoter) demonstrate increased root hair density and lengths upon the NPA treatment. Consistently, increased HIZ1-GFP expression was seen in root hair cells upon the NPA treatment.

To uncover the transcripts that are methylated dependent on HAKAI and also to uncover the mechanism underlying the root development and other processes regulated by m6A modification, we carried out methylated RNA immunoprecipitation with next-generation sequencing (MeRIP-seq) on WT, hakai, fip37 and vir. The GO enrichment analysis showed some highly enriched terms associated with embryo development, root development, root hair development, etc., consistent with the observed phenotypic changes upon m6A deficiency.

In summary, our new paper uncovers two zinc finger proteins, HIZ1 and HIZ2, that are involved in m6A formation (Figure 2). HIZ2 is an essential member of the m6A writer complex required for full methylation of transcripts and is likely the long-sought plant equivalent of mammalian ZC3H13 (Drosophila Flacc). 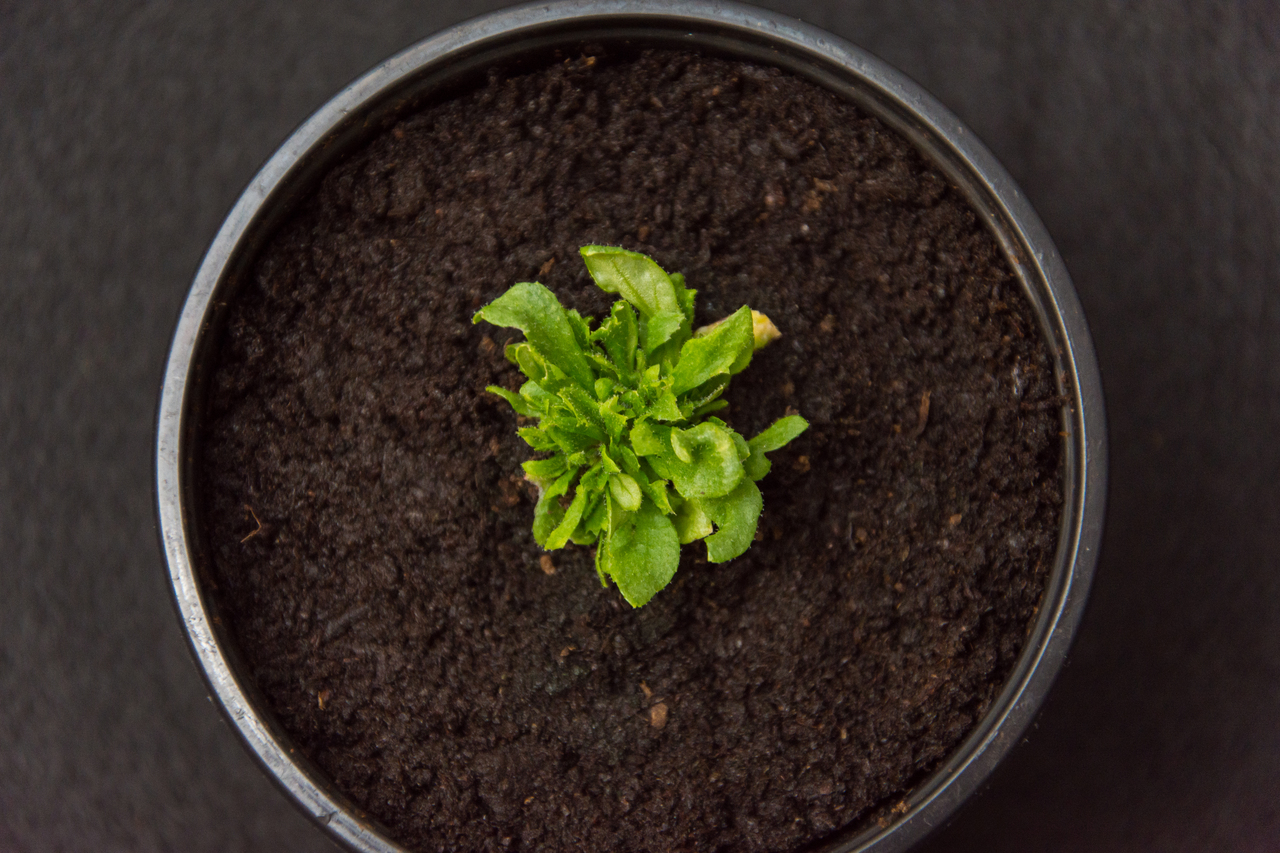