We found that the synthetic gene circuits could compete for the limited resources in a 'Winner-takes-all (WTA)' manner, which can be harnessed through a 'division of labor' strategy.

Many years ago, when I started my postdoc at Virginia Tech, I was fascinated by a biological process known as epithelial-to-mesenchymal transition (EMT), in which cells lose polarity and cell-cell adhesions to become more migratory and invasive. EMT is essential in embryonic development, tissue fibrosis, and cancer metastasis. We built the first mathematical model for EMT and predicted that EMT is not a binary process but has a partial state in between1. We proposed that EMT proceeds through stepwise activation of cascading bistable switches (CBS), which is governed by coupled positive feedback loops1. Later, we verified this prediction using quantitative experiments in the human cell line MCF10A2.

When I started my lab at Arizona State University in 2017,  I wanted to create synthetic CBS circuits that achieve similar successive cell fate transitions to further understand the design principle of CBS. We quickly came up with several designs with synthetic biological parts. One of these designs uses two self-activating modules, both of which work as bistable switches. Furthermore, they positively regulate each other so that if one is activated at some level, the other can also be activated. While this design is simple, the process to make it work in vivo is an adventure.

The first thing we needed to do is turn each module into a bistable switch. These simple modules could be a good start to our new lab. We tested the promoter strength and found that it is ultrasensitive, which is exactly what we wanted. We also measured gene expression using flow cytometry and observed clear bimodal distribution, which is a good sign of bistability. However, after several rounds of trials, we did not get the desired hysteresis curve showing that the final steady state depends on the initial state. That is, the circuit lost its memory at some point. We then analyzed the dynamics of the system and found the memory loss was due to host cell growth. As a matter of fact, growth feedback between the gene circuit and host cell was present but had not been included in the circuit design. The circuit gene expression caused a burden to the host cell, while the host cell division then diluted the gene expression. Indeed, after we used the conditioned medium from the stationary phase in which the cell growth stopped, the memory was maintained very well. Thus, the circuit was proved to be a bistable switch. We then wondered if this was also true for the toggle switch. We tested the toggle switch with our protocols and found that it was very robust to growth feedback. To understand the underlying reason, we did theoretical analyses and found that the difference in response to growth feedback between the two circuits lies in their network topologies. The self-activation switch consists of one positive regulation, while the toggle switch is made from two negative regulations. The dilution of the circuit products at the fast growth phase significantly reduced the gene activity of the positive regulation but barely affected the negative regulation. Thus, we concluded that the interference of synthetic gene circuit function by growth feedback depends on the network topology3.

With two bistable modules, we have now constructed one Syn-CBS circuit. We first place the entire Syn-CBS circuit in a single E. coli strain for testing. Interestingly, we found that the in vivo transition path was redirected as the activation of one switch always prevailed against the other4, contrary to the theoretically expected activation of one switch followed by coactivation of both switches. As it turns out, two hidden inhibitory regulations exist between the two modules as a result of the competition for limited resources in the host cell, which again was not included in our original circuit design. We found that resource competition between the two modules follows a 'winner-takes-all' rule, which is due to the self-activation nature of the two modules in the Syn-CBS system. It is noted that this is different from the reported linear resource competition in the system with two simple inducible genes5.

To illustrate the idea, consider the mechanical 'metaphor' shown in the above figure. The two buckets sitting at the ends of the seesaw (circuit modules) take up limited resources (blue arrows) from the bucket located at the center (shared resource pool in the host cell) through the pipes. The pipe diameters are depictions of the two modules' resource demand, which depends on their current expression level due to the nature of self-activation feedback. If the right bucket is leading the competition, it has a higher demand for resources, and thus tilts the seesaw toward its end. This leads to the recycling of the resources in the left bucket to the host bucket (red arrow). In the end, all the available resources go to the right bucket, leading to only one winner who takes all the resources.

To decouple the resource competition, we constructed a two-strain Syn-CBS circuit using a 'division of labor' strategy. Instead of placing the whole circuit in one single cell, we divided them into two separate cells. These two-strain circuits achieved successive activation and stable coactivation of the two switches4. Thus, the distribution of the resource-competing modules into microbial consortium is a good strategy to minimize unfavorable effects from resource competition.

All of these cellular context-dependent circuit-host interactions, including growth feedback and resource competition, have been seen as nuisances for a very long time. However, their importance is being noticed recently. A quantitative understanding of how the circuit-host interactions perturb the functions of gene circuits will enable us to control them and make our gene circuits more reliable in a real-world setting. 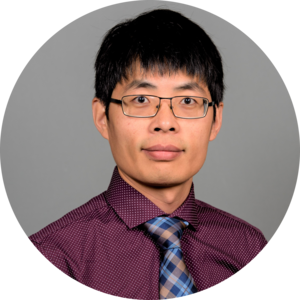