Bacterial motility may be used as an important predictor of whether a particular bacteria strain can develop AgNP resistance and could inform design of nanoenabled antimicrobials that mechanistically target specific types of bacteria.

In our recent paper published in Nature Nanotechnology, we set out to explore the mechanism of bacterial resistance to silver nanoparticles, including potential drivers such as particle aggregation and bacterial motility. In this pursuit, we borrowed methods developed for traditional antibiotics in the field of experimental evolution. Experimental evolution mimics how resistance develops in real-world systems, where bacteria are repeatedly exposed to and adapt to sublethal doses of the antimicrobial of interest. The quantitative metric to indicate that resistance is evolving is a minimum four-fold increase in the minimum inhibitory concentration (MIC, the lowest antimicrobial concentration that inhibits visible growth of the tested microorganisms). Maintenance of an increased MIC over several passages indicates that the increase is not simply due to fluctuations in metabolism. Based on the literature and conversations with experts, we learned that the typical timeframe for this change to occur is within twenty passages.

In our study, we observed a four-fold increase in the MIC for a hypermotile E. coli K-12 MG1655 (+IS1) strain exposed to silver nanoparticles after eight passages. This increase was maintained for the length of the experiment, twenty passages. The passage control – included to account for any changes in the bacterial populations that could arise from the repeated culturing – experienced no significant increase in MIC. Additionally, we monitored the silver nanoparticles over the duration of the experiments to ensure that resistance evolution was not attributable to changes in silver nanoparticle morphology or instability over time. The presence of stable, well-dispersed colloidal silver nanoparticles over five weeks was determined by monitoring particle size and localized surface plasmon resonance using transmission electron microscopy and ultraviolet-visible-near infrared spectroscopy, respectively. Further, exposure to ampicillin – an antibiotic known to induce resistance in E. coli – confirms that the increase in fold-change after repeated passaging is due to evolution of resistance. Finally, the silver nanoparticle pressure was removed after the repeated exposure period and re-introduced after four non-selective passages in growth media to test for reversibility of the resistant phenotype. Bacteria were still able to survive in the presence of a high concentration of silver nanoparticles after their removal with no reversion back to silver nanoparticle sensitivity.

To investigate the underlying genetic alterations associated with the observed heritable resistance, whole-population genome sequencing was carried out at the Microbial Genome Sequencing Centre. Our molecular analysis revealed a genetic mutation in cusS, a gene which encodes a sensory kinase associated with copper and silver ion efflux from the periplasm. Even though other mutations in cusS have been documented in the literature under repeated exposures to both silver nanoparticles and silver ions, these are located at different residues or in different domains altogether. Our observed mutation occurs within the active site of the phosphoacceptor region of the CusS protein and likely results in autophosphorylation of the CusS cytoplasmic domain, thereby prolonging the duration the efflux pump is activated. This suggests that resistance develops directly in response to the cell being able to pump silver out more efficiently. It is also important to note that since this mutation reached fixation (i.e., at 100% frequency) over several passages and was absent in the passage control, it is not likely to have occurred from genetic drift, another evolutionary force common in experimental evolution studies.

Another important finding from our study is that bacterial motility - how bacteria move around and interact in their surroundings, largely imparted by the flagellum - influences silver nanoparticle resistance. We compared the resistance profiles of two E. coli strains - one displaying hyper motility (imparted by an insertion element upstream of the flhD operon) and one being non-motile with no flagella or flagellin present (imparted by the absence of flhD, the master regulator of the flagella). In contrast to the hypermotile strain, there was no conclusive indication that resistance evolved in the non-motile E. coli K-12 JW1881 (ΔflhD::kan) strain. Our findings are promising for considering design of nano-enabled antimicrobials that target specific bacteria, particularly because several multidrug-resistant bacteria on the CDC’s urgent and serious threats list are non-motile (Clostridioides difficile, P. aeruginosa, Staphylococcus aureus, and various types of Acinetobacter and Streptococci). Our findings also direct future research to uncover currently unrealized, more detailed mechanisms of resistance related to bacterial motility (for example, physical distancing or relocating away from the silver nanoparticles to reduce exposure or increase nutrient availability).

On a final note, replication in experimental evolution is an important factor to consider in the design of future experiments. Evolution of resistance is stochastic, or randomly determined by fitness epistasis (that is, genetic variation within bacterial populations), such that evolutionary adaptation may not impart the same phenotype or involve the same genes in different bacterial populations. Multiple mechanisms and levels of resistance are therefore possible upon exposure to silver nanoparticles depending on the evolutionary path that a bacterial population takes to get there. Thus, there are numerous questions that remain for our future work, specifically related to developing more high-throughput methods to evaluate resistance to silver nanoparticles with enhanced replication for further understanding the impact and frequency of different mutations arising in different populations. 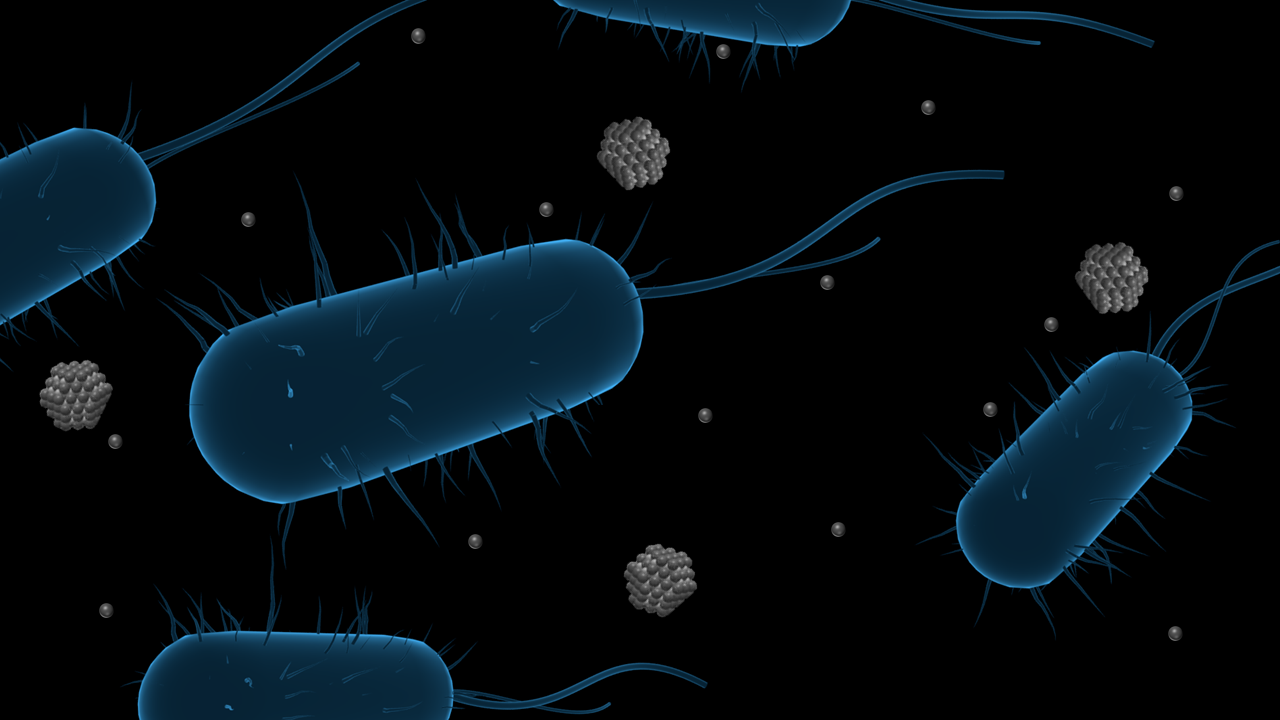