We recently showed that silver nanoparticles bind to and enter human cells, and, undergo cell-induced chemical transformations depending on their primary size and surface properties. This knowledge increases our ability to predict the cellular activity, toxicity and fate of engineered nanoparticles.
Angela Ivask
Professor, University of Tartu
Follow
Like Liked by Sciker
0

Humans are constantly exposed to a multitude of nanometer-sized particles (nanoparticles); that is particles with dimensions between 1 and 100 nanometers, nm. Some of those particles are natural but some are specifically designed to express certain functionalities. Indeed, it is the unique properties of nanoparticles, such as their increased reactivity and functionality compared to the bulk material, which has led to their widespread use. These properties also result in increased biological activity, whereby nanoparticles can penetrate cells and subcellular structures. Despite the many practical applications of nanoparticles, our current understanding of the nanoparticle-cell interaction is far from complete. This is because most studies investigating the interactions between nanoparticles and cells usually report the effects of nanoparticles on cell physiology, e.g. toxicity, or the concentration of cell-attached nanoparticles. While such studies provide important insights, they are usually performed on cell populations rather than single cells due to insufficient discrimination power of the methods at single cell level. Therefore, we set out to develop a method capable of investigating the interaction between nanoparticles and individual cells.

Our team at the Future Industries Institute of the University of South Australia including Enzo Lombi, Nicolas Voelcker, Anzhela Malysheva, Casey Doolette and myself started its studies on the cellular effects of nanosilver – one of the most commonly used nanoparticles in consumer products – several years ago when we used cells from human blood to create single cell level assays to observe the effects of nanosilver.  Nanosilver particles, being already frequently used in consumer products, are therefore likely to  interact with human tissues and cells and thus, have potential to also “meet”  blood cells. Our first success was the establishment of a single cell level lab-on-a-chip method that allowed us to assess the genotoxicity of nanomaterials. We then analysed the single cell level attachment of nanosilver to blood cells using imaging flow cytometry which being a purely visual technique, resulted only in qualitative estimation of cell-associated silver particles.

The next step was to quantify the number of nanoparticles taken up by single cells, or attached to the cell surface. Only a few methodologies can be used for quantitative single cell level analysis of nanoparticles and in case of metal-based nanoparticles, almost most of them rely on mass spectrometry analysis. In our study published in Nature Nanotechnology, we combined inductively-coupled plasma mass spectrometry in combination with mass cytometry, a hybrid of flow cytometry and mass spectrometry, to directly analyse elemental composition at the single cell level. Furthermore, to distinguish between the cell surface associated nanoparticles and nanoparticles present in intracellular space and estimate the quantity of silver that was associated with the cell surface or was present in the intracellular space at each nanosilver exposure concentration, we applied a cell surface "washing" or "etching" procedure. Using the combination of these methods we were able to calculate that for example, when one human white blood cell was exposed to 2500 particles of 60 nm sized nanosilver which surface was functionalized with positively charged chemical groups, 15% of the particles attached to the cell surface and 9% were taken up by the cell. When a similar exposure was performed with the 60 nm sized nanosilver particles surface-functionalized with negatively charged chemical groups, only 1.7% of the particles attached to the cell surface and 0.35% were intracellularized. In addition, as we demonstrated, adverse physiological effects were only caused by those nanosilver particles that were internalized by the cells.

By that we had quantitatively demonstrated the amount of nanosilver that was capable of surface binding and intracellularization when exposed to human white blood cells. However, we had no information whether the cell-associated silver was in it´s original nanoparticulate form or had been transformed during the process. Using single-particle mass spectrometry that enables mass-based size analysis of elemental nanoparticles related with each single cell, we were able to show that silver-containing nanoparticles of similar size to those we used in the original exposures were present in cell surface and in intracellular space. Interestingly, we also detected smaller and larger particles suggesting that nanosilver particles undergo certain changes during or after cellular binding or intracellularization.

In summary, based on our single cell level studies of nanoparticle-cell interactions we have been able to elucidate three basic processes that take place when human cells “meet” nanosilver particles. First, the extent of cellular binding and uptake is mainly driven by the surface properties of the nanoparticles: there can be 10-20-times difference in the cellular binding and uptake of nanoparticles depending on the surface properties of the nanoparticles. Second, it is only the intracellularized fraction of nanosilver that exhibits cellular toxicity. And, third, a significant fraction of nanosilver particles are transformed upon their cellular binding and uptake. The preferred transformation pathway is sulfidation which occurs with higher efficacy in the case of smaller nanosilver particles and gets accelerated after cellular uptake. We believe that our findings on nanoparticle-cellular interaction and transformation enhance the ability to accurately predict the biological activity and potential toxicity of nanoformulations. 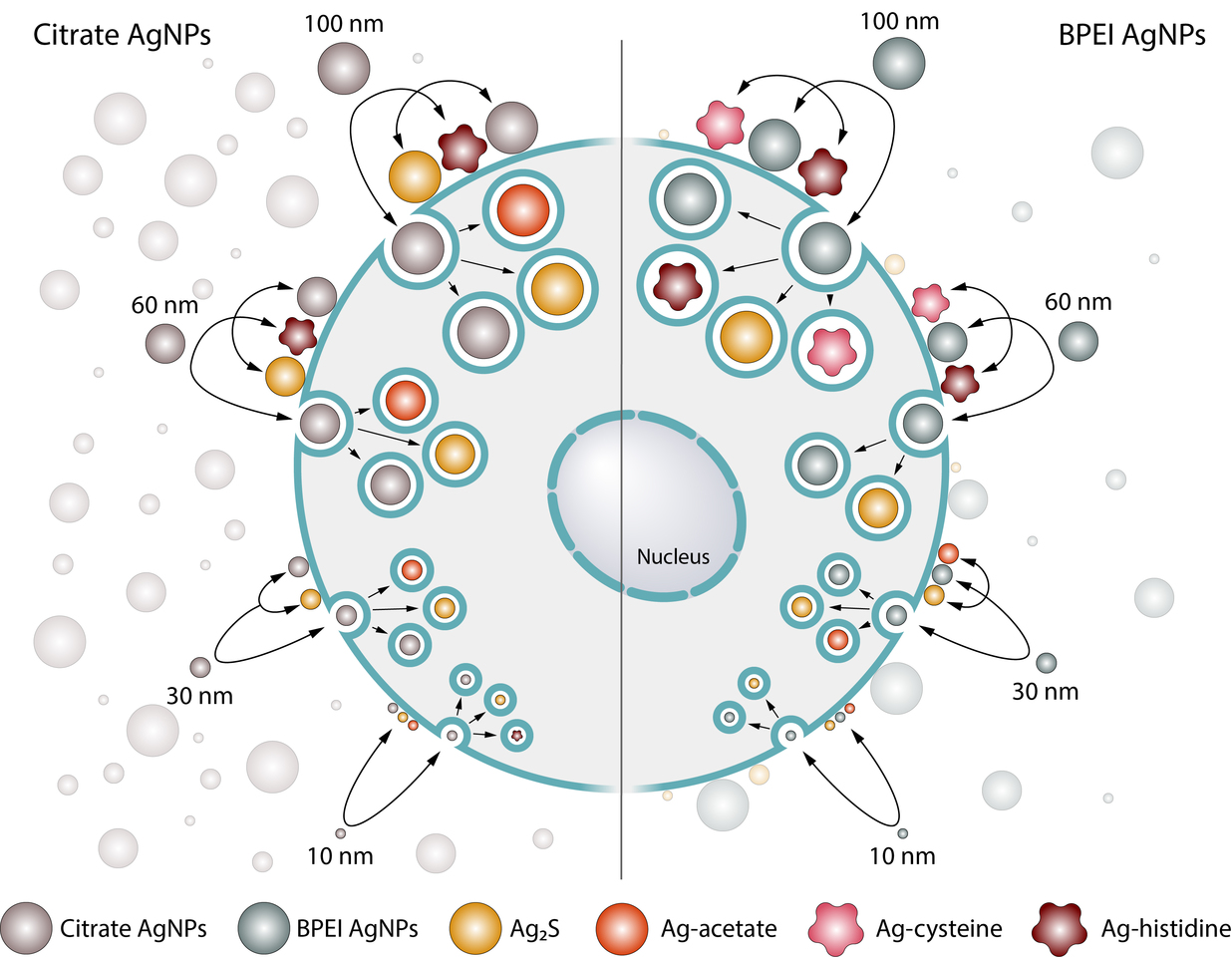 We recently showed that silver nanoparticles bind to and enter human cells, and, undergo cell-induced chemical transformations depending on their primary size and surface properties. This knowledge increases our ability to predict the cellular activity, toxicity and fate of engineered nanoparticles.