Systemically administered piezoelectric nanoparticles producing nitric oxide and generating direct current under high-intensity focused ultrasound can be used to stimulate deep tissue in the brain, as shown in a mouse model of Parkinson’s disease.

Neurodegenerative diseases are neurological disorders that are characterized by progressive degeneration of the structure and function of the central nervous system. These diseases cause involuntary movement, cognitive impairment, and memory problems. As a therapeutic method, deep brain stimulation is one of the most effective clinical treatments in the alleviation of neurological symptoms. This electrically stimulates the nervous system with chronically implanted electrodes to alter the pattern of electrical signals in neural circuits and induce neurotransmitter release in the efferent target neurons. However, its applicability is constrained by side effects (as with any brain surgery) resulting from the electrode insertion into the brain. Therefore, a neural stimulating strategy that is on-demand, non-invasive, and wireless is highly needed for the clinical treatment of neuronal disorders.

Piezoelectric materials generate direct-current output on mechanical deformation under physical stimuli such as ultrasound. Accordingly, it has been postulated that the combination of focused ultrasound and piezoelectric nanomaterials can facilitate the electrical stimulation of localized neurons in a non-invasive manner. However, the blood-brain barrier (BBB), a highly selective membrane barrier in the central nervous system, has limited the systemic delivery of therapeutic agents, including piezoelectric nanomaterials, deep inside the brain. Hence, the development of an efficient strategy for the modulation of BBB opening is central to maximizing the delivery of nanoparticles to brain parenchyma.

Nitric oxide (NO) is an endogenous gas molecule that plays essential roles in the modulation of various biological functions. Recent studies have revealed the potential of NO for BBB disruption, although its mechanism has not been clearly demonstrated. Based on the BBB opening effects of NO, our group expected that the NO release under a certain stimulus can allow a site-specific transient BBB opening and accumulation of the blood-circulating nanoparticles into a specific target area. In particular, our group has contributed to the development of polymer-based NO-delivery systems over the past decade.

In this study, we report the design of a multifunctional system comprised of ultrasound-responsive NO donor and piezoelectric nanoparticle for non-invasive and wireless neural stimulation. The nanoparticles can generate both NO and direct current only in response to ultrasound. The release of NO temporarily disrupts the BBB, allowing for the accumulation of the systemically administered nanoparticles into brain parenchyma, and the piezoelectrically induced output current stimulates dopaminergic neurons. Systemically administered nanoparticles activated dopaminergic neurons, which released neurotransmitters under high-intensity focused ultrasound, alleviating the symptoms of Parkinson’s disease in an animal model. We verified the crucial role and the mechanism of NO-mediated temporary BBB opening, and show that the piezoelectric nanoparticles can alleviate the symptoms of Parkinson’s disease in the animals without causing overt toxicity.

In summary, we have shown the design of a nanomaterial for the non-invasive stimulation of deep brain tissue and the alleviation of symptoms of neurodegenerative disease in an animal model. This prevented their degeneration and also induced the neurotransmitter release, which significantly alleviates the symptoms of Parkinson’s disease without causing any significant toxicity. The strategy may inspire the development of other minimally invasive therapies for neurodegenerative diseases. We hope that ultrasound-responsive NO-releasing piezoelectric nanoparticles can be further developed into minimally invasive therapeutic approaches for the treatment of neurodegenerative diseases. 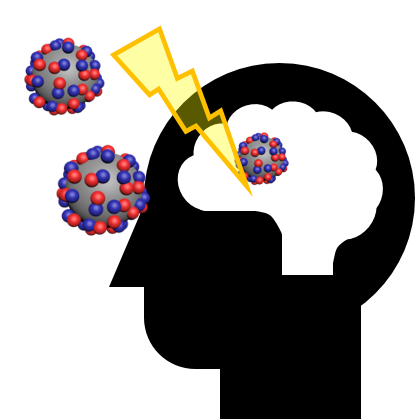