More on the Shelf

In my last post, I wrote about shelf registration filings among small cap biotech companies. I defined a small cap biotech company as one engaged in drug development with a market capitalization of less than $1 billion. Often referred to by their SEC form designation, S-3, shelf registrations are prospectuses that allow companies to issue securities at any time within three years of the date of filing. Data from the past four years, specifically second quarter of 2010 to second quarter 2012, revealed that approximately 1/3 of US small cap biotechs use S-3 shelf registrations. Of those, however, around 80% of shelf-filing companies subsequently employ them, i.e., sell securities and raise additional capital, though the timing and the size of the first financing varies considerably. Thus, a company’s decision to put a shelf in place does indeed foreshadow a likely future financing, usually within six months.

I gathered a lot of extra data in conducting that analysis. Several readers put forth follow-up questions, which I address here. My database includes new shelf filings as recently as the end of Q2 2012, so many of the S-3s under consideration are still active. I should note that in the two months since I last wrote, numerous public companies have raised money by drawing upon securities registered in their S-3s. January 2013 was a particularly robust month for fundraising in the biotech sector. I’ve updated my data to account for the recent financings through January 2013.

@biotechbaumer asked, “Would be interested to know how stock trades post S3 filing until the financing event(s) occurs.”

Similarly, John Dyer of advisory firm Aquilo Partners asked, “What’s the normalized stock price reaction (filing + one day, + 5 days) to a shelf filer?” and “What is the normalized return of shelf users from filing?”

These are great questions, as they address both the market’s initial reaction to a shelf filing and the ability of an S-3 filing company to raise money at higher prices.

Looking first at short-term price movements, I examined the percentage change in share price one day after the S-3 was filed. For the 268 new S-3 filing made between Q2 2008 and Q2012, the average change was -1.5%, but there was wide range of -24.3% to +34.3%. The majority of 1 day price changes were negative; specifically, ~67% of S-3 filers experienced share price decreases the day following their shelf filing. The full distribution is shown in Figure 1. 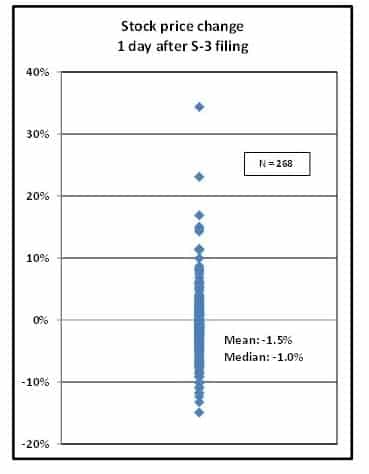 Of course, one day stock movements can be strongly influenced by overall market conditions on the same day. To account for this potential confound, I looked at the concordance between the one day stock movement for the S-3 filer and the one day movement of the NASDAQ Biotech Index (NBI). In the scatter plot blot below (Figure 2), when I plotted the percent change in S-3 filer stock price one day after filing versus percent change of the NBI that  same day. The data are pretty noisy, but I think it’s fair to say that the relationship between the two price movements is weak, which indicates that when the markets are up, the S-3 filer stock price is not necessarily up, as well. Further, if one creates a 2×2 matrix of price movements, it’s clear that even on days when the NBI is up, stock prices of S-3 filers are mostly down. Rarely is the converse true. 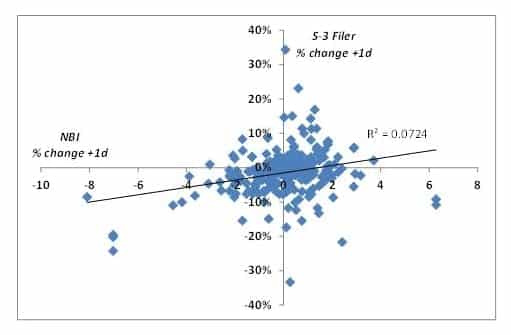 As I wrote previously, S-3s provide a mechanism to sell securities opportunistically. The hope, of course, is that if S-3 filers sell securities, they do so at a higher price to minimize shareholder dilution. How often do companies that finance off the shelf do so at a price above where before the shelf was filed?

Of the 268 S-3 filings, 215 companies subsequently raised money. Slightly less than have half, or 94/215 (~44%), raised subsequent money at share prices higher than the share price at the time of the S-3 filing.  The range in share prices at the first financing varied dramatically, however. As can be seen in the plot in Figure 3, the range was -91.4% to +1,467%, the average change was +13.6%, but the mean was much lower at -8.7%, indicating the effect of positive outliers. Indeed, price decreases are limited to 100%, but share increases are theoretically limitless. 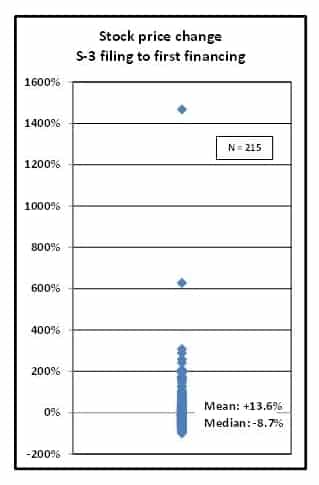 Lastly, @colinmagowan asked, “Did you track lead asset stage and disease, or say # of therapies in clinical trials when S-3 filed?”

I can see where the questioner is coming from; drug development costs vary by therapeutic areas. Thus, companies working in these areas may need to file larger shelves for more money. Further, the capital markets tend to value later stage assets more highly, as they are presumably closer to market. Late stage clinical trials cost more, too, so perhaps shelf filers and shelf size are related to stage of development.

I needed to go back and do some additional work for this question. To avoid the subjectivity of categorizing companies’ therapeutic area, I simply used the classification scheme put forth in each quarterly and yearly roundup issue of BioCentury. I realize that many readers do not have access to this industry publication, but suffice it to say that in these summary issues, the editors of BioCentury sort the majority of public biotech companies by therapeutic focus area. In Figure 4 are the data of S-3 filers, sorted by BioCentury classification, on shelf size and “implied dilution,” or the ratio of shelf size to market cap at filing. There may be hints of differences among companies focused on cardiovascular (CV) and pulmonary (Pulm.) regarding use of S-3s, but the sample sizes (Ns) are somewhat small in those categories. Otherwise, across therapeutic areas, it appears that implied dilution is in the 60-80% range on a shelf size of $50-$75 million dollars. (Recall that I define implied dilution as the ration of shelf size to market cap at the time of filing. The implied dilution is therefore a measure of the dilution that current shareholders would experience if all of the securities in the shelf were issued.) 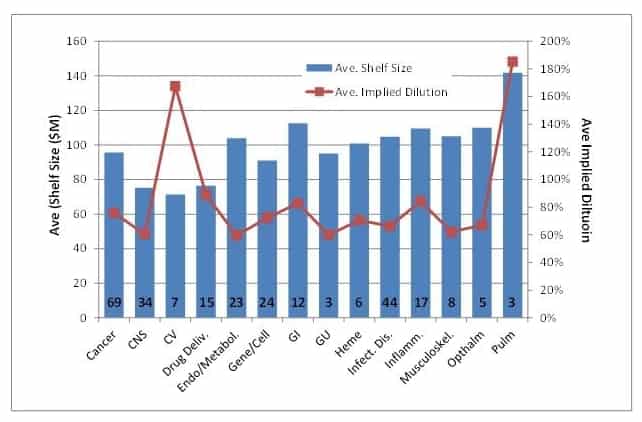 So, putting it all together, I’d say the takeaways are: