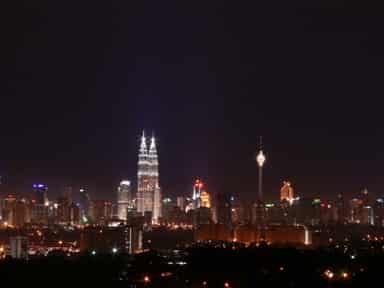 Malaysia is located in Southeast Asia with two distinct regions, namely Peninsular west Malaysia and East Malaysia. It has a population of approximately 28 million, and is famous for elegant and gigantic “PETRONAS Twin Towers” located in the heart of Kuala Lumpur (pictured above, at night).

Malaysia also has one of the best economic records in Asia, with GDP growing an average 6.5% for almost 50 years. The economy has traditionally been fuelled by its rich natural resources, mining and agriculture, but is expanding in the sectors of science, tourism, commerce and medical tourism. It is one of the largest exporters of petroleum, tin, rubber and palm oil in the world. It is the third largest economy in ASEAN (Association of Southeast Asian Nationals) and 29th largest economy in the world. The country is multi-ethnic and multi-cultural (Malays, Chinese and Indians) and its freedom of religion is protected by a secular constitution. Bahasa Malaysia or Malay language is the national and official language of the country, though English is widely used in commerce and industry.

The infrastructure of Malaysia is one of the most developed in Asia. The country has seven international ports and 200 industrial parks dedicated to science and technology industries. Malaysia has 58 airports (36 on East Malaysia and 22 on Peninsular Malaysia), with 37 of them having scheduled passenger service on commercial airlines. Malaysia has 8 international airports and a well-networked telecommunication system in both rural and urban areas. The country is self-sufficient in energy production from oil and natural gas.

Malaysia encourages foreign investment in biotechnology and offers many incentives and advantages to foreign investors. The national interest in biotech started in the 5th Malaysian Plan (1986-1990) but was given due recognition and emphasis in the 8th Malaysian Plan (2001-2005). Malaysian Biotechnology Corporation Sdn Bhd (BiotechCorp) is the custodian of national biotechnology policy (NBP) and was launched in 2005 to provide a development framework for the industry over three phases. Those phases are:

Since the launch of the NBP in 2005, the Malaysian biotechnology industry has recorded a total investment of $1.3 billion (RM 4.5 billion) by 2009. Out of this investment, 57.8% was funded by the government, while the remainder was funded by the private sector. The contribution of the biotechnology industry toward the gross domestic product (GDP) in 2009 was estimated at 2%.

In terms of total employment, it is estimated that 54,000 people were employed in the life-science and biotechnology-related industry in 2009. As of Sept. 30, 2009, a total number of 349 biotech companies were identified in Malaysia, a three-fold increase from 117 companies in 2005. Out of thse 349, 41% were involved in ag-biotech, 38.4% in healthcare biotech, and the remaining (20.6%) in industrial biotech.

But, due to the higher entry barriers for medical devices and molecular diagnostic kits, the extensive product regulations and procedures for registration, and the costs of manufacturing and exports, healthcare biotech contributed only 31.6% of revenues. Of the total investment, the industrial biotech sector has the highest investment dollars, with close to $300 million (RM 1 billion). Total investment in agricultural and healthcare biotech sectors is $287.5 million (RM 1 billion) and $235.1 million (RM 822.8 million), respectively. This investment includes contribution from the US, UK, France, Germany, Italy, Belgium, India, China, Hong Kong, Singapore, Thailand, Australia, New Zealand, Japan and Taiwan.

There is a tremendous base building in Malaysia. My next post will explore in more detail the rules around launching a company there.