The emerging technique of four dimensional (4D) biofabrication aims to create materials that shape-morph in response to external stimuli, along the dimension of time1. The novel biomimetic 4D printing (bio 4DP) technology has potential to engineer artificial tissues resembling their biological counterparts for applications in regenerative medicine and restore damaged or diseased tissues in patients (in vivo)2. Bio 4DP technology is based on existing methods of 3D bioprinting, with additional ability to transform its shape in response to biological/physiological stimuli, to accurately mimic natural (native) tissue dynamics and micro-structure. Three dimensional (3D) printing technology, first patented in 19863 based on the method of stereolithography, has progressed over the years to enable 3D fabrication of biological structures termed 3D bioprinting4 with recent advancements to the next stage of bio 4DP5. The advanced bio 4DP technology has potential applications in biomedical engineering, broadly including soft-robotics and biomedical device development, drug delivery and tissue engineering6. This post will briefly detail 3D bioprinting techniques that lay groundwork to emerging 4D bioprinting, shortcomings of 3D bioprinting related to challenges faced in biological systems (in vivo) and the emerging bio 4DP technique based on stimuli-responsive biomaterials and programmable bioinks, to enable next-generation bioprinting.

A variety of protocols exist for 3D model printing since its inception, of which, ‘fused deposition modeling’ is most common due to low cost and simplicity 7. Many other versatile 3D printing techniques including laminated object manufacturing, selective laser melting and selective laser sintering were developed thereafter for increased finesse and resolution of end product 5. One of the most recent applications of 3D printing in biomedicine was when paediatric heart surgeons at the New York-Presbyterian Congenital Heart Center developed a model of a deformed infant heart diagnosed at 35 weeks of gestation based on medical imaging, to accurately navigate convolutions in the ‘ping-pong sized’ structure for meticulous heart surgery in the new-born (Figure 1). 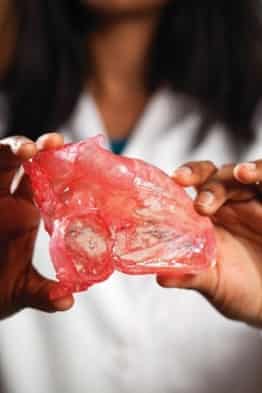 The conventional protocols allow for non-biological 3D models commonly composed of thermoplastics, ceramic and metals. For biomaterials embedded with cellular components, common techniques of 3D bioprinting include; inkjet, microextrusion and laser-assisted printing5. More recently these methods were further developed to enable fabrication of biological structures with multi-materials for 3D bioprinting8. Some of these 3D bioprinting models are encapsulated with cells and bioactive agents to engineer biomimetic tissues such as blood vessels, liver, heart and tumour environments4,8. Over the years, 3D bioprinting technology has progressed to include hydrogel materials and synthetic biodegradable polymers with embedded cells and bioactive molecules, assimilated with 3D bioprinters4,8. The main steps in the bioprinting process (Figure 2) include patient imaging, decision on a design approach, choice of materials and cells to be integrated, and printing the desired tissue construct via inkjet, microextrusion or laser-assisted methods (Figure 2, panel 5)4.

Figure 2: Step 1 and 2) Medical images of damaged tissue are used to guide the design of bioprinted tissues. Step 3) Common materials selected include synthetic polymers (such as hydrogels embedded with bioactive cells), natural polymers and decellularized extracellular matrix (ECM). Step 4) Cells selected for integration can be mature/differentiated, pluripotent or multipotent stem cells. Step 5) biological components will be integrated with; inkjet, microextrusion or laser-assisted printers for bioprinting. Step 6) depending on the tissue type formed, some may require a period of maturation in a bioreactor prior to transplantation, or will be used in lab (in vitro) for organ-on-chip applications. Image from reference4.

Most conformational changes of natural biological tissue within the human body are caused by built-in mechanisms that respond to internal/external stimuli to add a fourth dimension to biological systems. In contrast, conventional 3D structures fabricated by 3D bioprinting are built to be stable, featuring static properties and behaviours, insufficient for stimuli-responsive applications in biomedicine. The strategy of bio 4DP is to integrate 3D bioprinting with biologically active biomaterials, programmed to shape-morph according to a desired stimulation within a defined period of time.

The simplest mechanism adopted for 4D bioprinting includes materials such as hydrogels capable of swelling to achieve folding and unfolding under different conditions5. Further advances in the technique has allowed materials capable of expanding to different degrees, where the folding direction and angle of the joints can be controlled by regulating material properties6. A recent 4D biomimetic printing technique combined hydrogel materials embedded with cellulose fibrils to form a composite bioink that fabricated shape-morphing constructs analogous to natural flowers, bracts and leaves, transforming under stimulus6. For example, using this biomimetic 4D printing technique, it is possible to fold the patterns printed with discrete bilayer orientations in each petal, into 3D flower like structures, as seen in video 1. The resulting 3D morphology post-swelling in water resembles the orchid (Dendrobium helix) with several distinct types of shape change, for four dimensional functionality.

Similarly, a magnetic material fabricated for 4D printing with an ink composed of the polymer - polyurethane acrylate doped with alumina platelets, can respond to an externally applied low magnetic field9. These pioneering examples demonstrate the possibility to integrate time scale into 3D printing for transformation along an intended path in 4D. However, the technology should still overcome major challenges to mimic more complex biodynamics for applications in vivo5. Initially, a library of biocompatible, stimuli-responsive biomaterials must be developed, exhibiting 1) cytocompatibility, 2) ability to provide mechanical support, and 3) enable proper biophysical/biochemical signalling for the cells to induce programmed deformation, to achieve 4D bioprinting for extended applications in biomedicine5.

Thereafter, a key step in bioprinting is for the bioink to be developed based on the biomaterial of interest, i.e., the bioink can be both naturally derived and synthetic. Ideally the bioink must meet 4 key standards to ensure 4D biofunctionalization of end product: 1) strong biocompatibility, 2) optimized rheological parameters to ensure suitable printability, 3) stability to ensure architectural integrity and 4) interplay between cellular viability/function to ensure cells within bioink can survive the stimuli necessary for shape-morphing of 4D bioprinted end-product10. So far, a library of biocompatible, 'smart-biomaterials' displaying transformation mechanisms based on cells or stimuli exists (Table 1)5.

Table 1: A library of biocompatible, biomimetic materials displaying transformation mechanisms based on cells or external stimuli, for potential integration with 4D printing technology5.

Conceptually, the bioink will be based on the material of interest, optimized and programmed to respond to the appropriate electric, magnetic or optical stimulation, to achieve desired four dimensional biofunctionalization5. However, at present the mentioned stimuli-responsive biomaterials have only been thoroughly investigated for their properties and use to generate constructs via conventional approaches of biofabrication, thus their direct translation to bioinks for bio 4DP may not be straightforward5,18.Prior to making the great leap into an exciting new field, the properties of stimuli-responsive biomaterials must first be engineered to comply with requirements for use as bioinks and achieve effective 4D printing5,19. The complexities of programming material derived bioink in the lab, are detailed at the Microsoft research lab with conductive inkjet printing suggested as a solution, were it more accessible to researchers19. In recent experimental investigations, Tibbits and colleagues18 conducted key studies on the design of active 2D printed multi-materials, capable of self-evolved movement given environmental stimuli, although the printed objects were reported to degrade severely after repeated programmed cycles of folding/unfolding18.

Four dimensional biofunctionalization is an interdisciplinary concept; the biocompatible fabrication process requires complex programmability to ensure multiple stimuli response, in addition to the extra dimension of time5,18. The technology has potential to become the next-generation bioprinting process by merging stimuli-responsive smart biomaterials with innovative instrumentation, for tissue engineering applications in regenerative medicine and to create transformable objects such as soft robotics with wide-ranging advanced applications in biomedicine19.